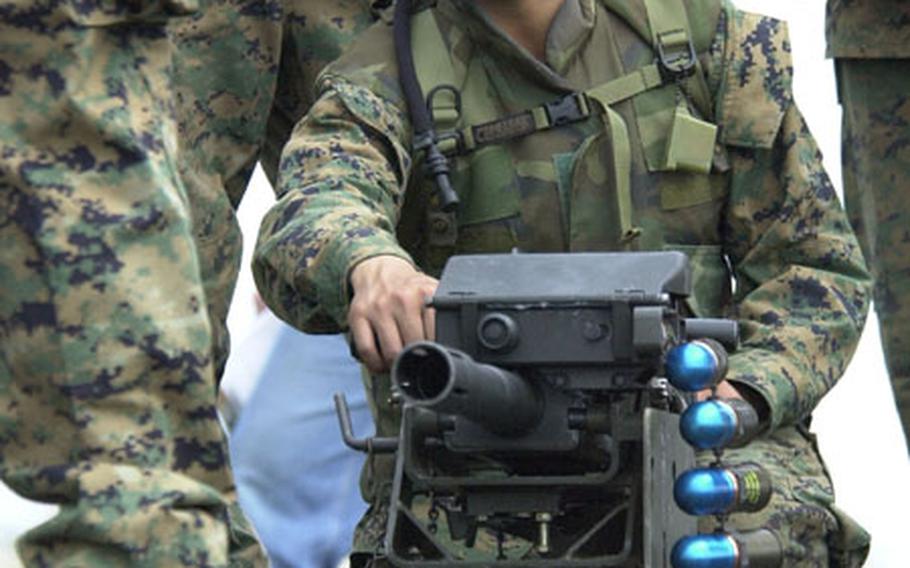 Pfc. Steven Nguyen pulls the handle of an MK-19 automatic grenade launcher during a briefing for the weapon Friday during the Cloud Warrior 2004 exercise at Camp Fuji. Members of Marine Wing Support Squadron 171 from Iwakuni Marine Corps Air Station this week are wrapping up the exercise. (Jim Schulz / S&S)

Pfc. Steven Nguyen pulls the handle of an MK-19 automatic grenade launcher during a briefing for the weapon Friday during the Cloud Warrior 2004 exercise at Camp Fuji. Members of Marine Wing Support Squadron 171 from Iwakuni Marine Corps Air Station this week are wrapping up the exercise. (Jim Schulz / S&S) 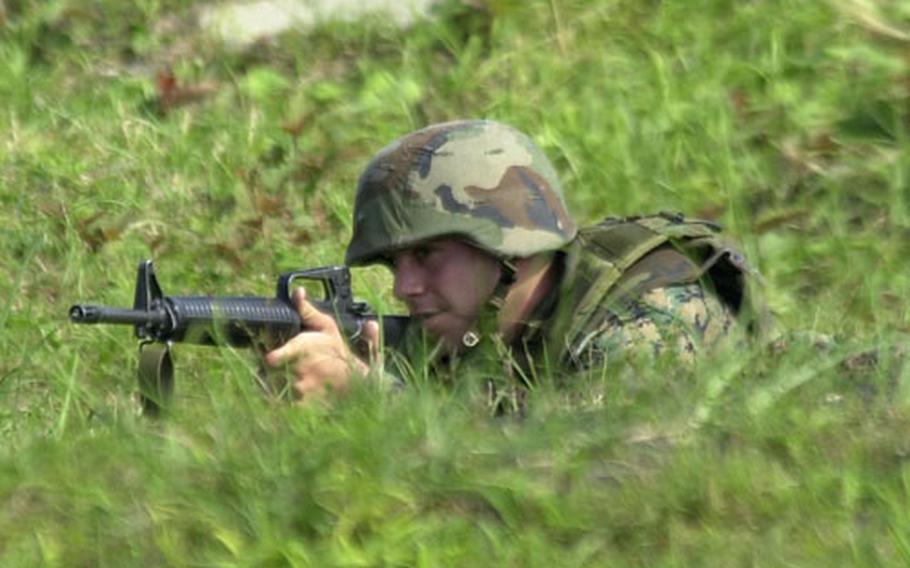 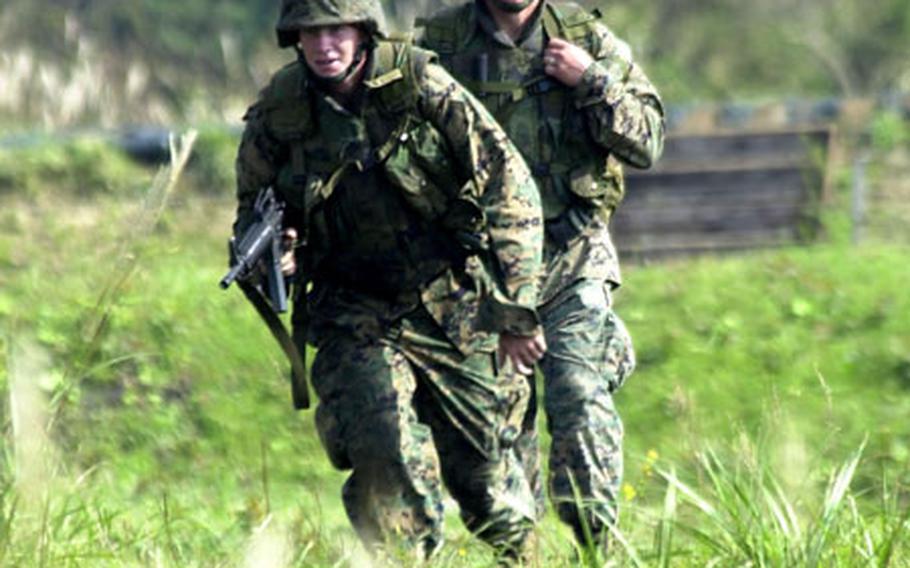 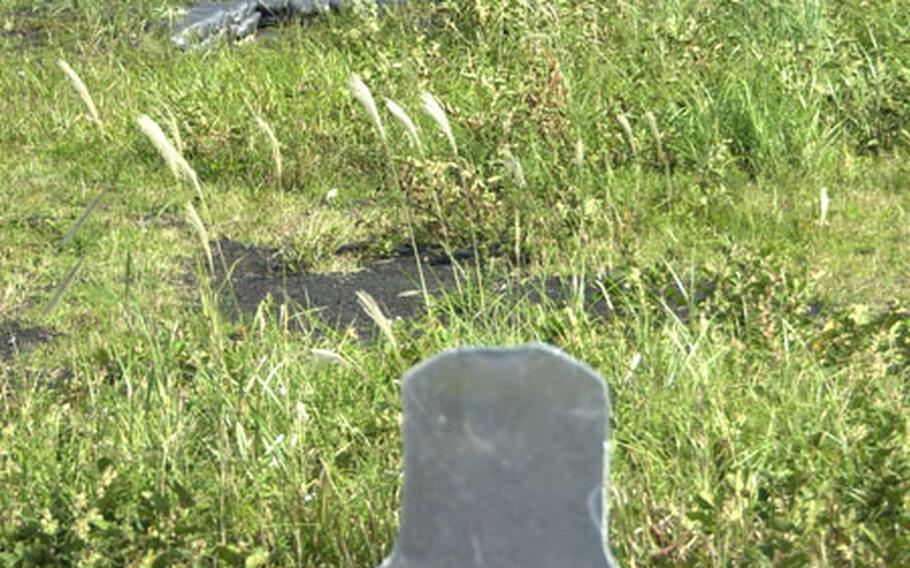 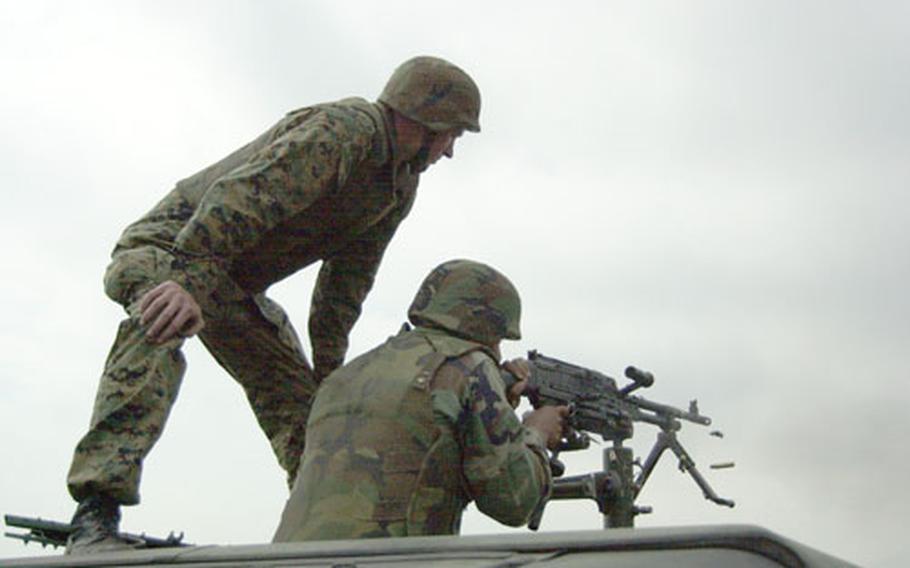 And it&#8217;s essentially the only time all year the squadron &#8212; with companies specializing in airfield operations, motor transport and engineer operations &#8212; gathers for a full-strength training session.

The squadron arrived at Camp Fuji on Aug. 26.

Since, the Marines have scaled Mount Fuji and endured two typhoons and three earthquakes.

In between, they said, they managed to refine the tools that let them provide quality aviation ground support and air base ground defense.

The squadron rehearsed defensive tactics for seven days before hitting the ash-coated valleys near Mount Fuji last week for live-fire and maneuvers training.

&#8220;In our defensive training, we started with patrols and progressed through a company defensive package.&#8221; That culminated in a two-day exercise &#8220;where we moved to, occupied and defended the Camp Fuji Main Airfield from an insurgent-type enemy similar to those currently in Iraq.&#8221;

Friday, the squadron incorporated all the training into a &#8220;fire and maneuver&#8221; session. On one range, squads carrying M-16s and other light machine guns took turns engaging two berms loaded with enemy &#8220;targets.&#8221; They had to negotiate rolling, rough terrain that stretched just longer than five football fields. As they moved in, a twin set of M240Gs &#8212; the &#8220;talking guns&#8221; &#8212; sprayed cover fire from bunkers to protect their advance.

In Iwakuni, most of the Marines work as mechanics, welders and heavy equipment operators. &#8220;It&#8217;s very important that they get this infantry training and re-familiarize themselves as much as possible,&#8221; she said. &#8220;Every Marine is a rifleman first. When they go into combat, no matter what their MOS is, they&#8217;re warriors first.

&#8220;The Marines here have done very well this week,&#8221; she said, given that the exercise requires skills they seldom exercise.

Cpl. Ryan Shaner and Cpl. Jasman Duque, heavy equipment operators with the squadron&#8217;s Engineer Operations Company, took part in convoys while serving in Kuwait together. They said young Marines headed for war zones should find the skills being practiced invaluable.

Squadron members will conduct routine maintenance this week. Friday, after a morning hike, they&#8217;ll break around lunch for weekend liberty. Many plan to visit Tokyo before returning to Iwakuni on Monday, unit members said.

Because of this year&#8217;s Cloud Warrior, Escalante said, &#8220;We now have a basis to grow from, in our ability to not only conduct defensive operations and an airbase defense but also what is involved to command &#8230; such operations.

&#8220;The big take-away is that each company now understands what their role is in this mission, how it interrelates with the roles of the other companies and how it is controlled at the squadron level. &#8230; This operation also allowed our junior leaders to practice the small-unit leadership. &#8230; They were able to be the front line of leadership in the squadron, ensuring their Marines are well trained and well taken-care-of while training.&#8221;