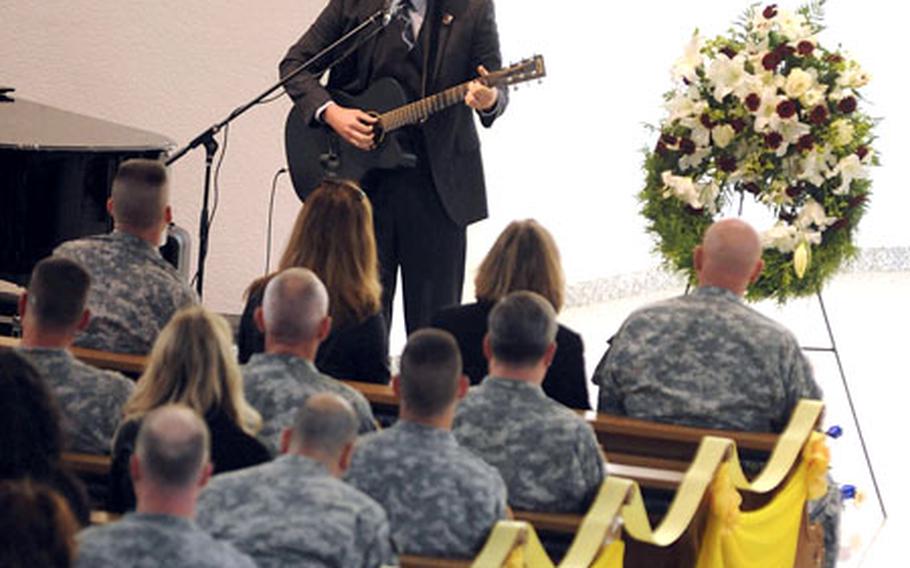 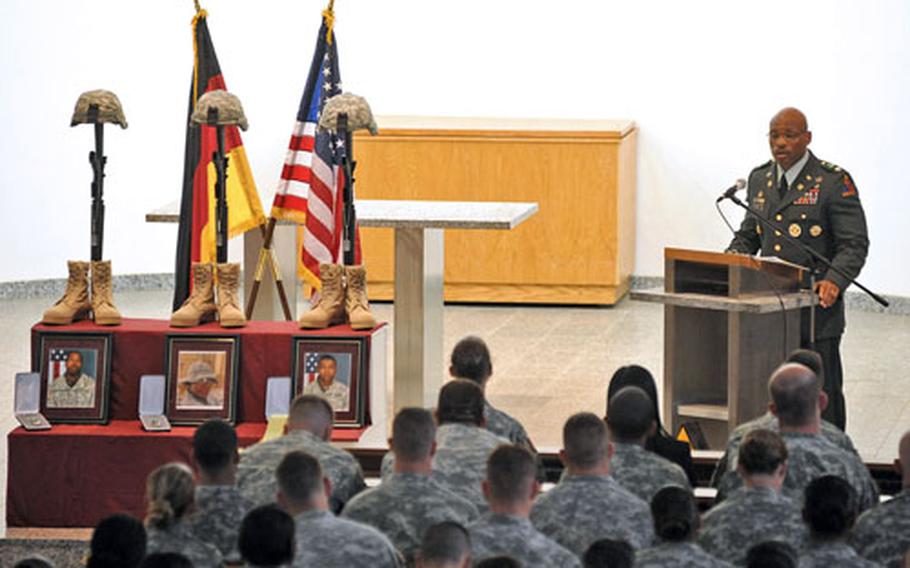 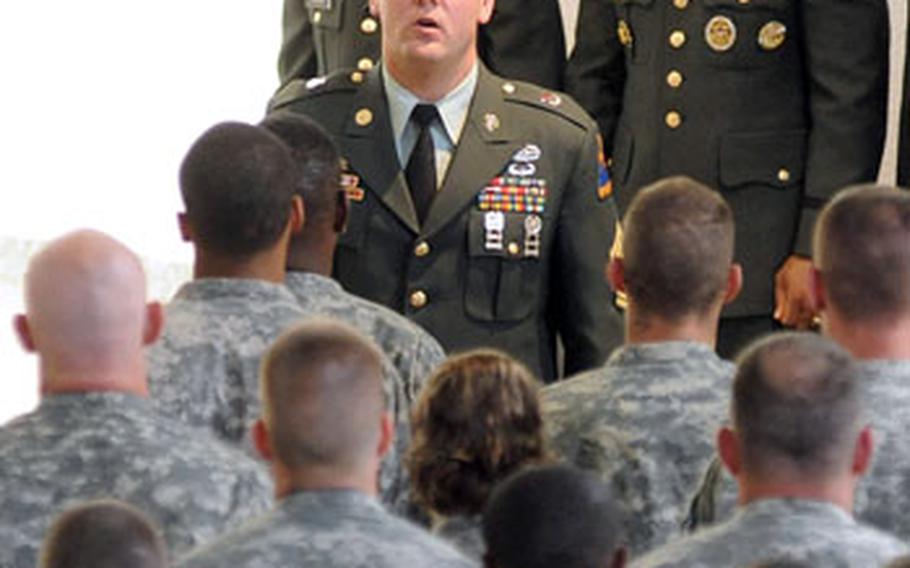 BAUMHOLDER, Germany &#8212; It was a somber day as soldiers remembered their comrades who died on the battlefield, and the three soldiers recently killed in a car crash.

Hundreds packed the pews of Chapel One to pay tribute to Sgt. Alexander Westbrooks, 26, Spc. Laron Gadson, 24, and Spc. Michael S. Clark, 22, all who died Sunday in a single-vehicle accident on the autobahn north of Kaiserslautern. They had returned from a deployment in Iraq only days before as part of Company B, 47th Forward Support Battalion, 2nd Brigade Combat Team, 1st Armored Division.

In his eulogy, Capt. Arthur Ball recalled how he reacted when he heard that they had been killed.

"I simply could not believe it," he said. "They were all too young."

Westbrooks, of New York City, was an automated logistical specialist. He had just finished his second deployment to Iraq.

"He was the smallest dog in the yard," Herbert said. "But he was the loudest. He was always barking, always yelling, and you always knew he was there."

Gadson, of Greensboro, N.C., was a light-wheeled vehicle mechanic. He had just completed his first deployment to Iraq after joining the Army in 2006. He is survived by his daughter, Alanna.

"The love he had for his daughter is what got him through the rough times in Iraq," said 1st Lt. Robert C. James. "He talked about her all the time."

Clark, of Douglas, Ga. was the youngest, but his personality left an impression on everybody, including the battalion commander, Lt. Col. Michel Russell. Russell recalled when Clark ambushed him with a video camera after a friend of Clark&#8217;s had asked the commander for a hug.

"Out pops Clark with his video camera," Russell said. "Then he jokingly, I hope, reminded me to go check YouTube."

Clark joined the Army in 2006, and was also serving on his first tour in Iraq as an electronic device repairer.

Sobs were heard as the names of the three soldiers echoed in the church.

"Revel in those memories because it keeps them alive with us all," Russell said. "No one in here has to grieve alone. We are all a family."

Before the memorial service, the mournful tune of bagpipes rang out across Baumholder in a tribute to seven soldiers who died during a deployment with Task Force 1-6. Soldiers filed past pictures of the fallen men, five of whom died in combat. It was a hard deployment for the soldiers who had the unenviable task of finishing the construction of a 3-mile wall across the southern part of Sadr City while facing constant fire from the Mahdi Army, a Shiite militia.

"It was a tough spot," said Lt. Col. Brian Eifler, battalion commander. "Some of these guys gave their lives in Sadr City. But it could have been a lot worse and we made a difference. It&#8217;s not Disneyland now, but it&#8217;s much better."

Capt. Jonathan Martin, commander of Company D, said the pictures will hang in a corridor in their new headquarters.

"I think it&#8217;s especially important for the young soldiers to see them," he said, "so that they know soldiers left behind are not forgotten."

A memorial tribute on Minnick Field was also held Wednesday evening for all the soldiers from the 2nd Brigade Combat Team, 1st Armored Division, who have died serving in Iraq since 2003.

At the memorial dedication, a plaque was unveiled inscribed with each of the names of the 60 soldiers who died since the start of Operation Iraqi Freedom. Each name was called as a bell was rung. Then the soldiers crowded around the plaque, some saluting it, other just placing their hands on the names of their fallen friends.