Hundreds of bikers gather for festival in S. Korea 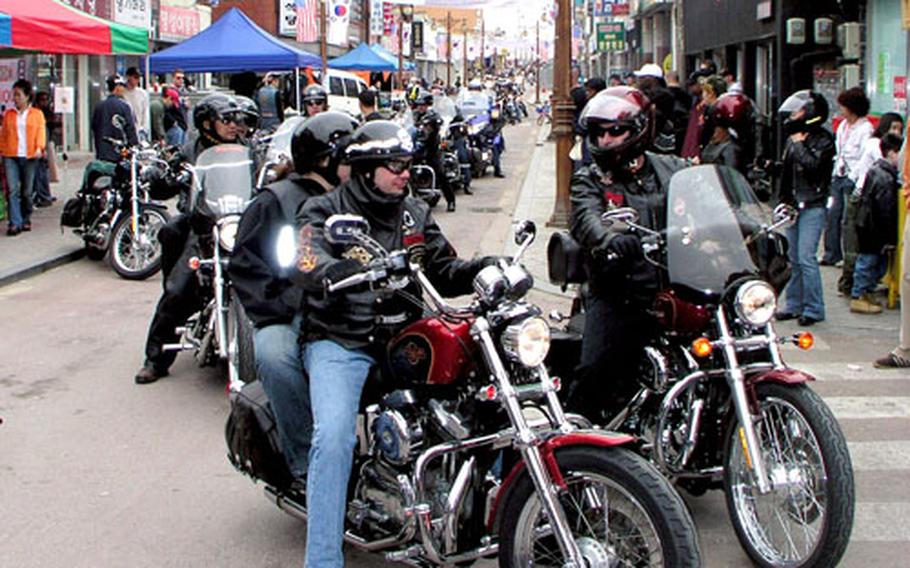 Near Camp Humphreys in South Korea on Saturday, a long line of bikers moves down Rodeo Drive in the Anjung-ri section of Pyeongtaek City during second annual bike fest. (Franklin Fisher / S&S)

Near Camp Humphreys in South Korea on Saturday, a long line of bikers moves down Rodeo Drive in the Anjung-ri section of Pyeongtaek City during second annual bike fest. (Franklin Fisher / S&S) 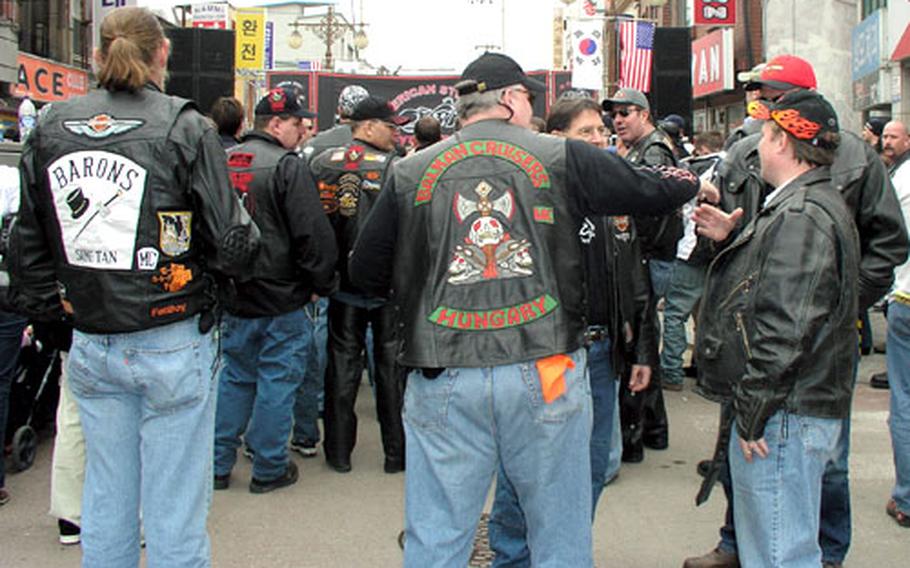 Biking regalia was much in evidence. (Franklin Fisher / S&S)

PYEONGTAEK, South Korea &#8212; With hundreds of motorcycles parked side-by-side for blocks and rock music booming from loudspeakers, Army Cpl. Brad Fatuesi and a buddy stopped for a look around.

The two, stationed down the street at the Army&#8217;s Camp Humphreys, were among onlookers who came out on a chilly, overcast Saturday afternoon to view the enthusiasts and their machines gathered on a long street known locally as Rodeo Drive.

The second annual Pyeongtaek Bike Fest drew about 400 enthusiasts, 380 of them actually riding their bikes.

The event also drew knots of onlookers, most of them servicemembers, three here, six there, some with small children, taking in the contests and eyeing the food and T-shirt concessions.

The aim of the two-day festival, which began Friday with a catered party, was the sheer love of biking and its pleasures, said Jason Montgomery, a defense contractor who also is president of the American Steel Motorcycle Club&#8217;s Korea chapter.

American Steel and Easy Riders Korea in Seoul co-sponsored the event, he said.

Saturday&#8217;s fun included a 45-minute cruise that included about 250 bikes, followed by a beer-drinking competition in which contestants stood at a big outdoor table and on signal gulped down a glassful.

And what self-respecting biker bash would be complete without a tattooing contest?

About half the participants this year were Korean, Montgomery said.

Besides the bike-related events, vendors were set up on the street selling everything from hot dogs and chicken-on-a-stick to beer, T-shirts and biker jackets.