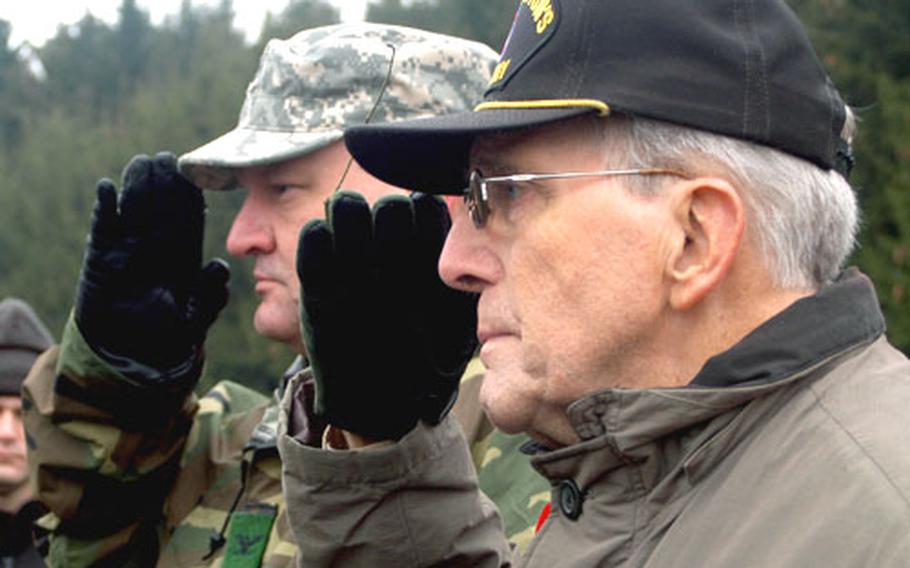 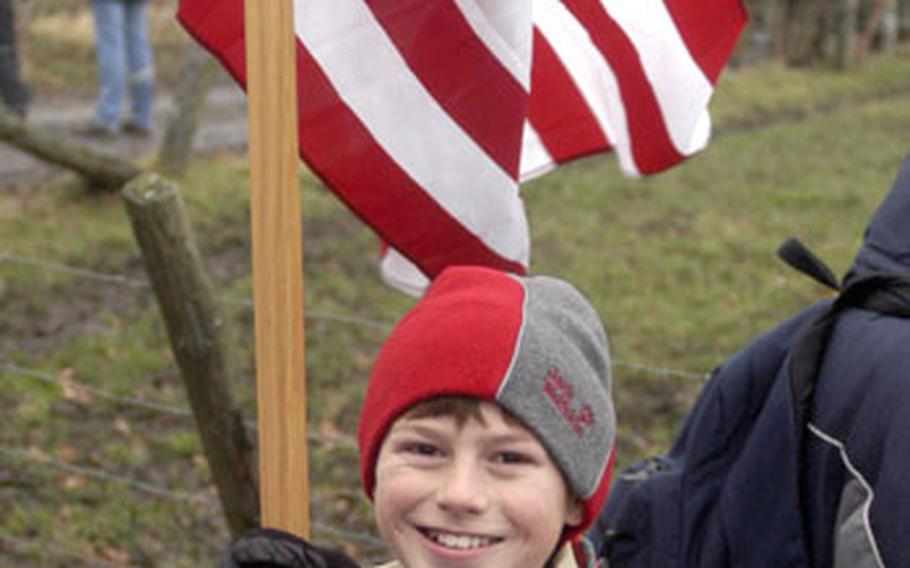 Patrick Gelbach, a Cub Scout from Stuttgart, Germany, carried the American flag during the Battle of the Bulge walk. (Kevin Dougherty / S&S) 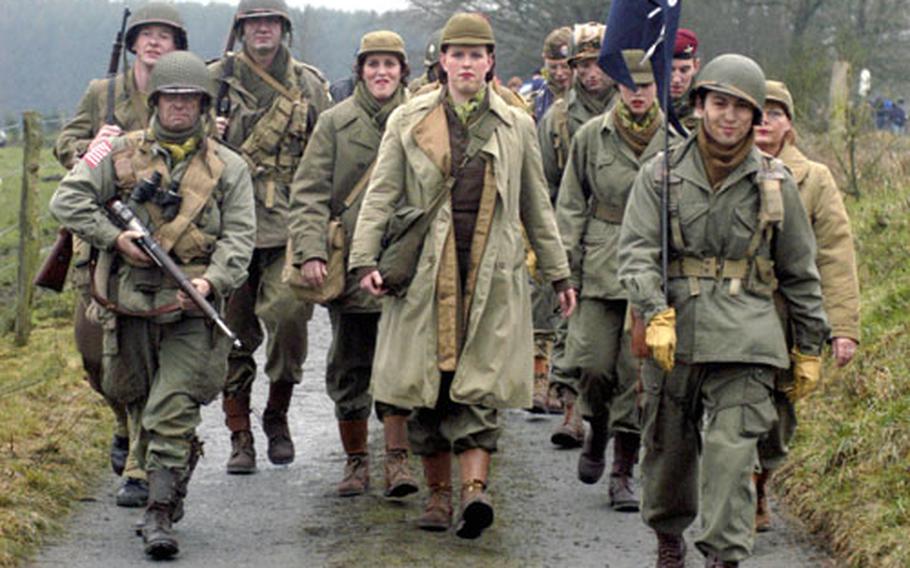 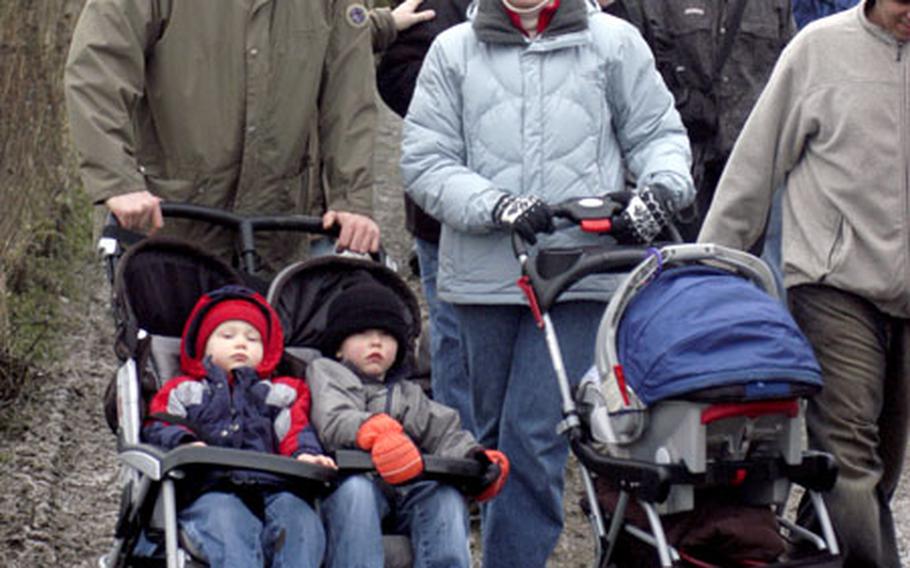 Army Capt. Keith Koistinen, a veterinarian from Stuttgart, Germany, and his wife, Kaarina, pushed strollers through some muddy conditions Saturday during the Battle of the Bulge walk. With them are their children, from left, Lyle, 2, Carson, 3, and Neal, 6 months. (Kevin Dougherty / S&S) 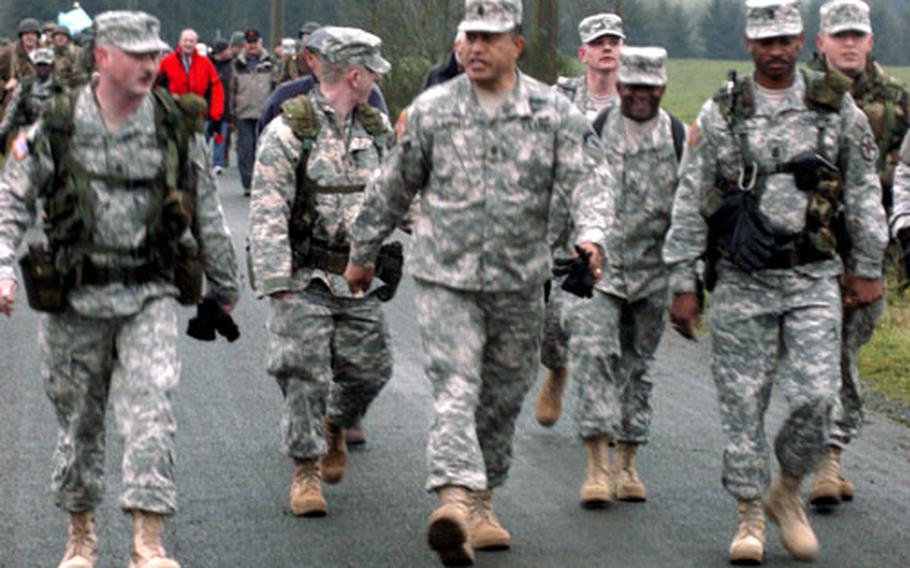 But on Saturday, the Army officer joined about 2,300 people in the annual perimeter walk marking the 62nd anniversary of the Battle of the Bulge in Bastogne, Belgium.

While Lorenzen&#8217;s journey from Baghdad to Bastogne probably represents the greatest distance covered by any walker this past week &#8212; certainly by any U.S. servicemember &#8212; other Americans traveled near and far to get here, too.

Despite the wind, and the cold, and the muck, one-third of the people who participated in the walk were Americans. Many of them are stationed in the Benelux or at nearby military bases in Germany, such as Geilenkirchen or Spangdahlem Air Base. But there were also considerable numbers from places such as Giessen, Stuttgart and Heidelberg.

Many soldiers and airmen who took part used words and phrases such as &#8220;honored&#8221; and &#8220;hallowed ground&#8221; to describe Bastogne and the Ardennes Forest. And those sentiments were accentuated by the hundreds of World War II re-enactors who are drawn to this Belgian city every December.

&#8220;It was great to take a step back in time and honor those men,&#8221; said Army Sgt. 1st Class David Cardona, who came up from Kaiserslautern, Germany, with his family.

Other servicemembers have similar ties. One of them was Spc. Rebecca Jones of U.S. Army Garrison Benelux in Chievres.

Some said they believe the walk and the other activities of the day have taken on greater significance now that the nation is at war.

Remarkably, the commemorative events draw many more non-Americans than Americans. Around the Bastogne sports hall, where the walk is organized, the participants ranged from young Polish soldiers to British retirees. And just about everywhere on the streets of Bastogne one could see U.S. flags flapping in the wind while hearing French being spoken.

The memorial walk covers a different section of the Allied perimeter around Bastogne each year. North of town this time, the walk ended in the early afternoon at the monument to the 506th Parachute Infantry Regiment. Cub Scout Pack 1 from Heidelberg was given the honor of laying a wreath at the foot of the monument. Several other packs and troops from Germany were on hand as well.

The commemoration typically falls on a Saturday in mid-December, the better, organizers say, for the people who want to attend. This year, however, the events fell on the exact day of the start of the campaign, one that Hitler hoped would turn the tide of the war.

More than 1 million combatants participated in the battle, which was waged over a front several hundred miles from Dec. 16, 1944, to Jan. 25, 1945. Nearly 77,000 Americans were killed, missing, wounded or taken prisoner. The Germans lost considerably more people and equipment.

Bastogne became forever famous for the American&#8217;s valiant defense of the city, a place at a strategic crossroad that was encircled by German forces but not conquered. The Battle of the Bulge and all its myriad of stories large and small became an enduring symbol of courage and resolve.

&#8220;The locals here are very appreciative. They are always kind and thankful,&#8221; said Army Chief Warrant Officer 3 Heath Hielsberg, who visited Bastogne on Saturday with his father, Rodger.