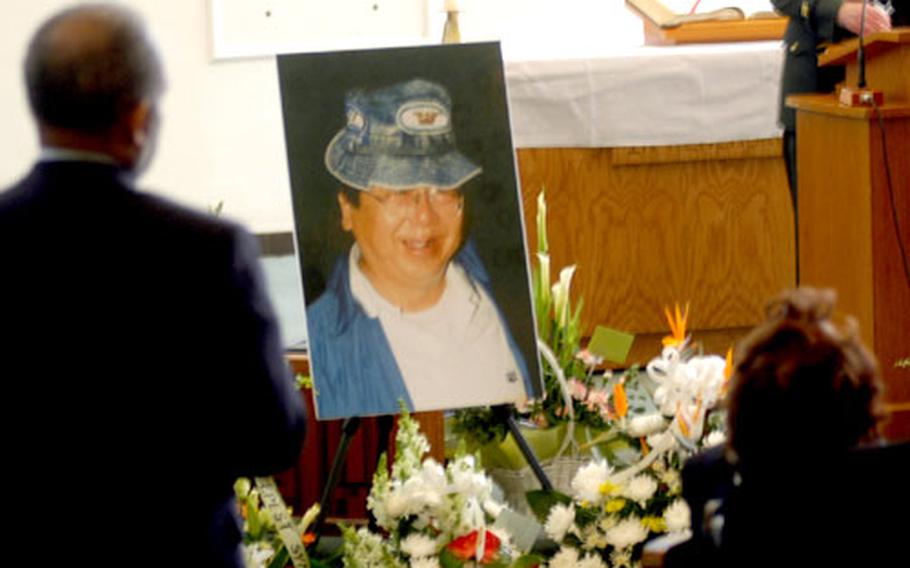 Hundreds of mourners came to Yongsan Garrison’s South Post Chapel on Tuesday to pay respects to Ray Ueno, a well-liked civilian who worked for the U.S. government for 47 years, who died Saturday. (Jeremy Kirk / S&S)

Hundreds of mourners remembered that smile at the South Post Chapel on Tuesday morning as they said goodbye to Ueno, who died Saturday from head injuries after he was struck on his moped by a vehicle March 24.

Flower bouquets surrounded a large photo of Ueno, wearing a blue beach cap and his usual smile. Ueno had enough friends for 10 men, said Capt. John Wernau, who gave a tearful eulogy during the ceremony.

The 68-year-old telecommunications manager for the 1st Signal Brigade had worked for the government for more than 47 years. He served in the U.S. Army from 1956 to 1966 as an administrative clerk and draftsman. In the late 1950s, he helped the U.S. Army Corps of Engineers in the architectural and landscaping design of 8th Army&#8217;s golf course at Yongsan. The United States returned control of that land to the South Korean government in the early 1990s; it is to be the site of a national museum now under construction.

After leaving the service, Ueno worked on Okinawa as a draftsman, frequently traveling to South Korea, Japan, Taiwan, Vietnam, Thailand and the Philippines. Starting in March 1974, he worked in South Korea with the U.S. Army Training Support Activity-Korea before coming to the 1st Signal Brigade in 1983.

Ueno was an award-winning photographer, taking tranquil photos that captured the nuances of peoples&#8217; lives, friends said. He also was a calligrapher and cartoonist, teaching those skills to others at Yongsan Garrison.

&#8220;About the only time he wasn&#8217;t smiling was when he was trying to keep a straight face,&#8221; said friend Byron Ogata, who had to pause for minutes during his portion of the ceremony.

About every six months, Ueno ran a photography forum at the crafts shop on base. He did it for free, merely out of the love for his hobby and his desire to help other people become better photographers, said Steve Oertwig, a friend.

Attendees lingered in the chapel to see examples of Ueno&#8217;s work along with personal photos. In one, Ueno sat at a desk wearing a camouflage military helmet with a pipe sticking out of his mouth. The date was 1976, the location was South Korea and the in-jest caption: &#8220;War is hell.&#8221;

&#8220;Ray Ueno has been an integral member of the Army, the 1st Signal Brigade, and the Yongsan and Seoul community,&#8221; Col. Ronald Bouchard, commander, stated in a news release. &#8220;I offer our heartfelt condolences to his family and friends.&#8221;