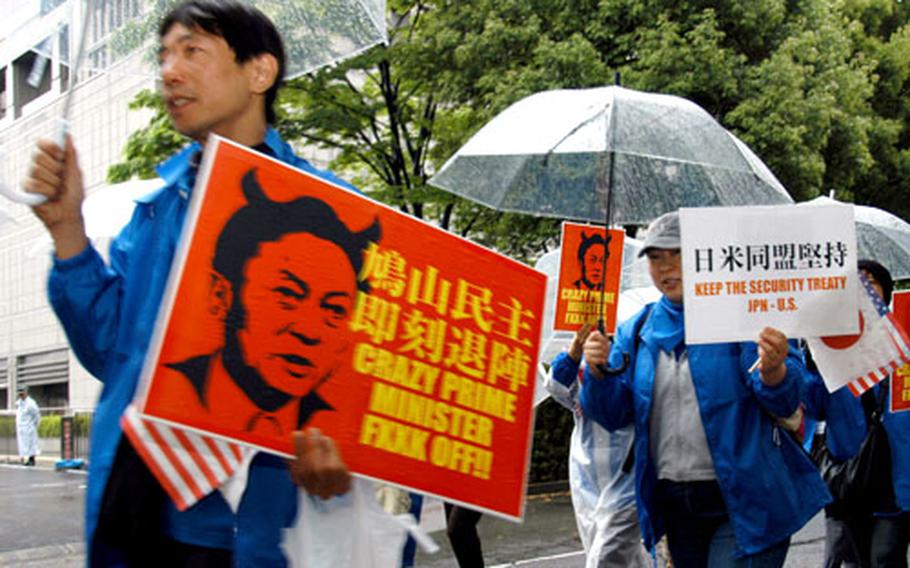 Protesters march in Tokyo on Tuesday, calling for a stronger U.S.-Japan alliance and Japanese government commitment to the 2006 agreement to close Marine Corps Air Station Futenma and move it to a new facility to be built at Camp Schwab. (Hana Kusumoto / S&S)

TOKYO &#8212; Carrying signs that read &#8220;Thank you Marines&#8221; and &#8220;Japan needs U.S.,&#8221; hundreds of demonstrators gathered here Tuesday to show support for a 2006 U.S.-Japan realignment agreement to close Marine Corps Air Station Futenma on Okinawa and move its operations to a rural part of the prefecture.

The group marched to the Japan Diet building to submit a resolution calling for the Japanese government to commit to moving Marine air operations to Camp Schwab on Okinawa&#8217;s rural northeast coast. It also called for Prime Minister Yukio Hatoyama&#8217;s resignation.

&#8220;It is a major problem when a person who is in charge of a country doesn&#8217;t recognize that an agreement made between countries has a priority before opinions by local government leaders,&#8221; stated the resolution.

Most of those participating Tuesday were affiliated with the conservative Happiness Realization Party, which was formed just before the Lower House election in August. The party holds no seat in the Diet.

The rally was held while Hatoyama struggles to find a solution for the Okinawa basing issue. Last week, he said he could not keep his campaign promise to move Futenma&#8217;s operations off Okinawa.

Tuesday&#8217;s demonstrators also called for a stronger alliance between the U.S. and Japan and for U.S. military forces to stay in Japan.

&#8220;Having Marines serves as a deterrence,&#8221; retired Japan Maritime Self-Defense Force officer Ryunosuke Megumi told the crowd during the rally. &#8220;Okinawa was secure because of the U.S. Forces.&#8221;

The resolution stated that it &#8220;is highly [possible] that China will seek the Senkaku islands and main island of Okinawa if the U.S. military were to leave Japan.&#8221;

Stars and Stripes reporter David Allen contributed to this report.