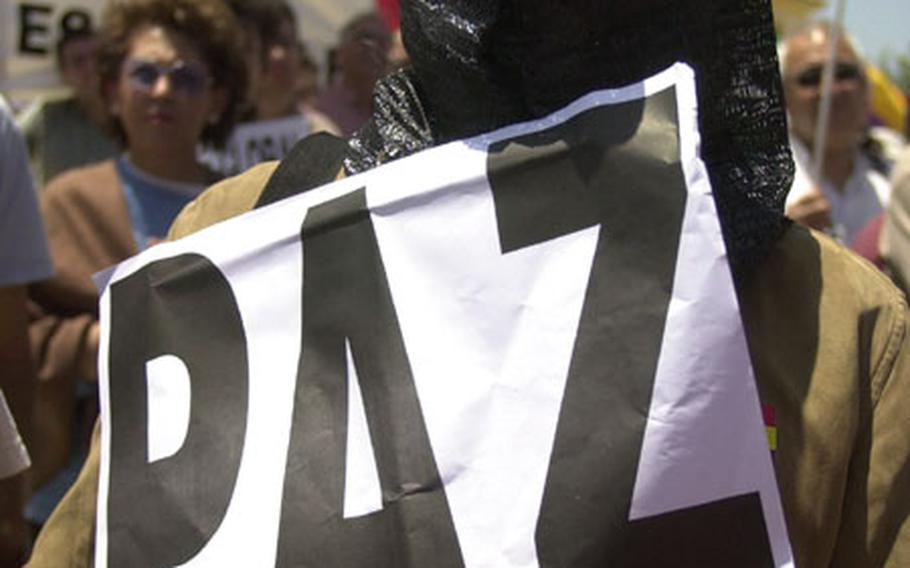 A protester on Sunday outside Naval Station Rota, Spain, holds a sign with "Paz" — the Spanish word for peace — while wearing a hood in protest of the Iraqi prisoner abuse scandal. (Scott Schonauer / S&S)

A protester on Sunday outside Naval Station Rota, Spain, holds a sign with "Paz" — the Spanish word for peace — while wearing a hood in protest of the Iraqi prisoner abuse scandal. (Scott Schonauer / S&S) 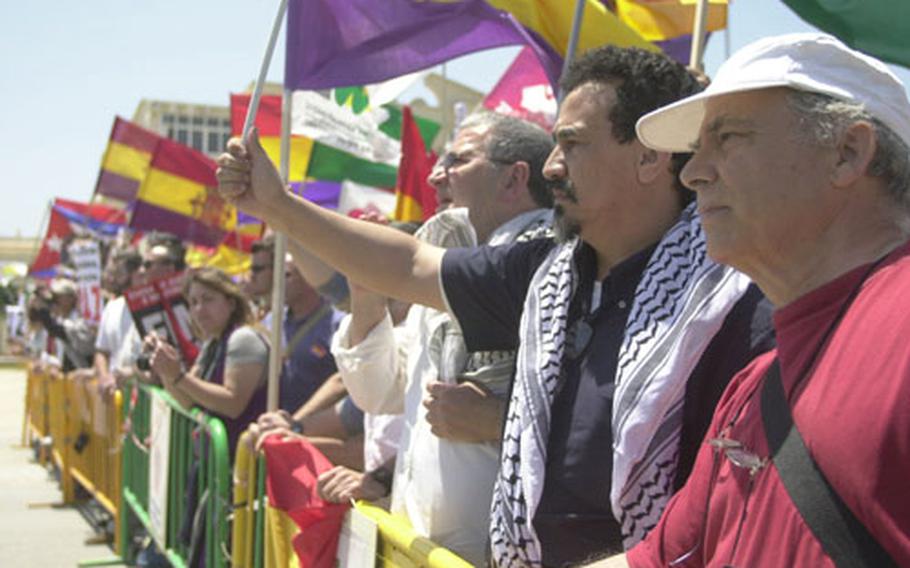 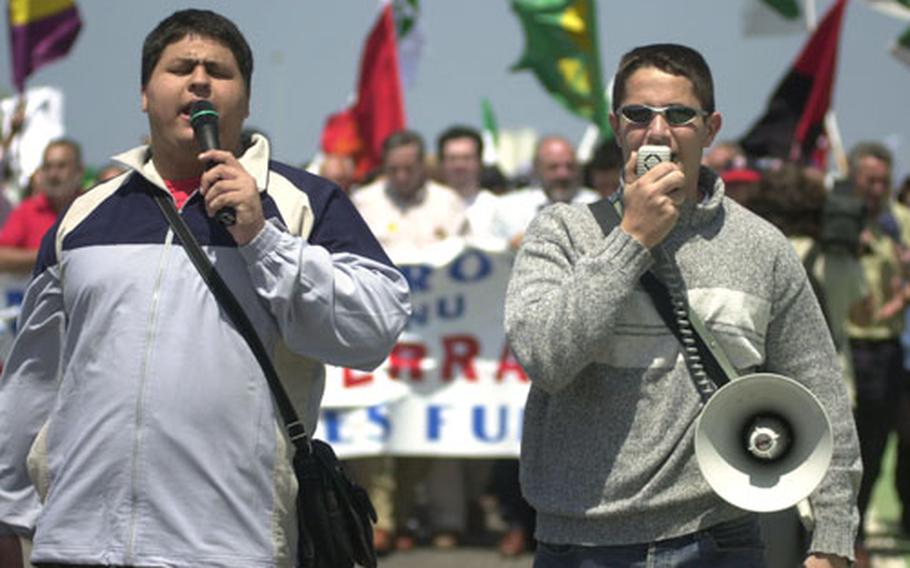 A pair of protesters leads the crowd in a series of chants on Sunday outside Naval Station Rota, Spain. (Scott Schonauer / S&S) 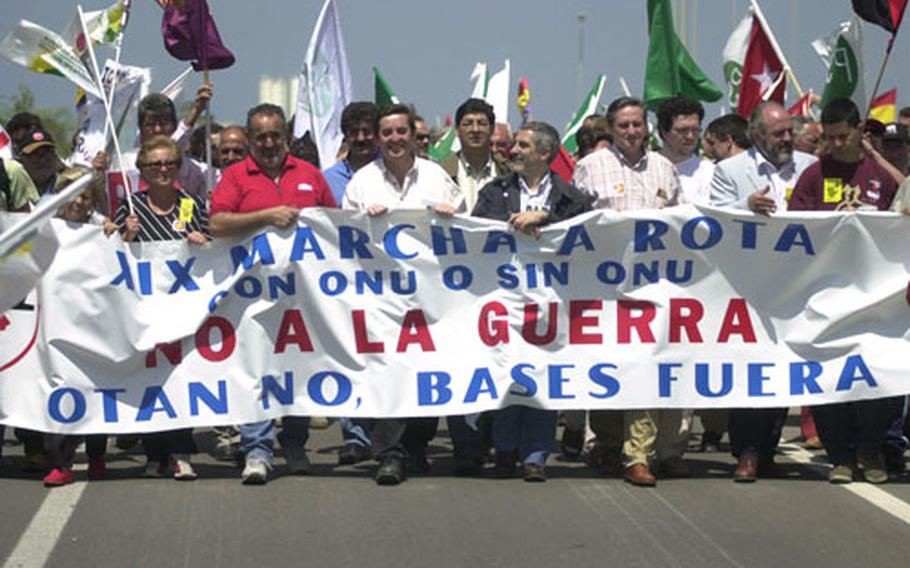 Hundreds of protesters from Spain, Morocco and Portugal march Sunday toward the main gate of Naval Station Rota, Spain. Demonstrators protested the Iraq war and the stationing of U.S. forces in the Iberian Peninsula. (Scott Schonauer / S&S)

ROTA, Spain &#8212; Carrying anti-war and anti-U.S. signs, hundreds of chanting demonstrators marched to the gate of Rota&#8217;s military base Sunday protesting the Iraq war and American military bases in Europe.

Protesters from Spain, Portugal and Morocco marched from Rota&#8217;s cemetery to the main gate of Naval Station Rota, a Spanish base where about 3,000 U.S. service members are permanently stationed.

&#8220;The total occupation of Iraq and in Afghanistan is totally incorrect,&#8221; said Ignacio Ferrer Ivila, a 23-year-old literature and Catalan language student who lives in Algeciras. &#8220;It&#8217;s a complete tragedy and we think it should stop.&#8221;

For nearly two decades, socialists, college students and environmentalists have demonstrated against NATO and U.S. forces stationed at bases on the Iberian Peninsula in what is called the annual &#8220;Marcha a Rota.&#8221; This year, however, much of what the protesters focused on were the war and the Iraqi prisoner abuse by American troops.

Poster-size photos of U.S. soldiers abusing and humiliating Iraqi prisoners at Abu Ghraib prison near Baghdad hung around a stage only 40 yards away from the Navy base&#8217;s gate. Some demonstrators donned black hoods, similar to those worn by detainees at the prison.

The 2&#189;-mile march from the cemetery to a dusty, sand parking lot included people of all ages waving flags and chanting. A mother with a sign saying paz, Spanish for &#8220;peace,&#8221; pushed a stroller with her daughter inside. One man wore a T-shirt with a picture of the late Marxist Soviet Union leader Vladimir Lenin.

But the occupation of Iraq is dividing the United States from the rest of the world, she said.

The majority of the demonstrators came from outside the area, riding to Rota in tour buses from Portugal and Spain. Some protesters spouted out strings of expletives directed at the base, but the demonstration remained peaceful.

There were no arrests.

Spanish police with batons stood behind a fence, but the crowd never got close to the officers. Patrolmen on horses also stood near the base&#8217;s gate. Inside the base, security personnel monitored the protest from a crane.

The base closed the gate and the back nine to the golf course, which runs near the perimeter of the base and within sight of the marchers. All traffic was diverted to another gate and the base radio warned Americans to avoid the area.

The gate, however, reopened shortly after protesters began to leave the area around 3 p.m.

The U.S. military has stationed personnel at bases in Rota and Mor&#243;n de la Frontera for more than 50 years. Naval Station Rota is a major hub for ships and planes carrying troops and cargo.