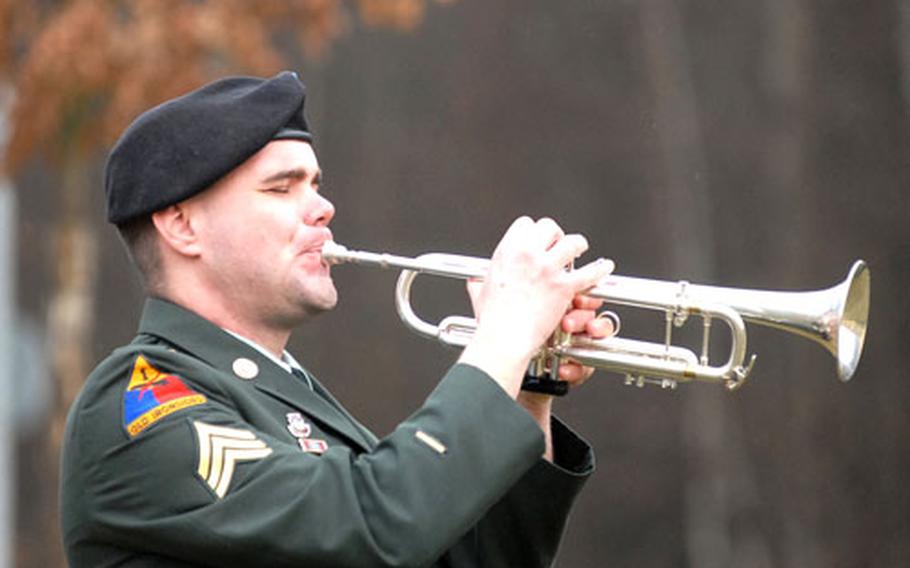 VILSECK, Germany &#8212; Their families and most of their friends were thousands of miles away, but hundreds of comrades packed Vilseck Chapel on Wednesday for a ceremony to honor six 3rd Squadron, 2nd Cavalry (Stryker) Regiment soldiers killed in a booby-trapped house in Iraq last week.

Second Cav Rear Detachment commander Lt. Col. Tom Rickard told those assembled that the soldiers were victims of a desperate act by a retreating enemy blowing up its own safe houses.

&#8220;The brave men we honor today will be forever remembered for their accomplishments. Iraqis will tell this story to generations. Foreigners who removed a dictator &#8230; Americans who never quit month after month &#8230; never claimed Iraqi soil for their own &#8230; and stood shoulder to shoulder with their Iraqi brothers in arms,&#8221; he said.

&#8220;These scouts were among the best the Army had to offer. They continued to fight this cowardly enemy even after seeing other Wolfpack brothers fall,&#8221; he said.

Dykema described Pionk as a leader who worked well with soldiers and who was able to fix a bad situation.

Gaul wanted nothing more than to lead at the tip of the spear, said Dykema.

Dozier was a quiet professional and a patriot, he said.

&#8220;He loved the outdoors and his father. He knew his role as a sniper well and always had time to share his knowledge with soldiers,&#8221; he said.

&#8220;He liked to study the history and theory of war. He was a gun enthusiast who loved to talk about weapons to anyone who would listen,&#8221; he said.

McBride had a GT (Army IQ test) score of 134, the highest Dykema had seen, he said.

&#8220;With his intellect he could have gotten scholarships to go anywhere, but his desire was to serve his country,&#8221; he said.

Davis was immensely strong and decisively won the squadron combatives competition, he said.

&#8220;On Jan. 9, the Army lost great warriors. I&#8217;ve not known a group of more professional soldiers than those scouts. The Wolfpack is a better organization for having you with us. We will miss you and we will remember you,&#8221; Dykema said.

Army Chaplain Glenn Woodson said the sense of loss felt by people at Vilseck was nothing compared to that suffered by the families of the six soldiers who would watch the ceremony by video.

&#8220;Today we see the ugly and inevitable reality of war. I hope the families can find some consolation that these six soldiers were the finest our country has. The cream of the crop,&#8221; Woodson said. &#8220;They wanted to be and deserved to be on the tip of the Army&#8217;s spear in this war on terror,&#8221; he said.