Hundreds gather in Kaiserslautern for racism protest; service members were told to stay away 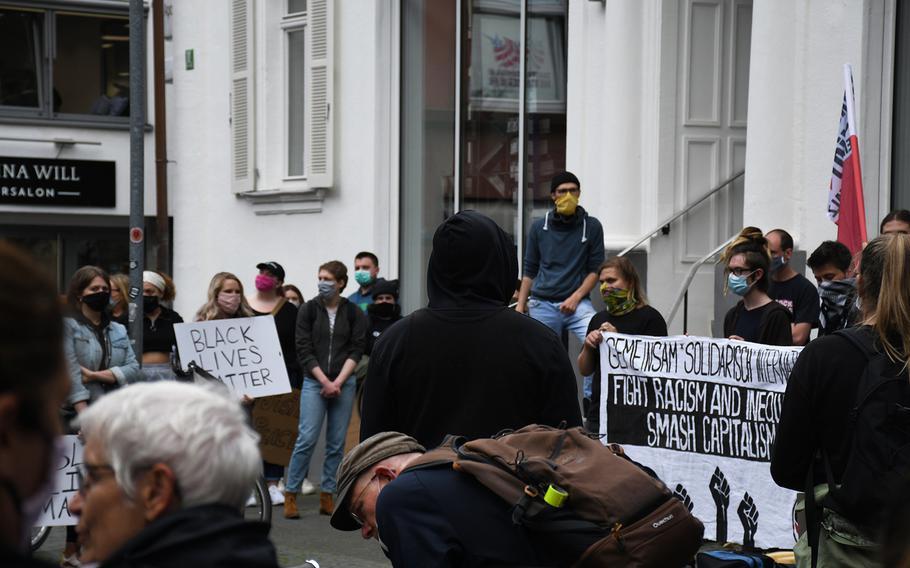 Buy Photo
Demonstrators are pictured here during a rally in downtown Kaiserslautern to oppose racism on Thursday, June 4, 2020, as a sign of solidarity with American protests in several cities spurred by police brutality. (Chad Garland/Stars and Stripes)

Buy Photo
Demonstrators are pictured here during a rally in downtown Kaiserslautern to oppose racism on Thursday, June 4, 2020, as a sign of solidarity with American protests in several cities spurred by police brutality. (Chad Garland/Stars and Stripes) 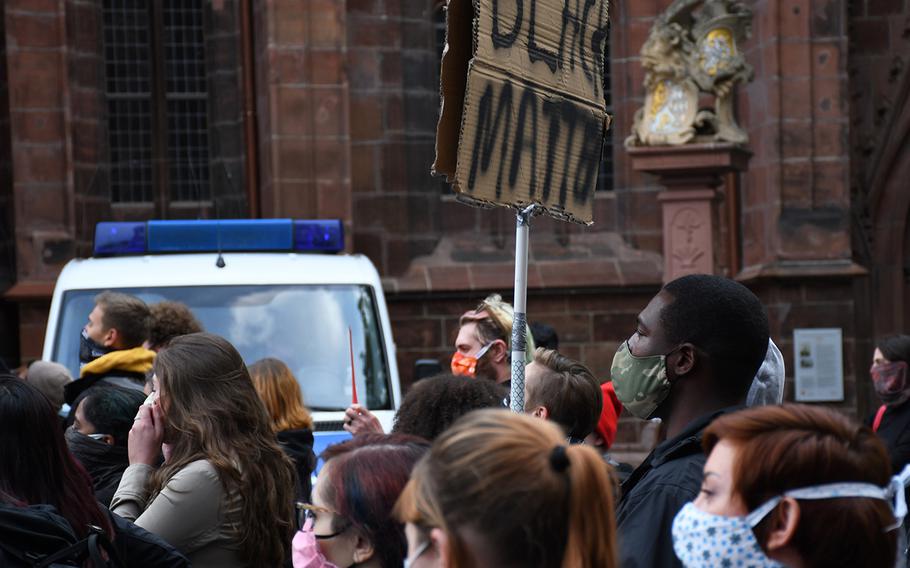 Buy Photo
A man is pictured here holding a ''black matters'' sign during an anti-racism rally in downtown Kaiserslautern on Thursday, June 4, 2020. The event was held in response to widespread U.S. protests spurred by the death of an unarmed Minnesota black man, George Floyd, while in police custody in late May. (Chad Garland/Stars and Stripes) 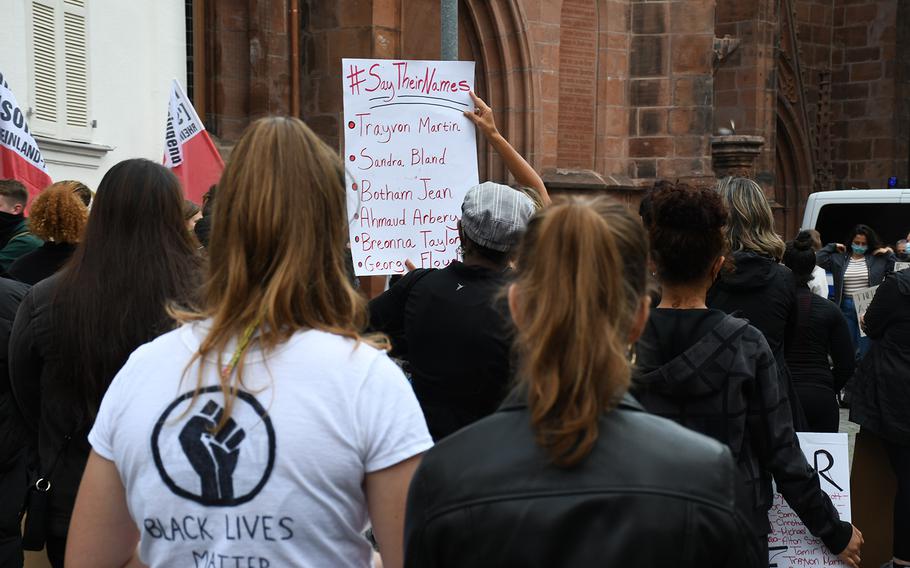 Buy Photo
Protesters gathered in Kaiserslatuern on Thursday, June 4, 2020, to rally against racism and inequality in response to widespread demonstrations in the U.S. in the wake of the killing of an unarmed Minneapolis black man, George Floyd, in late May. Four Minneapolis police officers have been charged in connection with the death. (Chad Garland/Stars and Stripes)

KAISERSLAUTERN, Germany — U.S. military personnel in Germany were warned to avoid an anti-racism demonstration that drew about 300 people by early Thursday evening in Kaiserslautern.

The rally in front of Stiftskirche downtown began with a moment of silence for George Floyd, who died May 25 after a Minneapolis police officer kneeled on his neck for nearly nine minutes.

A group held signs with slogans like “Fight racism and inequality” and “Smash capitalism,” while chanting “No justice, no peace.” Others wore signs around their necks that said “Black Lives Matter.”

But U.S. service members in the region — home to large Army and Air Force commands — were told to avoid the event, which was organized by German left wing youth organizations.

Ramstein Air Base and U.S. Army Garrison Rheinland-Pfalz both warned service members of the Defense Department policy barring their participation in demonstrations while overseas, even when off-duty and in civilian clothing.

The German state of Rheinland-Pfalz, where Kaiserslautern is located, is home to some 50,000 U.S. personnel and their families.

DOD civilian employees may attend a rally in their personal capacity, “never on duty, never expressing or implying they are speaking for DoD,” the 21st Theater Sustainment Command legal office said, according to Stefan Alford, USAG Rheinland-Pfalz spokesman.

For family members and others, rules about respecting host nation laws remain in place, he said.

A general order issued late last month related to the coronavirus pandemic would not bar Army civilian employees and families from attending the event, said Master Sgt. Dan Bailey, a 21st TSC spokesman. But they would be required to maintain physical distancing and wear face coverings in public in keeping with German measures.

Air Force civilians and family members were also discouraged from attending due to concerns over the virus.

The event began at 5:30 p.m. and was scheduled to run until 8 p.m. Participants were expected to maintain social distancing and wear masks during the demonstration, organizers said on a Facebook event page.

The demonstration was meant as a show of solidarity with the widespread protests against racism and police abuse in the United States, and as a response to racial injustices in Germany, its organizers said on Facebook. It was held by the Linksjugend ‘solid groups in Kaiserslautern and Rheinland-Pfalz, the youth organizations of the German political party The Left.

It moved ahead despite intermittent rain throughout the day.

“Even if the weather could be better, we take to the streets today to remember George Floyd and all victims of racist violence, to show solidarity with the protests in the USA and to fight against racism, oppression and exploitation here too!” Linksjugend ‘solid Kaiserslautern said on the Facebook page.