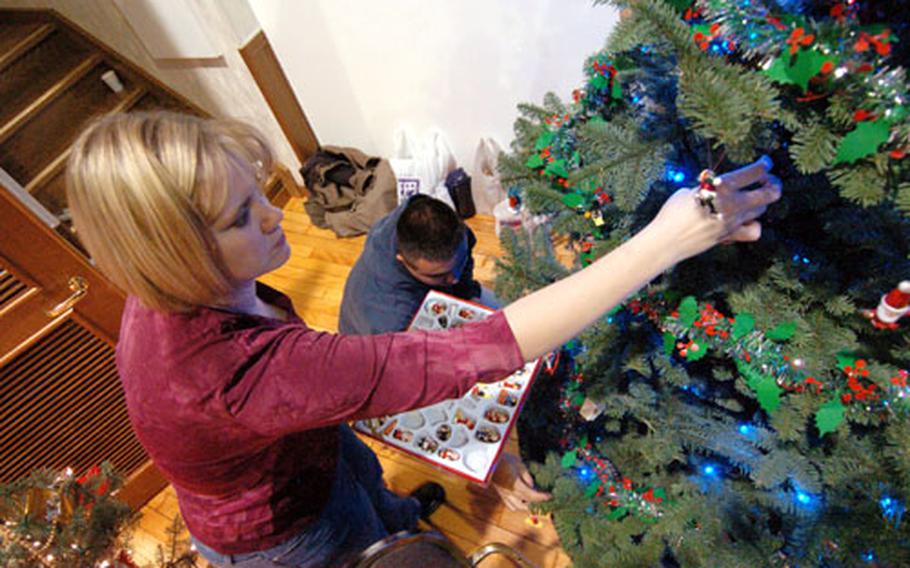 Susan Marin, wife of the USS Gary commanding officer, decorates the command’s Christmas tree at Yokosuka Naval Base, Japan. Yokosuka residents come together each year to decorate Christmas trees from each of the facility’s commands. (Jim Schulz / S&S)

Susan Marin, wife of the USS Gary commanding officer, decorates the command’s Christmas tree at Yokosuka Naval Base, Japan. Yokosuka residents come together each year to decorate Christmas trees from each of the facility’s commands. (Jim Schulz / S&S) 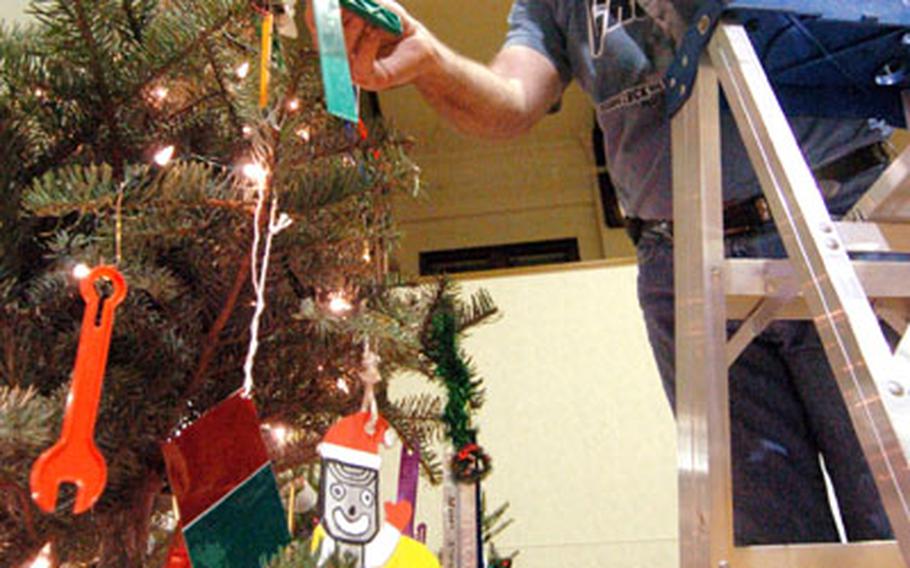 YOKOSUKA NAVAL BASE, Japan &#8212; Members of the First Class Association from the USS Gary found just the right lights to make their tree unique.

He looked off base for his decorations.

The gang from Navy Facilities Engineering Command Far East used symbols from their job &#8212; a hardhat for a tree topper, cut-out tools and yellow &#8220;caution&#8221; tape.

&#8220;It&#8217;s getting into the holiday spirit,&#8221; said Sam Roundtree, the business manager at Navfac, a new command that took over for Public Works this summer.

Carrying on a long Yokosuka tradition, a few hundred people from more than 40 commands came together Wednesday to partake in a potluck dinner and create the centerpieces for the base Festival of Trees, a community showcase that runs over the weekend.

Each command received a tree.

Some used traditional ornaments while others, like Navfac, used symbols representing what they do.

Yokosuka&#8217;s Fleet Imaging Center decked its tree with rolls of glittery film and camera-equipment boxes underneath.

The Boy Scouts had tiny Scout figurines and the Seventh Fleet incorporated flags from countries throughout the fleet&#8217;s area of operations.

The festival is a chance for the community to celebrate together &#8212; first as they decorate and then during the two-day festival, which is open to everyone.

Just hours after pulling back into port, several servicemembers from the USS Vandegrift were sprucing up their tree with decorations made by crewmembers&#8217; spouses and children.