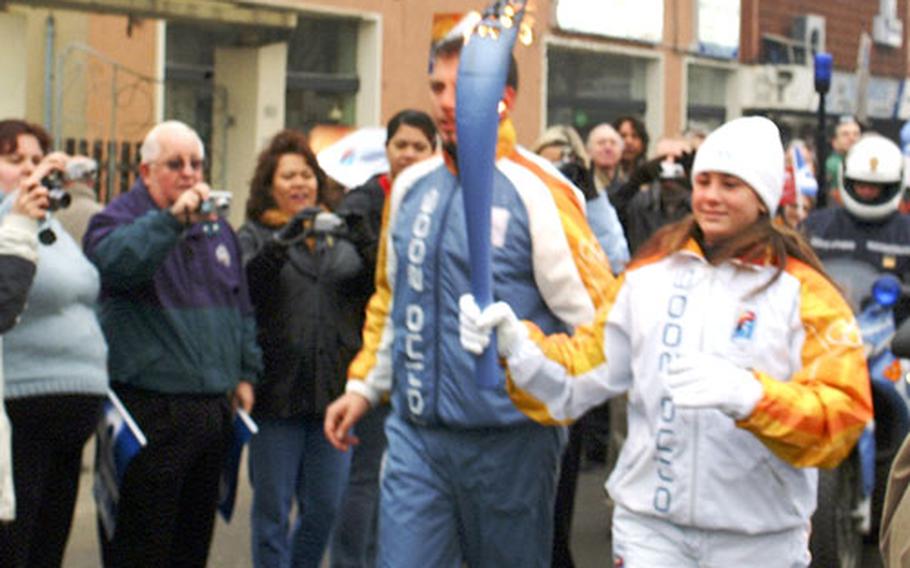 The Olympic torch passed in front of Caserma Ederle in Vicenza, Italy, on Tuesday, and hundreds of Americans got up early and braved a few snowflakes to see it pass by. Some waited for about an hour to watch the display, which ran a bit behind schedule. The torchbearer was preceded by several vehicles, including a few carrying small flags bearing the logos of sponsors Samsung and Coca-Cola. (Kent Harris / S&S)

VICENZA, Italy &#8212; The hundreds of people frantically waving small flags up in front of the gates of Caserma Ederle on Tuesday morning weren&#8217;t protesting anything.

They were just hardy enough to get up early, bundle up and watch the passing of the Olympic torch. More than a few probably wanted a chance to hold it &#8212; for warmth if nothing else.

Almost all of those who started to gather in front of the base around 8 a.m. were Americans, joined by a handful of Italians who work on base. Morale, Welfare and Recreation officials had cookies and hot drinks available just inside the gate to help stave off some of the cold.

The street on either side was largely empty and as the minutes ticked by, a few joked that they would never see the torch. One bystander said it would be a good trick to get a bunch of Americans to gather outside the base walls and stand for an hour under a few scattered snowflakes.

But the torch did indeed show up, heralded by more than a dozen cars and vans bearing the Olympic insignia. Those were followed by trucks blaring music and young people handing out small flags bearing Olympic themes and logos from corporate sponsors Samsung and Coca-Cola.

So, by the time the torch came by a few minutes later, many in the crowd had something to wave.

Sixth-grade pupils from the elementary school on base and some high school students were among those looking on.

Ashley Potts, another pupil, said she wouldn&#8217;t mind competing in the Olympics some day. She admitted to being cold, though, and her sport of choice &#8212; equestrian &#8212; is part of the Summer Olympics.

Hefferman said the whole school was excited about the torch relay, but logistics and safety issues kept more pupils from attending.

&#8220;We were a little concerned bringing the little kids out here because of the traffic,&#8221; she said.

In fact, car after car continued along the busy street right up until the torch procession made its way along. And traffic quickly resumed after the torch passed and the Americans lined up again to pass through the gate and get warm.