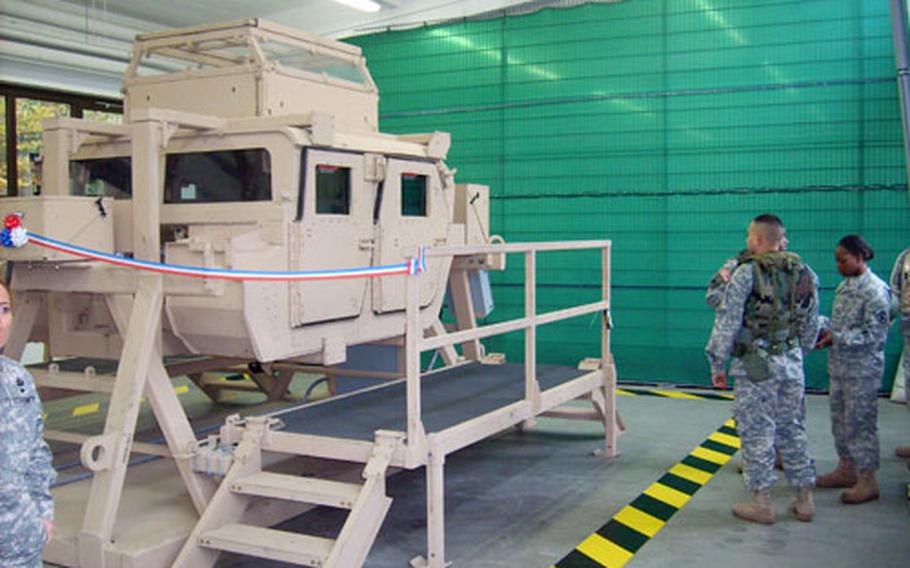 Members of the 5th Quarter Master Company of the 39th Transportation Battalion stand by the Humvee Egress Assistance Trainer at Panzer Kaserne in Kaiserslautern, Germany. The soldiers demonstrated how the trainer is used to properly escape an overturned Humvee. (Chris Miles / S&S)

Members of the 5th Quarter Master Company of the 39th Transportation Battalion stand by the Humvee Egress Assistance Trainer at Panzer Kaserne in Kaiserslautern, Germany. The soldiers demonstrated how the trainer is used to properly escape an overturned Humvee. (Chris Miles / S&S) 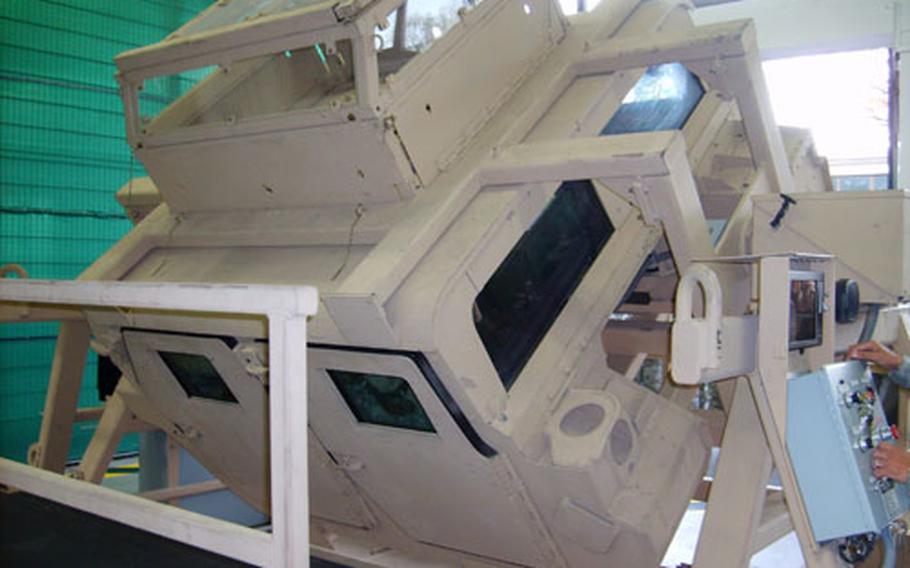 The Humvee Egress Assistance Trainer turns on its “tipping point” to demonstrate a Humvee rollover accident. The trainer will be used by soldiers in the Kaiserslautern area to practice escaping from such accidents. (Chris Miles / S&S)

During the past week, Lt. Col. Bob Curran of the 39th Transportation Battalion received a handful of e-mails telling him of more soldiers whose lives were lost.

The soldiers hadn&#8217;t died as a result of gunfire or attack, he said. Instead, the e-mails reported that the deaths had occurred in Humvee accidents.

Curran spoke about the accidents Tuesday during the opening of Kaiserslautern&#8217;s Humvee Egress Assistance Trainer, or HEAT, a machine that simulates a Humvee rollover and helps soldiers practice escaping safely.

According to The Associated Press, the most recent Humvee-related death occurred in Afghanistan on Oct. 23 when a soldier&#8217;s Humvee flipped over.

The HEAT stationary vehicle is shaped like the M1114 up-armored Humvee, but with a cylinder going through its frame that allows it to be flipped from side to side and upside down.

&#8220;This helps with soldier&#8217;s muscle memory, so they know how to react if the vehicle rolls over,&#8221; said Anthony Moore, chief of the Kaiserslautern Training Support Center of the 7th U.S. Army Multinational Training Command. &#8220;If you turn over enough times you know what to do if the vehicle flips.&#8221;

The HEAT weighs 13,200 pounds, and has a gun turret and armor similar to its real-life counterpart. Up to five soldiers can participate in HEAT training exercises at a time.

The Kaiserslautern model cost $250,000, Moore said, and was designed by the Army two years ago when they saw that troop deaths as a result of Humvee accident was a growing problem.

&#8220;This helps build confidence up when a soldier gets in a chaotic situation and lets them know what to do and not panic,&#8221; said Hershel Lester, a training resource specialist at the center.

There are a number of HEATs throughout Germany, including Ansbach, Baumholder and Grafenw&#246;hr. Kaiserslautern&#8217;s HEAT will be open to units around the area, with those heading downrange receiving priority. Moore said a typical training exercise in the vehicle lasts 30 minutes.