Humvee team trucking all around Afghanistan 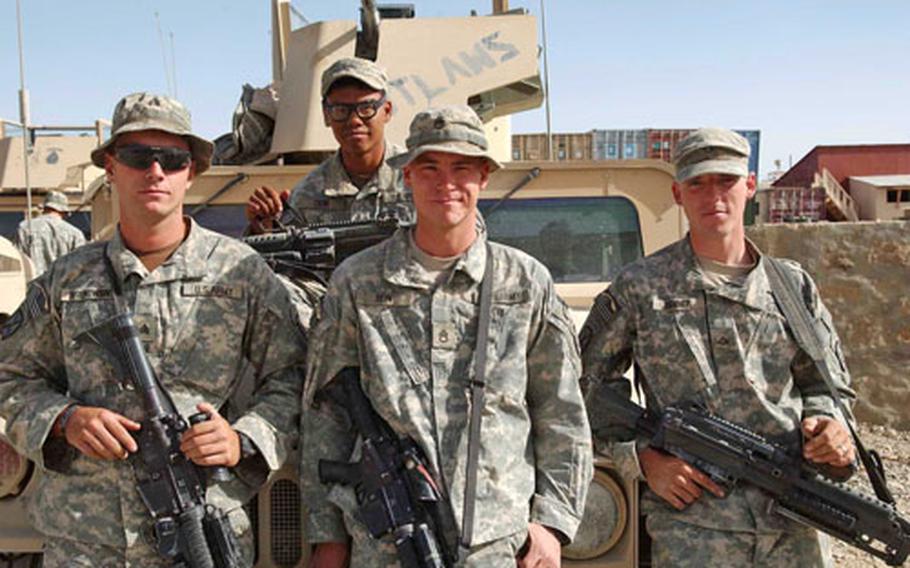 ORGUN, Afghanistan &#8212; It wasn&#8217;t even their Humvee, it had nearly 11,000 miles on it, and here it was, part of a convoy, getting ready to cross miles and miles of bleak, rocky terrain surrounded by hills and scrub where men with rifles and RPGs might be hiding.

They were not happy soldiers.

Four days before, they&#8217;d been ambushed. Two guys were shot in the elbow; another was hit in the foot. And now they had this new mission to fight someplace else. The bright spot: the Humvee&#8217;s discreet convoy position.

The convoy was supposed to take about 90 minutes. Rein and the three other soldiers in the truck, all from the seemingly indefatigable Company C, 2nd Battalion, 87th Infantry Regiment, knew it would take longer. Someone&#8217;s Humvee, possibly theirs, would surely break down.

Nine minutes after rolling out the gate, it happened. A bolt broke in the Humvee in front of theirs, and all steering capability was gone.

Omen or not, the convoy continued. Only now the broken Humvee had to be towed by Renner&#8217;s Humvee.

And then, unexpectedly, things started looking up. Someone else towed the broken Humvee. The convoy proceeded, and, without the other Humvee attached, the ride seemed quite smooth. Plus, as Rein noted, &#8220;The AC works very well.&#8221;

As the convoy drove on, Rein talked about what he did on leave: He won money playing poker and roulette, he played ball with his kids, he told his girlfriend he could not sleep past noon, even if she could.

Rein told the gunner, Pvt. Vandy Thon, to be alert, after hearing on his radio that mirror flashes had been seen, indicating that someone was signaling their progress to someone else. &#8220;I don&#8217;t know &#8230; two flashes per vehicle?&#8221; Rein said.

Company C&#8217;s 3rd Platoon members have been unbelievably busy since arriving in the remote Paktika province in February. Their base is nothing to write home about, but because they&#8217;ve usually been hundreds of miles away from its gym, communications and hot meals, it seemed almost beautiful.

In six months, the platoon had been attached to the Marines, NATO forces, the British, the 1st Battalion, 32nd Infantry Regiment, the 3rd Battalion, 71st Cavalry and Special Forces.

All their missions have been combat operations. All involved shots being fired, including one ambush that lasted 30 minutes, Rein said. During that one, they were in their Humvees and just kept driving.

Of their platoon of 36 men, 17 have been injured and awarded Purple Hearts, Rein said.

Rein is scheduled to leave Afghanistan this winter. He says he&#8217;ll never come back, even if the country is transformed into a garden spot, even if the Army wants him to come back. He&#8217;s seen enough combat, he says, and he&#8217;s been far from home a long time.