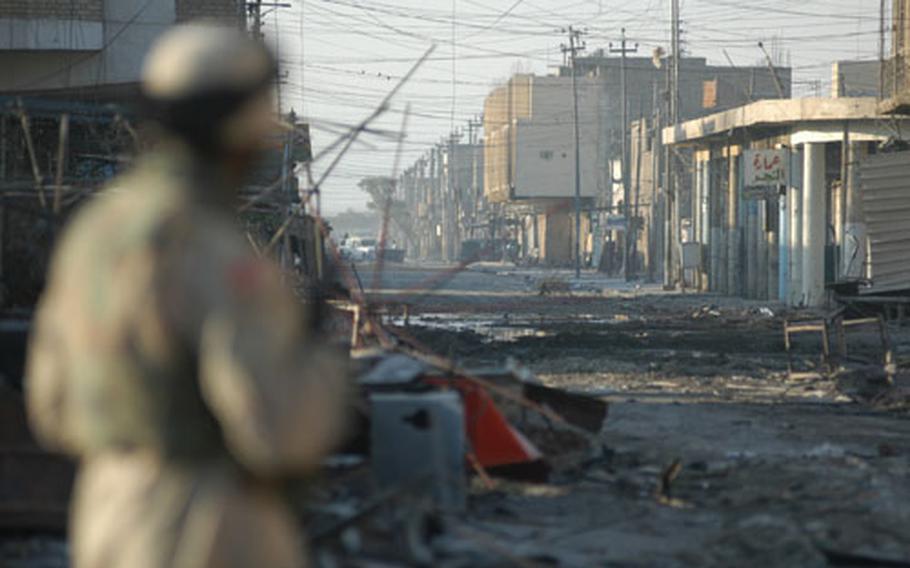 A soldier looks down a Najaf street through a thick web of electrical wires. The wires are a threat to Humvee gunners, as is rebar sticking out from damaged buildings or those which had been under construction before the fighting started. Rebar has also lodged in the tracks of tanks and Bradleys during fights. (Jason Chudy / S&S)

A soldier looks down a Najaf street through a thick web of electrical wires. The wires are a threat to Humvee gunners, as is rebar sticking out from damaged buildings or those which had been under construction before the fighting started. Rebar has also lodged in the tracks of tanks and Bradleys during fights. (Jason Chudy / S&S) A soldier pulls electrical wire from the front of a Humvee after a mission in Najaf. Wire can hurt or kill gunners and wraps around the weaponry or some of the larger armored vehicles. (Jason Chudy / S&S)

NAJAF, Iraq &#8212; Ask Humvee gunner Spc. Tim Collins of the 3rd Battalion, 153rd Infantry Regiment of the Arkansas National Guard about what worried him most about fighting in Najaf, and the answer is surprising.

It wasn&#8217;t enemy fire, but rather low-hanging electrical wires and steel rebar.

Their platoon was attached to Company C before the Najaf fight.

The soldier Collins referred to received cuts and bruises to his chin from either low-hanging wire or a piece of rebar that had flown up from the street.

Many of the power lines that run throughout the old section of town, where all the fighting took place, hang low above the street, having been strung by residents tapping into the main lines.

When 2-7 Cav arrived in Najaf, hundreds of wires hung along the length of every street, like giant black spider webs.

Realizing the danger, soldiers took steps to minimize it.

&#8220;We sent the tanks through first,&#8221; said Capt. Peter Glass, commander of Company C, 3rd Battalion, 8th Cavalry Regiment. His unit was attached to 2-7 Cav for the Najaf fighting.

Even after dozens of runs down Najaf&#8217;s streets by dozens of vehicles, dangling wires remained a problem. Gunfire would cause a new batch of broken wires, which would drop straight down or loop down across the street.

Drivers, Collins said, needed to be an extra set of eyes for the gunner to warn him of the danger.

The placement of the turret, which is determined by the vehicle&#8217;s position in the group or by enemy action, may put them at a disadvantage for the wires.

Whether day or night, whenever the gunner is facing backward on an armored Humvee, he can&#8217;t see anything coming at him. A metal shield protects the soldier&#8217;s back from fire or wire, but even if the shield catches the wire there&#8217;s a possibility of injury.

Rebar, Collins worried, would do worse than leave a welt.

&#8220;A lot of the buildings that were blown up have rebar hanging down or sticking out from the concrete,&#8221; Specking said.

Piles of the inch-thick rebar also sat on the ground, waiting to be pulled into the tracks of a passing tank or Bradley fighting vehicle. This sometimes puts the Bradleys out of action for a while.