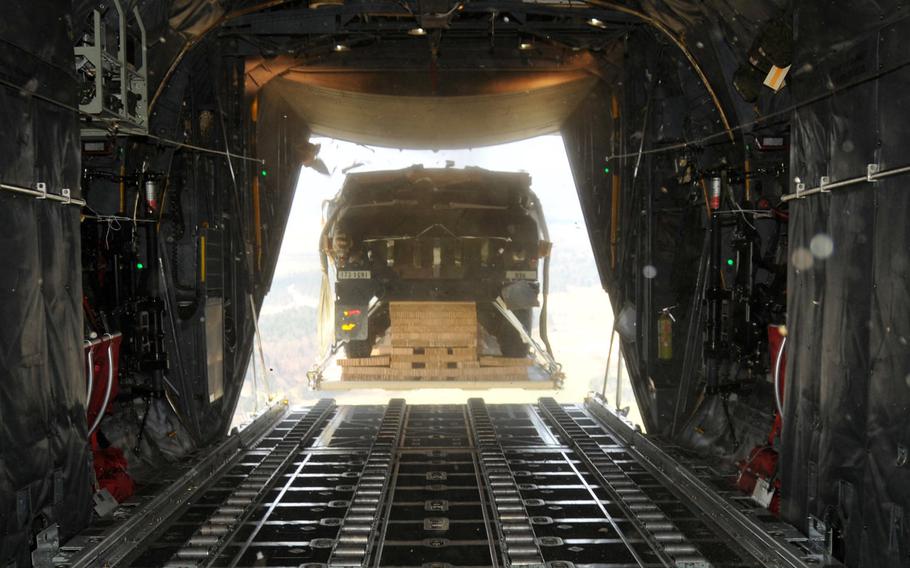 A Humvee is air dropped out of a C-130 Hercules over Hohenfels Training Area, Germany, April 11, 2016. A sergeant with the 173rd Airborne Brigade has been charged in connection with the destruction of three Humvees that plummeted to the ground that day. (Andrew J. Park/U.S. Air Force)

VICENZA, Italy — The 173rd Airborne Brigade soldier charged in connection with the spectacular destruction last year of three Humvees that slipped free from their parachutes during a drop and plummeted to earth is not a parachute rigger. He is a Germany-based scout who’d been assigned to assist the brigade’s Italy-based parachute riggers during the exercise, authorities said.

Already punished in connection with the incident is a soldier who was heard laughing and cursing as he shot video of the falling Humvees on April 11, 2016, at the Hohenfels training area. He has been reprimanded, Christian Marquardt, a 7th Army Training Command spokesman, said Thursday.

More serious consequences face Sgt. John Skipper, a scout with the Germany-based 1st Squadron, 91st Cavalry Regiment (Airborne). Skipper, who had been detailed to assist the 173rd’s 601st Quartermaster Company, based at Aviano Air Base, was charged in May with several counts of destruction of government property and making a false official statement.

The charge of destruction of government property falls under Article 108 of the Uniform Code of Military Justice, which prohibits damage, destruction, or loss, either “willfully caused by the accused” or as a result of negligence. The maximum punishments for each vary considerably. Destroying property valued at more than $500 through neglect carries a maximum punishment of a year in prison, a bad-conduct discharge and forfeiture of all pay and allowances.

Willful destruction carries a maximum penalty of 10 years in prison, a dishonorable discharge and forfeiture of all pay and allowances.

Marquardt declined to say whether the government was alleging Skipper had acted willfully or negligently.

A video of the incident has been viewed more than a million times on YouTube.

The soldier who made the video is a sergeant assigned to the the 7th ATC’s Joint Multinational Readiness Center as an “observer trainer coach.” His administrative letter of reprimand came from the JMRC commander, Marquardt said.

“The reprimand addressed the unprofessional comments the soldier made during the video, and the fact that he shared the video with others, which resulted in it being posted to social media by an unknown individual,” Marquardt said in an email.