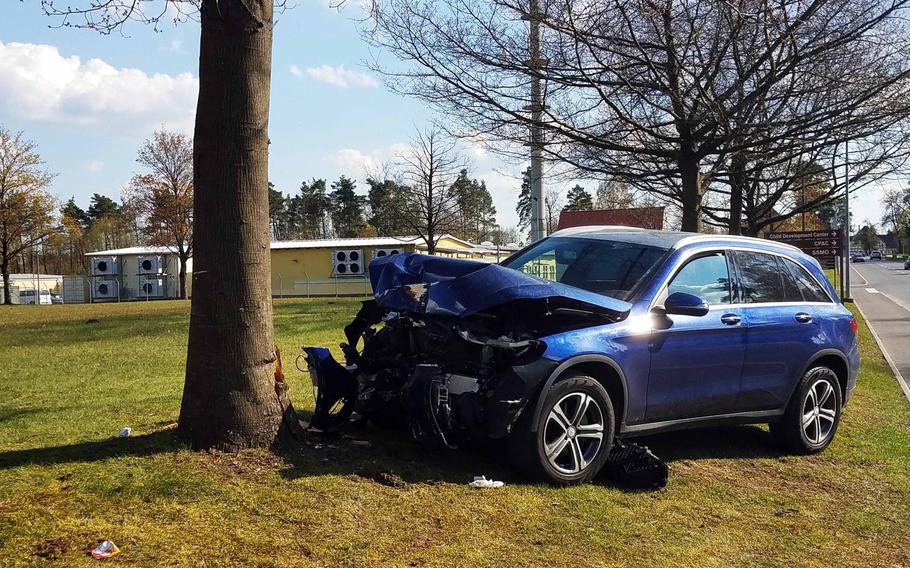 The wrecked car of a U.S. soldier who fled from the police on base and crashed into a tree, Tuesday, April 17, at Grafenwoehr, Germany. (Martin Egnash/Stars and Stripes)

GRAFENWOEHR, Germany — A soldier nearly crashed a Humvee into a river, another soldier led police on a chase before crashing into a tree, and a third soldier was seriously injured in a collision in three separate traffic incidents in Bavaria on Tuesday.

At around 10 a.m., a 20-year-old U.S. soldier stationed at Grafenwoehr lost control of his Humvee while driving about 30 miles south of the Army’s Rose Barracks in Vilseck, near the town of Ensdorf.

The Humvee skidded across the opposite lane on country road 2165, Amberg police spokesman Achim Kuchenbecker said.

When the driver attempted to re-enter the right lane, the Humvee plowed through the guard rail backwards and stopped just short of the Vils River.

The soldier driving sustained minor injuries to his leg, police said. Another soldier in the Humvee was unharmed, police said. The road had to be closed until about 2 p.m.

The total damage to the vehicle and guardrail came to about $12,500, police said.

German and military police were called to the accident scene.

Police did not identify the soldiers involved in the accident.

Meanwhile, a U.S. soldier crashed his vehicle into a tree at the Army’s Tower Barracks in Grafenwoehr on Tuesday afternoon, after fleeing from the military police.

The soldier lost control while driving in a vehicle with no license plates.

The soldier initially failed to stop for police, Army spokesman Nathan Van Schaik said. When the soldier drove away, police raised the gate barricades to prevent him from leaving the base and to protect the outside area from reckless driving, Van Schaik said.

Workers at a nearby office told Stars and Stripes that they felt the impact of the crash from inside their building almost 100 feet away.

The driver sustained injuries and was brought to a local hospital. He is currently in stable condition.

At around 7:40 a.m., a soldier stationed at Hohenfels got into a head-on collision and sustained serious injuries while driving in Lauterhofen, about 18 miles north of the Hohenfels. The soldier was airlifted to a hospital in Nuremberg, where his condition is stabilizing.

“Safety of our personnel is our biggest concern,” Van Schaik said.

The accidents are currently under investigation.