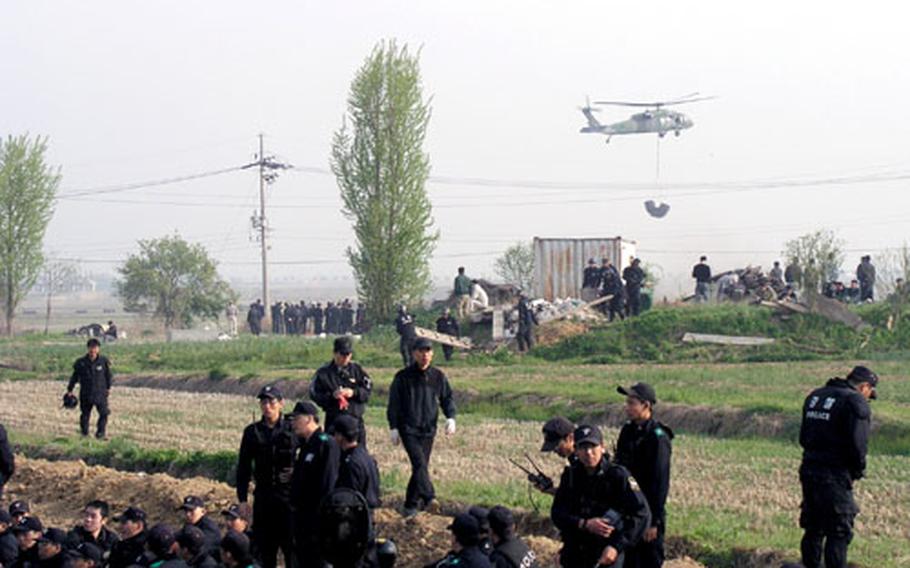 And the defense ministry will equip unarmed soldiers in the area with helmets, batons and shields after about 30 soldiers were injured last Friday when protesters set upon them with bamboo rods and metal pipes, officials said Monday.

South Korean authorities on Thursday designated a 2,328-acre tract of rice-farming land near Camp Humphreys in Pyeongtaek as a military zone. The land is slated for the eventual expansion of the post, which will triple in size under a United States-South Korean agreement.

South Korean soldiers the same day erected a barrier of concertina razor wire on an 18-mile portion of the zone near Camp Humphreys.

The action came during a massive government security operation that saw the deployment of thousands of riot police and unarmed soldiers to Pyeongtaek against protesters opposing the Humphreys expansion project.

&#8220;Even civilians can be court-martialed and face a prison term of more than two years if they are found to have damaged or harmed railroads, wire cable or other facilities used for military purposes,&#8221; the Yonhap news agency quoted Maj. Gen. Park Gyeong-seo as saying Monday.

The village was the scene of fierce close-quarters clashes between protesters and government security forces last Thursday and Friday.

Thousands of riot police stormed the Daechu-ri Elementary School on Thursday and ousted activists who&#8217;d been using it as a base for opposition to the Humphreys expansion and the U.S. military presence in South Korea.

Once police cleared the school of protesters, work crews tore down the two-story building. About 100 protesters and 110 police officers were injured during the operation.

The next day, activists wielding bamboo shafts and metal pipes attacked unarmed troops at the site. Some cut the wire in several places. About 30 soldiers were injured, authorities said Monday.

The government bused thousands of police reinforcements to Daechu-ri on Saturday.

Over both days of clashes, police arrested 624 protesters but released most after 48 hours. As of Monday, 10 were still in custody, police said.

Some 3,000 soldiers remain in the area along with several thousand police. About 600 of the soldiers are engineer troops, Yonhap said.

Bus service between Camp Humphreys and Osan Air Base, which was shut down both days, has resumed. And post officials lifted a restriction that only military vehicles on &#8220;essential&#8221; business could leave post, Barkley said.