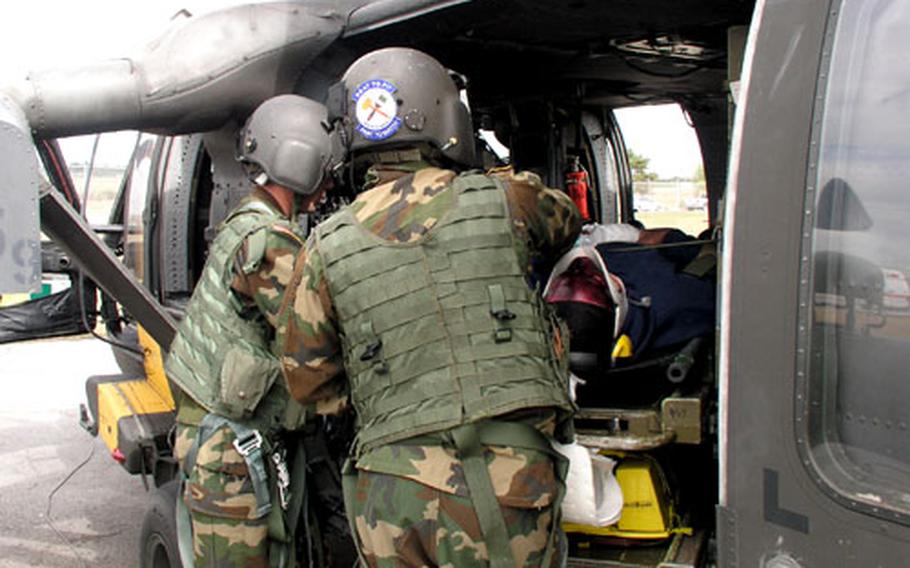 The crew of an Army medical evacuation helicopter prepares to rush a mock-casualty to an area hospital, during an anti-terrorism exercise at Camp Humphreys in South Korea on Monday. (Franklin Fisher / S&S)

The crew of an Army medical evacuation helicopter prepares to rush a mock-casualty to an area hospital, during an anti-terrorism exercise at Camp Humphreys in South Korea on Monday. (Franklin Fisher / S&S) 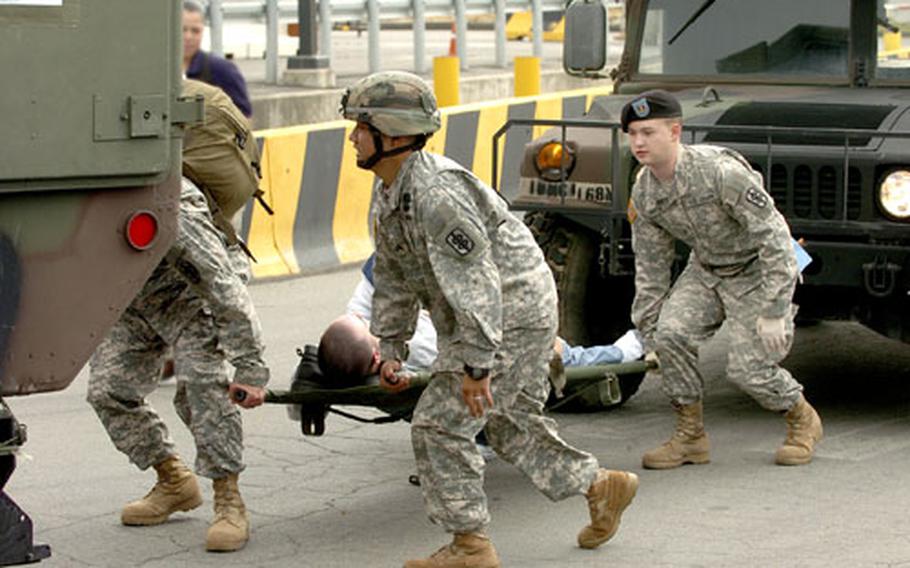 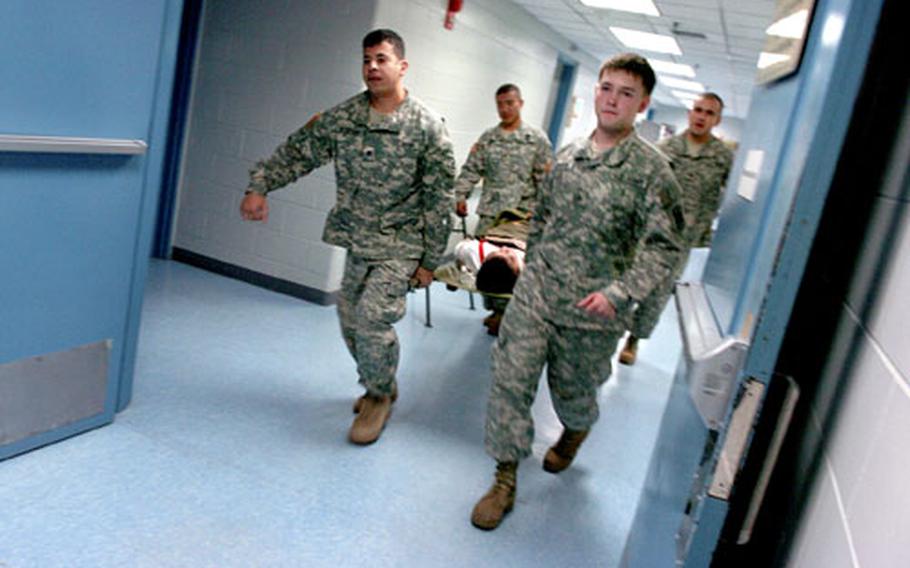 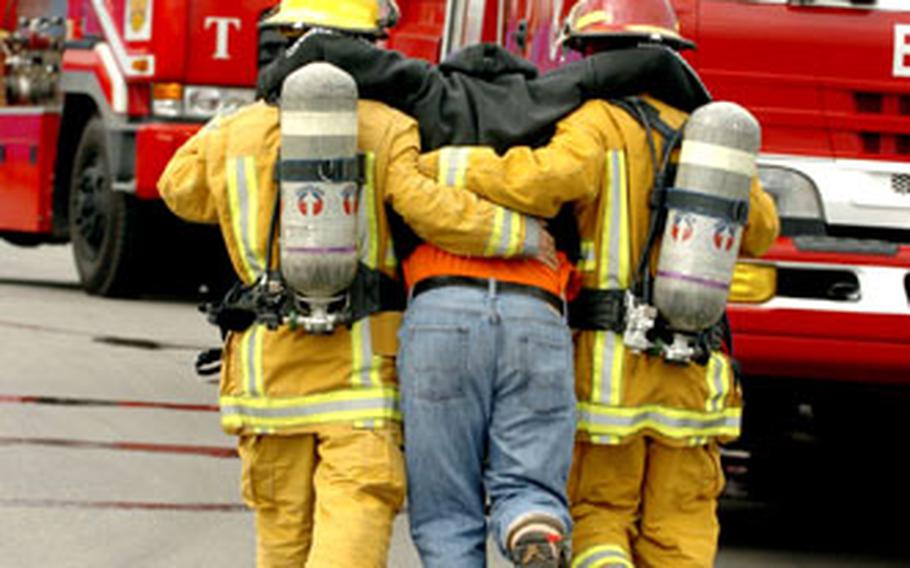 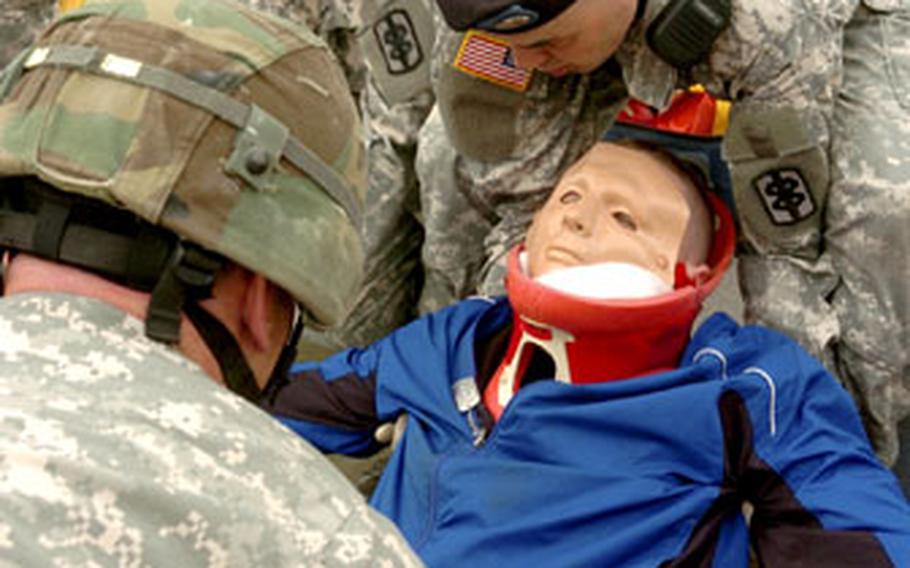 The one-day anti-terrorism exercise engaged a range of military and civilian personnel &#8212; military police, firefighters, medics, criminal investigators and a host of others &#8212; in taking the same actions they&#8217;d be required to take if the incident were real, said Army Col. Michael J. Taliento Jr., Area III Support Activity commander at Camp Humphreys.

South Korean military and police personnel also took part in the exercise, as did an area hospital.

&#8220;There was plenty of exercise stress and anxiety suffered&#8221; because of the multiple agencies responding to the incident, Taliento said. &#8220;So it provided an excellent training platform &#8230; that forced realistic responses to those tasked to respond to these particular incidents.&#8221;

No sound effects or smoke were used in the mock blast.

Instead, exercise officials approached personnel on duty near the building and handed them preprinted cards telling them what role they were to immediately begin play-acting as part of the exercise.

The scenario called for eight injured victims, four of them in critical condition.

At the same time, exercise officials used the post&#8217;s mass-notification systems to mobilize an emergency response that included police, fire and other vehicles making their way to the scene.

Two ambulances took most mock casualties to the post medical clinic. One was taken to the on-post Desiderio Army Airfield and put aboard a medical evacuation helicopter. It flew him to DanKook University Hospital in downtown Chonan.

Although the scenario stopped short of having the helicopter actually land, the hospital had an ambulance standing by as its part in the exercise, said Area III spokeswoman Susan Barkley.

Some roads were closed, and traffic was rerouted in places. Installation gates were closed for a time and there were some traffic delays, Taliento said, &#8220;but probably less disruption than people expected.&#8221;

After ending the exercise at 4 p.m., Camp Humphreys officials held an after-action review attended by those who&#8217;d taken part in the day&#8217;s events. The session included comments from a team of U.S. Forces Korea observer-controllers.

One key benefit of the exercise was that it helped give important training to recently arrived personnel, Taliento said.