Humphreys makes point to save trees 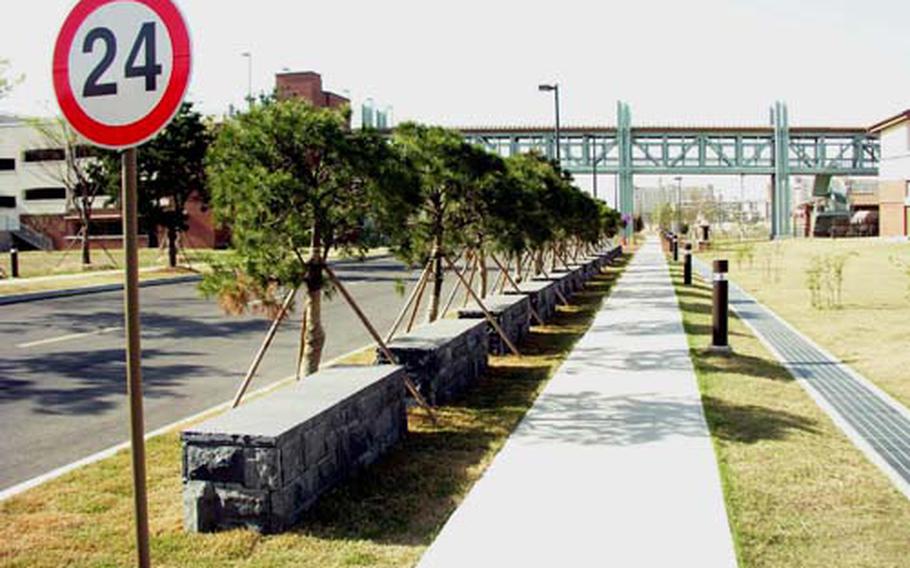 A row of 12 recently planted young pine trees lines a street near the post’s Super Gym, part of an official effort to plant new trees and save as many existing ones as the post is gradually expanded to become the U.S. military’s chief installation on the peninsula. (Franklin Fisher / S&S)

CAMP HUMPHREYS, South Korea &#8212; Officials involved in turning Camp Humphreys into the U.S. military&#8217;s installation of the future in South Korea say they&#8217;re also working to give the post&#8217;s pines, poplars and other flora a future, too.

Rather than cut down trees to make room for new construction, they&#8217;re finding ways to replant trees elsewhere on post. They plan to plant thousands of new ones, too.

The 1,200-acre post, in Pyeongtaek, is tripling in size to become the U.S. military&#8217;s flagship installation in South Korea in coming years.

Some old buildings &#8212; and in some cases, nearby trees &#8212; have to be cleared to make room for such new structures as offices, hospitals, hangars, housing and barracks.

But post officials said they don&#8217;t want to simply get rid of the trees, which are important for air quality and other environmental reasons and for their aesthetic value.

Moreover, the fate of the trees is important in a South Korea that is increasingly focused on &#8212; and watchful of &#8212; its natural environment.

And Humphreys has thousands of them, including zelkovas, which can live for about 1,000 years, said So Chong-haan, road and land management chief for the garrison&#8217;s public works department. The post also is home to acacias, magnolias, maples, poplars, pines, ginkgos and cherry trees, he said, plus juniper and azalea bushes.

Along with transplanting as many trees as possible, workers are planting new ones, which they buy from local tree farms. They recently planted 38 new trees, officials said.

By the time the Humphreys expansion is completed, garrison officials expect to plant a few thousand new trees inside the existing Camp Humphreys and on the vast piece of land onto which the post is being expanded.

"We&#8217;re doing everything we can just to save our trees," Tichota said.

Once managers know that one or more trees need to be removed to make room for new construction, they look for a spot elsewhere on the installation where they can replant them.

Construction workers have demolished about 15 buildings, and 180 more are slated to come down, Tichota said. He said about 65 trees have had to be removed, and about 50 of those were replanted &#8212; some near the commissary and others at the Super Gym and MP Hill gym.

Some trees are too old or too big to survive replanting, officials said.

Officials think perhaps 600 more may have to be uprooted before the expansion work is over.

They don&#8217;t want to move a tree to a spot near a building that will end up being torn down, he explained.

"You know, facilities are coming down and going up so fast over here," Passwater said. "Obviously, we don&#8217;t want to plant a tree and have to go in and rip it out and retransplant it somewhere else later."