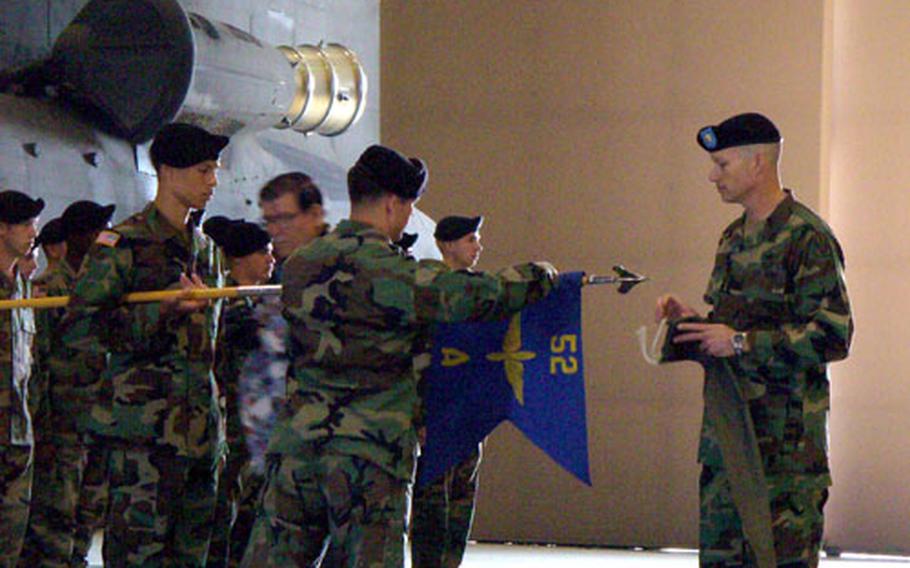 Following the ceremony, Company A soldiers lined up for hamburgers and hot dogs at a cookout marking the unit’s new assignment. (Franklin Fisher / S&S)

CAMP HUMPHREYS, South Korea &#8212; A South Korea-based Army helicopter unit set to relocate to Texas marked the upcoming transfer with a ceremony Monday followed by a cookout and day of sports.

Company A &#8212; of the 2nd Battalion, 52nd Aviation Regiment &#8212; departs Camp Humphreys next month for Fort Hood, Texas, where it will become part of the 1st Cavalry Division&#8217;s aviation brigade. Known as the &#8220;Blackcats,&#8221; Company A is a CH-47 Chinook helicopter unit that ends 32 years of continuous service in South Korea.

Company A also held a separate &#8220;bury-the-hatchet&#8221; ceremony Monday to end &#8212; more or less &#8212; a friendly rivalry with a sister Chinook unit, one marked by 32 years of tit-for-tat practical jokes and other good-natured mischief.

Company B of the same battalion was the longtime rival, stationed at the other end of the flight line, Jessee said.

At times, each company would seek to outdo its rival by painting its signature logo on the other&#8217;s aircraft or equipment: a black cat&#8217;s paw for the Blackcats, a yellow arrow for Company B, known as the Innkeepers, Jessee said.

At the hatchet burial ceremony, a small hatchet, with the unit coin of both companies affixed to the handle, was laid in a hole in the ground, into which both company commanders threw a few shovelfuls of dirt. The ax was retrieved and will be displayed at the battalion&#8217;s headquarters at Camp Humphreys.

Maj. Eric A. McEldowney, Company B commander, read a proclamation at the hatchet-burial ceremony, saying in part, &#8220;This extraordinary event, as witnessed by both companies, has ensured that the BLACKCAT paw print and the INNKEEPER Yellow Arrow shall never again grace the Chinooks or any equipment of the other company &#8230;&#8221;

However, McEldowney continued, that was &#8220;unless of course they are deployed to the same location, are assigned TDY to the other&#8217;s location, or just happen upon each other, etc., etc.&#8221;

Later, at 10 a.m., the Blackcats held an official re-flagging ceremony inside the company hangar. The Company A guidon was encased, and the new colors were brought forward and uncased. They bear what will be the unit&#8217;s new name: Company B, 2nd Battalion, 227th Aviation Regiment. The company becomes the Chinook element in the 1st Cavalry Division&#8217;s 4th Brigade, the division&#8217;s aviation component, Jessee said.

Later, under blue, sunny skies, the Blackcats set up a barbecue and various sports including volleyball. Just before the cookout, the unit said farewell to its more than 20 Korean Army troops, who worked in mainly administrative jobs.