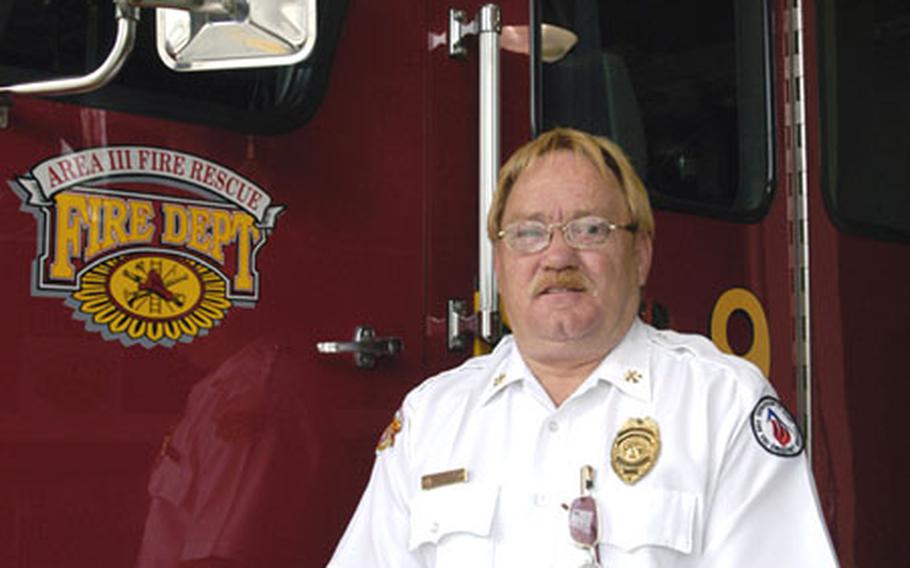 CAMP HUMPREYS, South Korea &#8212; A veteran firefighter in charge of fire safety at Camp Humphreys has been named the Army&#8217;s top firefighter on the Korean peninsula.

&#8220;He goes out and does fire extinguisher instruction, how to store hazardous fuel and stuff in flammable storage lockers,&#8221; said Marra. &#8220;He reviews all of the new buildings that are being built, he reviews the design plans to ensure that they have all of the required fire protection already installed and that it&#8217;s compatible with the systems we have already installed, so that we don&#8217;t waste money there.

The Army honored Becton on Tuesday in a brief ceremony at the Camp Humphreys firehouse.

&#8220;You protect us every day to make sure that we are safe at night, safe in the morning, safe on weekends,&#8221; Brig. Gen. John A. Macdonald, director of IMA-KORO, told the assembled firefighters.

But Becton indicated he also spends some time trying to prevent logistic, as well as real-time fires: He&#8217;s already keeping a concerned eye on the broad program of new construction now under way at Camp Humphreys.

The fire inspection workload and staffing levels are governed in part by the total amount of square footage the office is responsible for inspecting, he said. With the Army spending millions of dollars for new barracks, family housing and other quality-of-life improvements at the camp, &#8220;right now the square footage &#8230; is supposed to triple. &#8230; If that&#8217;s the case, then yes, my office should triple in size as far as inspectors to be able to handle all the risk assessments&#8221; and other fire safety and prevention work.