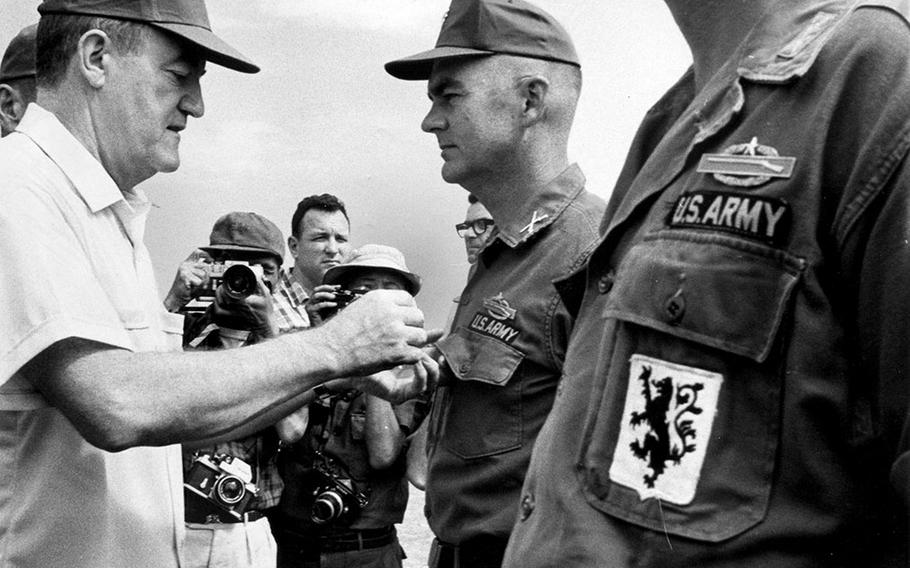 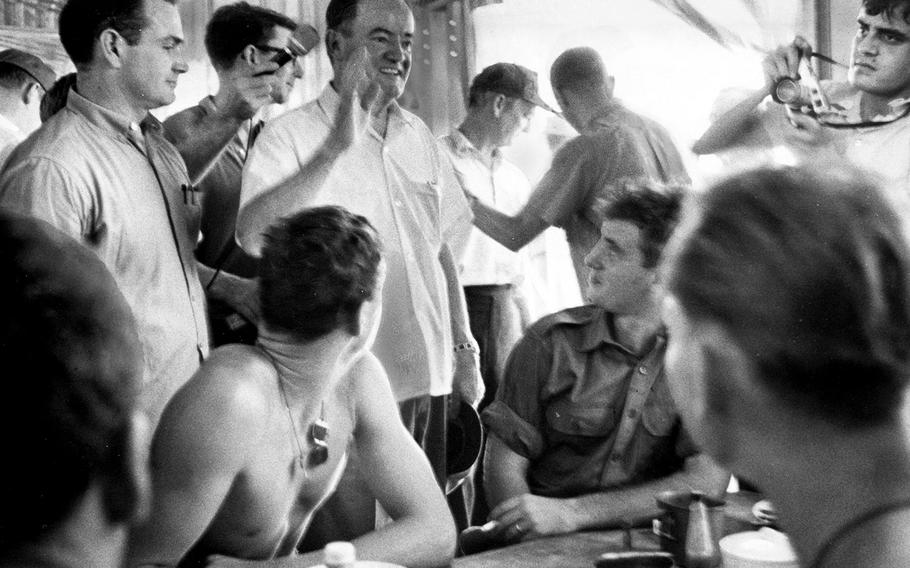 First came the trip out to the Big Red One, where Humphrey presented seven Silver Star medals to the troopers. Also offering congratulations were Gen. William C. Westmoreland, commander of U.S. Forces in Vietnam, and Ambassador at Large W. Averell Harriman.

While with this division some 20 miles north of Saigon, Humphrey visited the 1st Medical Bn. hospital and shook hands with the patients.

Ironically, the battalion had suffered the first death among the medical staff the day before, when a sergeant helping repair a school in the village nearby was gunned down by a VC who had grabbed the trooper's weapon while he was working. Another trooper was slightly injured.

Artillery thundered in the distance and air strikes were underway overhead as Humphrey's party moved on to visit the Korean unit several hundred yards away. Because of sniper activity in the area, the group was lifted by helicopter for added safety despite the short distance.

Next the party made a short stop at the Bien Hoa headquarters of the Royal Australian Regt.

Humphrey was not aware of it, but an Aussie had been badly injured by a Claymore mine just 600 yards from where he was talking some six hours earlier.

After lunch the Vice President paid a short visit to the agricultural experiment station operated by the Chinese from Taiwan who are perfecting such foods as heat resistant cabbage.

The next stop was the provincial hospital at Bien Hoa, where Humphrey was somewhat shocked to discover that in the hospital that served 138,000 patients last year, there is but one staff doctor, plus a visiting surgical team from Australia.

Asked what impressed him most during his visit, Humphrey said that it was the absence of any complaints among the many people he talked with.

After leaving the Vietnamese hospital, Humphrey went to a hospital in Saigon where American wounded are treated.

He inspected a new system for providing whole blood arid passed a room where an operation was underway before moving into the wards for chats with the men.

During his visit he presented a number of Purple Hearts and signed autographs by the dozen. "The mothers want to know about their sons. What I have seen here is outstanding." 1.20996