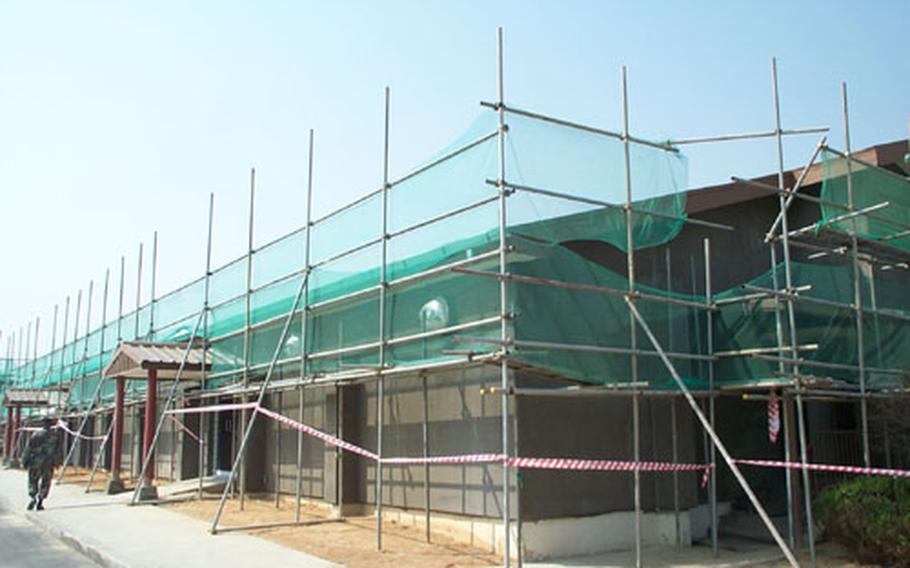 At Camp Humphreys, a U.S. Army helicopter base in South Korea, scaffolding is up around the building being refurbished for use as a spacious new home for the base bank, credit union, and post office. The structure, built in 1972, served as post exchange until a new one opened last year. (Courtesy of U.S. Army)

Soldiers at the U.S. Army helicopter base at Camp Humphreys, South Korea, soon will be able to visit the bank, credit union and post office in a single trip and transact their business in a bright, newly refurbished space.

The three will be housed in the former post exchange, which is nearing the end of a $360,000 overhaul that began in January and is to finish later this week.

&#8220;The building is totally refurbished, in and out, so it&#8217;s practically a brand new building,&#8221; said Bart Mirabal, Camp Humphreys&#8217; public works chief. The former exchange, built in 1972, was closed last summer after a newly constructed PX opened for business across the street.

The former PX will allow its three tenants not only more space but a chance to improve customer service, in addition to the convenience of having all three in one spot. Each will have its own entrance to the one-story building, which measures 13,092 square feet, Mirabal said.

&#8220;It&#8217;s very comprehensively designed to be independent, and very convenient because it&#8217;s centrally located, right &#8216;downtown,&#8217;&#8221; Mirabal said. The site is across from the PX, near the base theater, gym, community activities center, bus station, Burger King, and the under-construction base commissary, he said.

The refurbished building &#8220;is providing a much better service in a much nicer and a much larger facility,&#8221; he said, &#8220;and it will also provide the additional capability&#8221; to serve a base population expected to grow in coming years as the U.S. military shifts troops into the Pyongtaek region, which takes in Camp Humphreys and Osan Air Base.