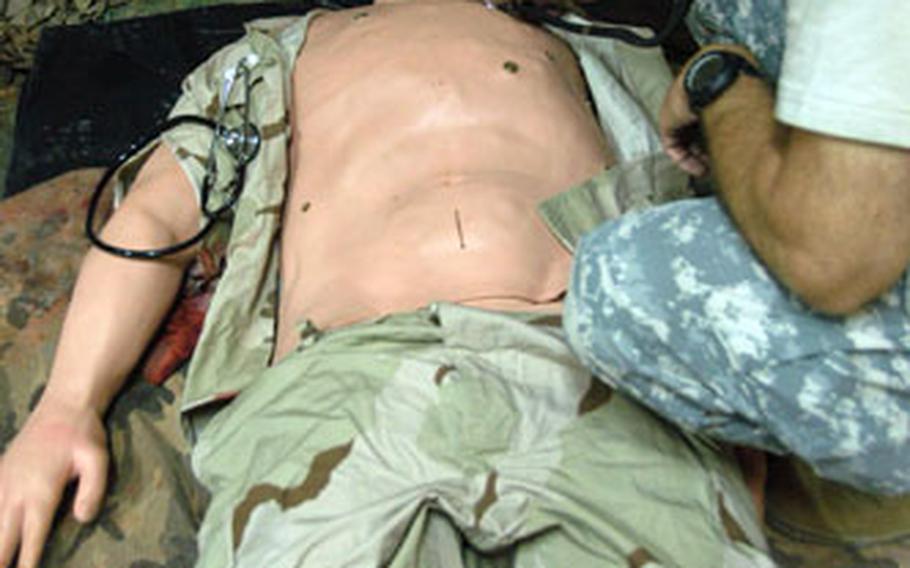 LOGISTICS SUPPORT AREA ANACONDA, Iraq &#8212; Even in complete darkness, you can feel it: The man is alive.

His chest is rising and falling regularly, and he has a slow, strong pulse in his wrist. For the moment, despite grossly disjointed limbs, METI-man seems to be hanging in there.

His pulse speeds up, then stalls as one lung suddenly shuts down. He begins to audibly choke on bile, or, more disturbingly, actually tells you &#8212; screams at you &#8212; that something hurts.

The reactions are all features of one of the newest, most high-tech pieces of equipment at the Jameson Combat Medic Training Center in Balad, Iraq&#8217;s premiere facility for training medics and troops in first-response skills: the Medical Educational Technology Inc. dummy known as the METI-man.

With the METI-man, gone are the days of the stocky, torso-only mannequins with shiny rubber skin. The new model has functioning lungs, a basic circulatory system, teeth, a tongue, blinking eyes and complete (and interchangeable) sexual organs.

It squirts fake blood from detachable limbs, gurgles and wheezes depending on his ailments and comes equipped with a microphone system that allows the instructor to talk for the dummy.

The full size and weight of a soldier, the dummy has become a valuable tool since its arrival just six months ago, said training center instructor Sgt. Joshua Sturtzman, 25, from the 285th Area Support Medical Company, attached to the 3rd Medical Command.

An air pressure system inflates his lungs and powers other pneumatically-controlled parts. A set of hoses provides bodily fluids. The electrical component drives the various sensors in the body and hooks it up to a surrogate brain &#8212; a computer.

Sturtzman sits behind a terminal a few feet away and feeds the mannequin commands with clicks of a mouse. If he wants the eyes to close and the breathing to stop, he just chooses those options on a list of responses and the dummy responds.

If instructors want to simulate the distress of someone with a sucking chest wound, he can command the dummy to wheeze and inflate only one lung, while his blood pressure or heart rate wavers.

In an even more advanced capability, instructors can also monitor Lt. Dan&#8217;s vital signs on a screen that looks like one you&#8217;ve seen in any ICU, complete with heart rate, blood pressure and blood oxygen levels.

In one of its finest touches, it can physically respond to different injections of simulated drugs. If a medic decides to give Lt. Dan morphine (it&#8217;s actually water) Sturtzman plugs in the dosage delivered and the dummy reacts accordingly.

The basic METI-man starts at about $50,000, said program director Sgt. 1st Class Michael Manahl, with advanced models running up to $250,000.

Still, it&#8217;s worth it, Sturtzman said. Better that the students overdose METI-man with IV fluid than a wounded man in the field.