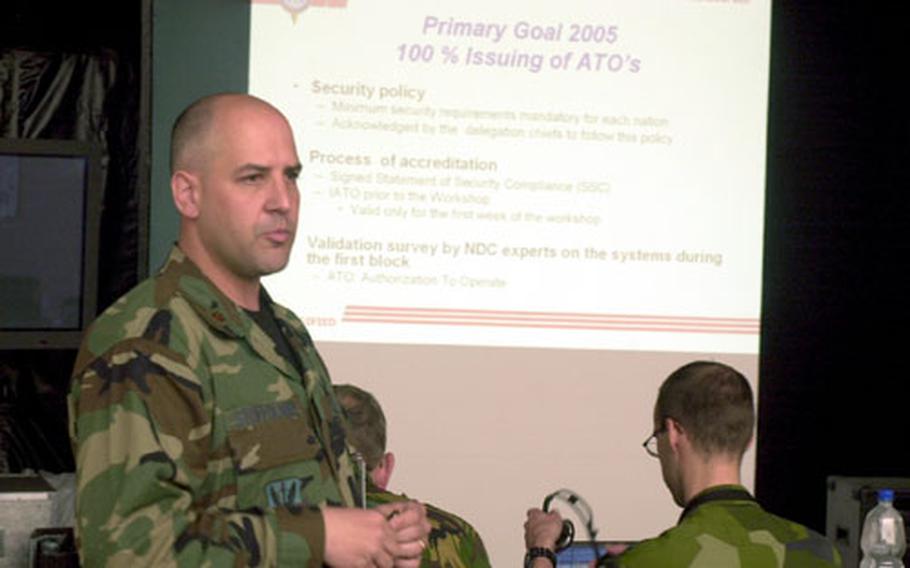 People coming out of the Air Force and its culture emphasizing customer service have a leg up in the corporate world, said Capt. Brad Stoffolano, an Air Force reservist and civilian consultant. Stoffolano, who oversaw the network defense cell, gave a systems security brief during last week’s Combined Endeavor exercise in Baumholder, Germany. (Terry Boyd / S&S)

Every minute of every day, techno-crooks are cooking up new ways to invade your virtual life, and then ruin your real one.

And all this digital mayhem is also creating big opportunities. In 2003, the United States spent 2.6 percent of its gross domestic product &#8212; the combined value of all goods and services &#8212; on network security, fighting spam and securing e-mail.

Spammers fill up e-mail with advertising.

Once hackers have control of a computer, they often put their own &#8220;patch,&#8221; or block, on the system to prevent other hackers from doing the same, said Capt. Brad Stoffolano, 39, director of operations for the 102nd Information War Squadron, a reserve unit in Rhode Island.

And they can do it all without being detected.

Those high-tech problems can be career opportunities for military members with computer skills.

Viruses and hackers are problems for all computers and networks, Stoffolano said. At last year&#8217;s Combined Endeavor 2004, the CodeRed &#8220;worm&#8221; &#8212; a virus with self-generating computer code &#8212; shut down the exercise&#8217;s network by flooding it with spurious requests for information, he said.

This year, for the first time in the 11-year-old exercise, Combined Endeavor had a network defense cell of technicians monitoring the system for intruders, Stoffolano said.

On the civilian side, only about 5 percent to 10 percent of companies are monitoring their networks properly against hackers and viruses, according to O&#8217;Connor.

In broad terms, the military and its computer contractors group systems security under &#8220;C-4ISR,&#8221; which stands for Command, Control, Communications, Computer, Intelligence, Surveillance, and Reconnaissance.

He uses intrusion detection systems to monitor for viruses, hackers and to make sure authorized users aren&#8217;t doing anything unauthorized, or exposing the network, said Staff Sgt. Ben Tompkins, also with the 102nd Information Warfare Squadron.

He uses traffic analyzers to monitor networks, which &#8220;relates exactly to what I do in the civilian world&#8221; with VeriSign, a Mountain View, Calif.-based technology company, Tompkins said. &#8220;Basically, I make sure no one is breaking into the system .&#8230; protect the integrity of information.&#8221;

There are always new challenges, said Tompkins. For example, hackers can modify an existing virus just enough so it can defeat detection.

Information security technicians can counter by using stealthy sensors hackers can&#8217;t &#8220;see,&#8221; O&#8217;Connor said. They try to lure hackers with a &#8220;honey net&#8221; that appears vulnerable so technicians can analyze the tools intruders are using and block them in the future, he said. There are even &#8220;ethical hacker&#8221; courses that teach technicians how to think like hackers to better combat them.

In this perpetual game of digital cat and mouse, being in the military offers techies such as Tompkins a big advantage. Those who have experience at multinational exercises such as Combined Endeavor, where they get their hands on equipment from around the world, also have an edge in the civilian market, O&#8217;Connor said.