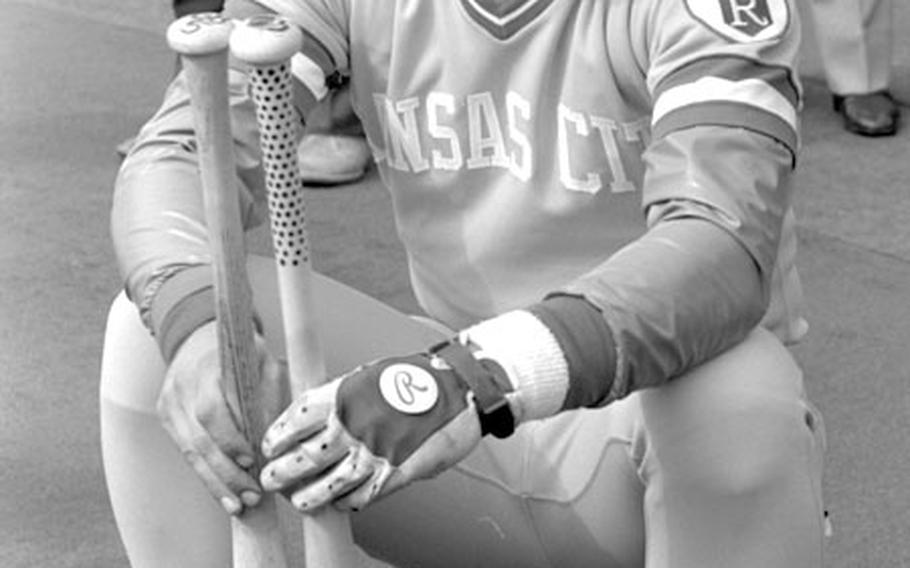 Buy Photo
George Brett of the Kansas City Royals checks out some bats during a 1981 workout at Tokyo&#39;s Korakuen Stadium ... (Harold China / ©Stars and Stripes)

Buy Photo
George Brett of the Kansas City Royals checks out some bats during a 1981 workout at Tokyo&#39;s Korakuen Stadium ... (Harold China / ©Stars and Stripes) 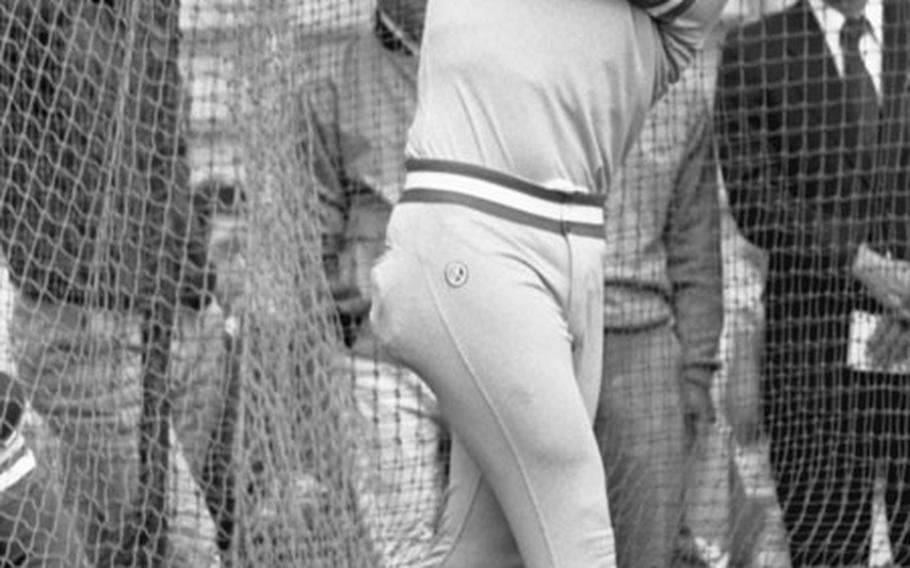 Buy Photo
... then takes his turn in the batting cage. (Harold China / ©Stars and Stripes)

TOKYO &mdash; The Kansas City Royals field skipper says his club, while sound pitching-wise and defensively, is looking to add more offense, specifically in the form of a right-hand hitting outfielder.

It means, according to Dick Howser, that the Royals are considering testing the free-agent market.

"We're a good, sound ball club, but we're looking to improve our offense," Howser said. "We'll be taking a good hard look at the free agent market &mdash; I don't know if we'll come up with anything, but we'll certainly be competitive without disrupting our salary structure."

Howser said that means if Kansas City does go after free agents, their salaries would not exceed those of third baseman George Brett and pitcher Dennis Leonard.

"I like management's thinking on this &mdash; we've got two high-priced players (Brett and Leonard), they're home grown, they have come up through the organization, and no free agent's salary should be more than theirs," said Howser.

He did not mention names, but did say through free-agency or by trade, one thing the Royals need is a power-hitting outfielder.

"We have some people (in the organization) who could probably do it, but I would like to get somebody who's established and I think we're moving in that direction," he said.

Two outfield positions are already set, though there was doubt until longtime center fielder Amos Otis signed a new contract with the Royals last week. Switch-hitting speedster Willie Wilson seems to be established in left field, with Otis in center, but Howser indicated that could change.

"I haven't discussed it with Amos yet," Howser said, "but he could be one of our off-outfielders (left or right field) next season." At the start of the 1981 season, the Royals had experimented with Wilson in center and Otis in left.

Meanwhile, a former Royal who played with the Yokohama Taiyo Whales this season, Pete LaCock, has sounded his intention of returning to the Royals next season.

Howser said he had not spoken to LaCock about it, "but some of our players mentioned he was in Kansas City before we left to come to Tokyo," Howser said.

The Whales have told LaCock they would release him from the second year of his two-year pact if he finds a place on a team in the States.

Howser, who replaced Jim Frey as Royals manager Aug. 31, says he considers himself fortunate to have managed in two playoffs, though his teams lost three straight games both times.

"There's a lot of managers and players who (work) all their lives and never get that far," Howser said. Last season, Howser managed the New York Yankees against the Royals and Frey in the playoffs. Kansas City swept the Yanks and went on to lose the World Series in six games to the Philadelphia Phillies. Howser resigned under pressure following the playoff loss.

This season, the Royals managed to score two runs in three playoff losses to Billy Martin and the surprising Oakland A's.

"That's not enough to win," Howser said. "Our pitching was excellent against Oakland &mdash; we just didn't get any runs.

"That may be one of the reasons we're looking ahead to next year to try to get some offense. Our offense was good at times, but not consistent," Howser said.

The Royals began a 17-game goodwill tour of Japan Saturday at Korakuen Stadium in Tokyo against the Japan baseball champion Yomiuri Giants.