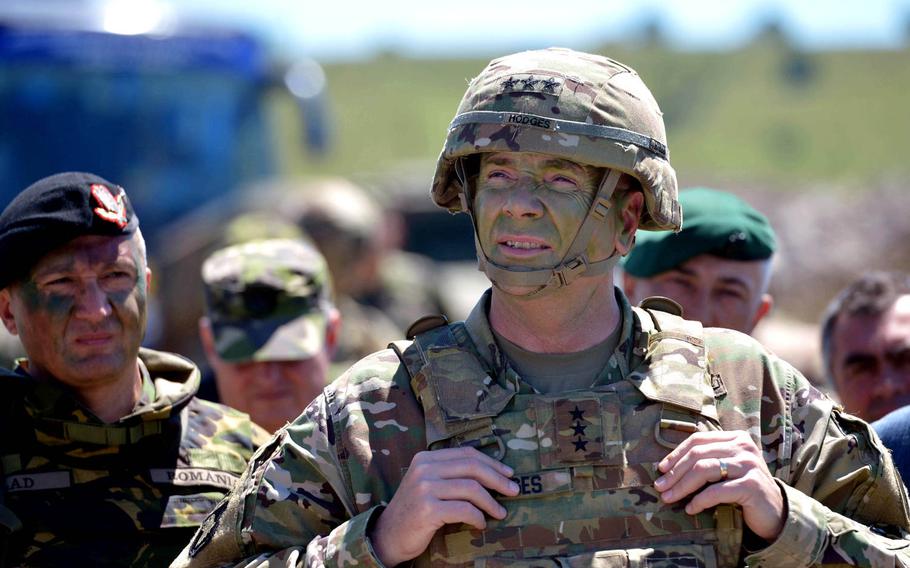 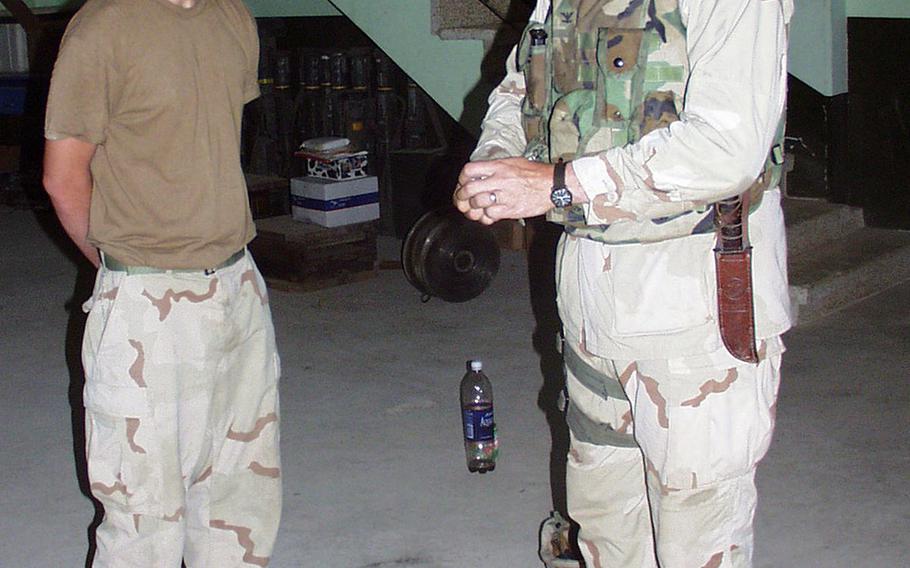 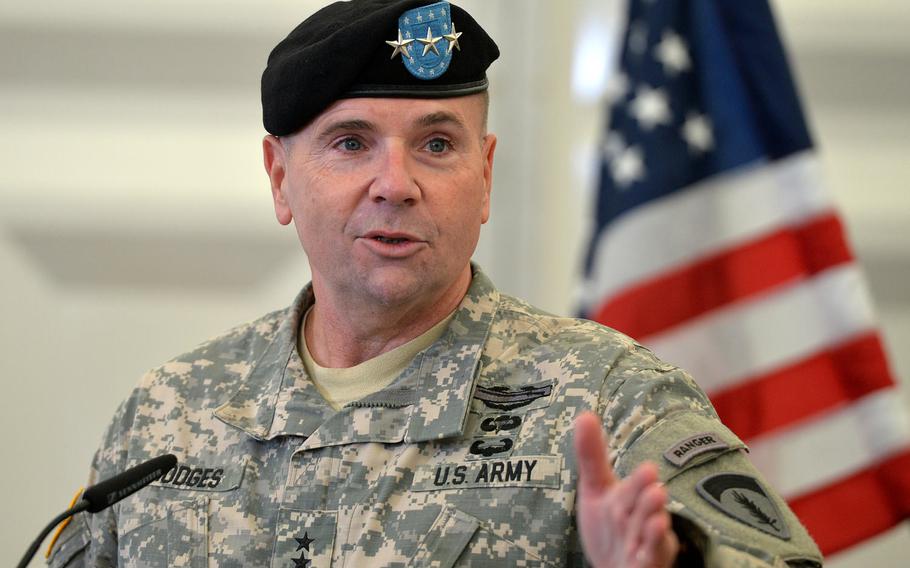 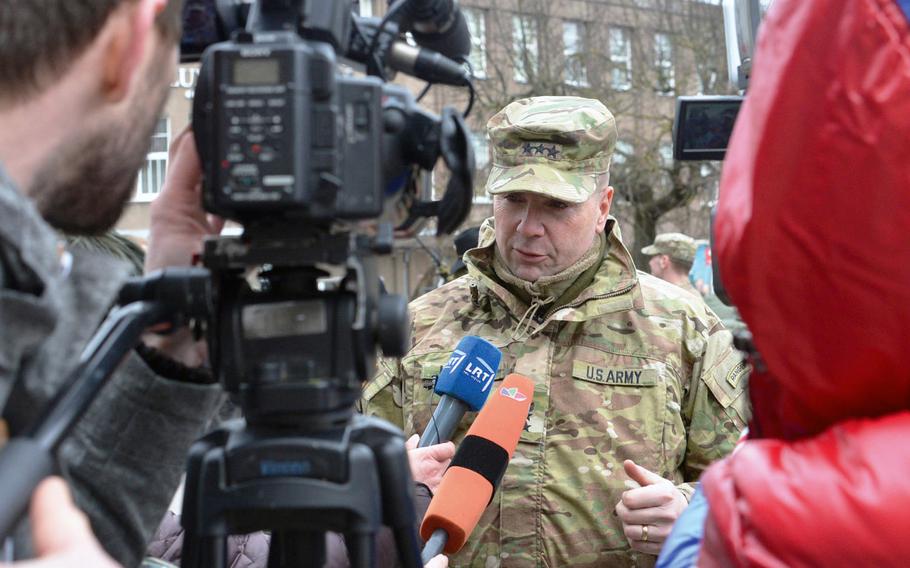 STUTTGART, Germany — The resources didn’t match the mission, and it gnawed at Lt. Gen. Ben Hodges during the early days of his tenure commanding U.S. Army Europe, which comes to an end Friday.

A message, Hodges thought, needed to be delivered to policymakers that his command of 30,000 soldiers was stretched thin.

The catchphrase, which bubbled up inside Hodges’ head on a flight to Berlin in 2014, eventually became a mantra at USAREUR headquarters, parroted by junior officers in the field all the way up the line to NATO’s supreme allied commander at the time, Gen. Philip Breedlove, who also ran with the message.

Hodges’ penchant for blunt talk about the Army’s needs in Europe to counter a more aggressive Russia was sometimes an irritant in Washington, where Pentagon officials were known to complain behind closed doors about the outspoken general.

But Hodges’ three-year tenure at USAREUR has been arguably the most consequential in Europe since the end of the Cold War, with the Army serving as the centerpiece of the Pentagon’s efforts to energize what had been a languishing military mission. Hodges is set to retire Friday in a change-of-command at USAREUR’s headquarters in Wiesbaden, Germany.

“I think that Ben had to learn his way in this business (of speaking out), but it was very important to do what he did, and that is to speak truth openly and sometimes speak truth to power,” said Breedlove, also was known for an outspokenness unusual among active-duty leaders.

“And we both got some tail feathers singed once or twice because of that,” said Breedlove, who led U.S. European Command from 2013 to 2016.

Hodges, who will retire after a 37-year career in the Army that began as a lieutenant in Germany during the Cold War, has held commands in Iraq and Afghanistan and will step down at a time when Russia is again regarded as Europe’s chief security threat.

As Hodges pushed for more agility in places such as Poland and the Baltics, he did so by highlighting what he saw as a need to adapt to a more aggressive Russia.

In making appearances on German talk shows, speaking at think tanks and universities, and giving countless interviews with international media, Hodges broke precedent by sidestepping the bureaucratic gatekeepers that help shield senior leaders from scrutiny and gaffes. Hodges’ penchant for speaking out date to his time as an Army congressional liaison, when he served as an advocate for the Army.

During one of those stints, the former chairman of the House Armed Services Committee, Ike Skelton, an early mentor, once chastised Hodges, saying the Army didn’t know how to communicate.

“He (Skelton) said, ‘You guys have the best story to tell, but you are the worst at telling it. You guys being the Army,’ ... and he really hit me pretty hard,” Hodges said.

About the role of land power in Europe and the importance of NATO, Hodges said, “I always felt it was my duty to help explain. I believe it so strongly. I look for every opportunity, whether it is a kindergarten class or a professional journalist or a think tank, trying to explain all those things.”

In an age of “information war,” an adversary’s narrative of events needs to be countered rather than left to stand unchallenged, which sometimes requires military leaders to adopt a more public role, Breedlove said.

“Ben was not shy to make sure that what he saw as the appropriate and right narrative did get on the street,” Breedlove said.

Hodges’ warnings have been severe at times. He argues that Russia aims to split NATO apart and that the West should find ways to make Moscow’s intervention in Ukraine more painful. He’s spoken of the need for allied unity but also called members out.

“For the most powerful nation in Europe, which takes a leadership role in the (European Union), it is unacceptable to have helicopters that don’t fly, or aircraft you can’t use,” Hodges said of Germany, raising eyebrows at the time in Berlin.

Such statements have grated on some ambassadors in NATO and sparked charges that Hodges is overly hawkish. Former German Foreign Minister Frank Walter Steinmeier called USAREUR’s tank demonstrations in the Baltics and Poland “war mongering.”

In the Pentagon, Hodges has taken heat for speaking openly about weak points in the military’s Europe posture and vulnerabilities in the Baltics, one USAREUR official said.

Making the case on Russia

At the same time, Hodges outspokenness about Russia has won praise from allies in the east, where anxiety about a resurgent Russia is strongest.

“Certainly in terms of military planning, he really zeroed in on the key weak points for NATO in our region. Not only the Baltics and Poland, but also the legal blocks to the rapid movement of armor (in Europe),” said Toomas Ilves, former president of Estonia.

Lt. Gen. Patrick Sanders, British field army commander, said in July that Hodges “has done more than perhaps any other individual in NATO to put substance behind assurance and deterrence.”

At the beginning of his tenure at USAREUR, not everyone back in Washington saw the urgency of the Army’s mission in Europe or the threat Breedlove, Hodges and others operating on the Continent saw in Russia.

That changed after Russia’s intervention in Ukraine in 2014. Moscow’s annexation of the Crimean Peninsula and its support of pro-Russian separatists rattled allies. EUCOM sought to pick up the pace of operations on NATO’s eastern flank, but resources were lacking.

The number of soldiers had dwindled to 30,000 after two decades of drawdown. In 2014, the Army, facing budget pressures, was poised to cut its aviation brigade in Europe and was considering other reductions.

“I think it would be fair to say that outside of Europe, or outside EUCOM, people back in the States — good smart people — were not really convinced,” Hodges said. “There were some skeptics that would say this is to try and justify something else, which is not unnatural or unreasonable. But it also was not true.”

If the Army was going to do more with just 30,000 soldiers, Hodges argued, it would have to give more power to junior officers, get more help from allies and get more troops rotating to Europe from the U.S. He was confident in the first two, he said, but uncertain about the last.

The steady drum beat from commanders in Europe has resulted in more resources. In 2015, months after the last battle tanks left Germany, the Army began to return armor, including Abrams tanks. Then came the positioning of a brigade’s worth of combat-ready gear throughout Europe. Ammunition stockpiles flowed into warehouses, and a headquarters was established in Poland to manage the movement of attack helicopters and a heavy brigade of infantrymen on regular maneuvers.

A key achievement for USAREUR, Breedlove said, was “re-energizing” the Army’s exercise program as soldiers relearned how to face a large, capable enemy after a decade of counterinsurgency fighting. Hodges also took on the challenge of moving forces around Europe with greater speed, conducting convoys up and down NATO’s eastern flank to test the Army’s ability to mobilize.

The convoys, often carried out by the 2nd Cavalry Regiment on “Dragoon Rides,” were part of a broader effort by USAREUR to map the terrain in Eastern Europe, identifying bottlenecks, weak bridges and anything else that could slow forces in the Baltics and Poland. Twenty-five years after the Cold War, the Army needed to master the boggy Baltic terrain and learn how rail systems worked in a region formerly dominated by the Soviet Union.

“That was the kind of thing that absolutely needed to be done because no one ever tried before. I think few people actually thought of it until he said we have to look at this thing,” said Ilves, whose two-term presidency in Estonia ended in 2016.

Hodges says the next step in Europe is to establish a free travel zone for alliance military convoys that would relieve forces of diplomatic clearances that can slow response times.

If “making 30,000 soldiers look like 300,000” was a USAREUR mantra, “speed of assembly” and “freedom of movement” were the operational focal points.

“I never wanted to be found wanting,” Hodges said. “The whole freedom of movement, speed of assembly, getting caught unprepared — I worry about that every day. Not because I think it is going to happen. But that is my main responsibility, for us to be ready.”

As the Army continues its search for a permanent replacement for Hodges, Maj. Gen. Tim McGuire, who has served as USAREUR’s second in command since June 2016, will be acting commander.

Upon retirement, Hodges will move to home to Florida. He plans to stay involved in security issues in Eastern and central Europe, working with the Center for European Policy Analysis think tank.

Still, retirement doesn’t feel like welcome relief from the Army, he said.

“There is not a thing I am not going to miss,” Hodges said.