How toxic was Camp Lejeune’s water? 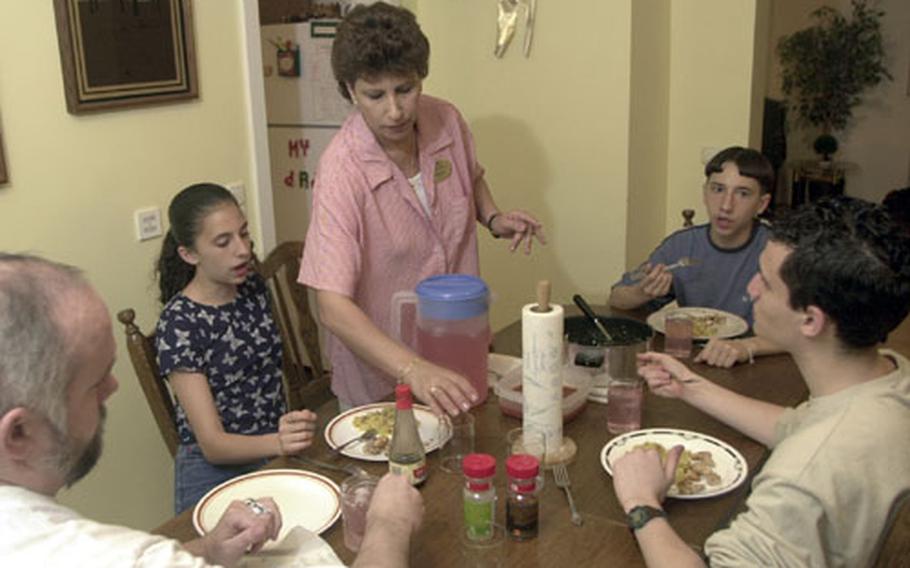 The Rose family, clockwise from left: Jeff, Dahlia, Hilda, Nathanial and Daniel enjoy dinner at their Auerbach, Germany, home in May 2001. Nathanial Rose, who was born in North Carolina and lived at the Camp Lejeune Marine Corps base when the drinking water was contaminated. He links his health problems with the poisoning of the wells there. (Raymond T. Conway / Stripes file photo)

At 21, Nathanial Rose worries not about girls, or cars, or hanging out with friends. He worries about whether he&#8217;ll survive his failing kidneys.

&#8220;I&#8217;ve had kidney problems since birth. But it&#8217;s getting worse. A lot,&#8221; said Rose, who was born in North Carolina and lived at the Camp Lejeune Marine Corps base when the drinking water was contaminated. He links his health problems with the poisoning of the wells there.

Rose &#8212; who now lives in Vicenza, Italy, with his mother &#8212; was one of about 16,500 people identified by the Marine Corps and U.S. federal health officials as qualified for participation in a health study surrounding the contamination of drinking water at Camp Lejeune and childhood illnesses.

On Tuesday, the Agency for Toxic Substances and Disease Registry, a unit of the U.S. Department of Health and Human Services, which has long been probing the matter, released a report measuring the levels of tetrachloroethylene, or PCE, in past drinking water for the Tarawa Terrace housing area.

The levels were measured using water-modeling techniques and historical reconstruction.

&#8220;They&#8217;ve known for quite a bit of time that the drinking water was contaminated, but it&#8217;s never been established by how much it was contaminated,&#8221; Charles Green, an ATSDR spokesman, said of the study released Tuesday.

About 75,000 Marines and families lived in Tarawa Terrace family housing from November 1957 through February 1987, years in which experts believed well water was contaminated.

In May 1982, scientists found the presence of degreaser tricholoroethylene, or TCE, and the dry-cleaning solvent tetrachloroethylene, or PCE, in the drinking water at Tarawa Terrace and Hadnot Point. But wells supplying water to the housing complexes were not shut down until 1985.

Eventually, the source of the contamination was traced to a commercial dry cleaner near the main gate and a vehicle maintenance and body shop on the base.

PCE, widely used for dry cleaning, is a volatile organic compound that the Department of Health and Human Services has determined may reasonably be anticipated to be a carcinogen, the ATSDR states. Some scientific literature has associated the compound with birth defects and childhood cancers.

Some studies of people exposed over long periods to high levels of TCE in drinking water or in workplace air have found evidence of increased cancer, according to ATSDR.

The agency is still studying whether exposure to the drinking water is directly related to specific birth defects and childhood cancers, Green said. The results of that study are expected by the end of the year. A water modeling study is also under way for the Hadnot Point housing area, he said. No timeline has been announced for those results.

In 2004, ATSDR released results of a health survey of 12,598 children born to women who lived at Camp Lejeune from 1968 to 1985, which revealed 103 of the children suffered childhood cancers or birth defects.

But that study, focused on babies born at Lejeune during those years and those up up to 1 year old, neglects thousands more people, says Terry Dyer, who was nearly 2 when her family moved to Lejeune, where they lived from 1958 to 1973. She and her two sisters all have had radical hysterectomies, the only women in the family to have to undergo the procedure, she said.

They also have suffered miscarriages, thyroid conditions, tumors, cysts, skin diseases, and asthma &#8212; to name a few ailments, she says. &#8220;Growing up, we were always sickly. That just isn&#8217;t normal,&#8221; Dyer said Monday in a phone interview from Washington, D.C., where she planned to attend the first congressional hearing to probe the Camp Lejeune debacle.

There are 853 pending legal claims by people who lived at the Marine base, both military and civilians, said Pat Leonard, director of the Navy&#8217;s Office of The Judge Advocate General Claims, Investigation and Tort Litigation. The Navy intends to wait for results of the ATSDR study to determine if exposure to the contaminated water can directly be linked to medical conditions, she said, &#8220;and then evaluate each on individual merits.&#8221;

On Tuesday, the House Committee on Energy and Commerce&#8217;s subcommittee on oversight and Investigations of held a hearing titled &#8220;Poisoned Patriots: Contaminated Drinking Water at Camp Lejeune.&#8221; The hearing was to delve into why the Pentagon and EPA are not held more accountable, chairman Rep. John Dingell, D-Mich., said during an opening statement. It will look into why the Corps has failed to provide documents to health officials and why the military didn&#8217;t shut down wells even though it knew they were contaminated, he said.

The Marine Corps has tried to provide health officials with all records possible, including maps, contracts and technical information, according to Marine spokesman Maj. Jay Delarosa. But some records have been lost as a result of a poor archiving system, he said.

&#8220;The health and safety of our Marines and their dependents is of primary concern to the Marine Corps,&#8221; the service said in a statement. &#8220;Base officials provided drinking water consistent with industry practices at the time.&#8221;

Have you been affected?To find out the levels of PCE and PCE degradation byproducts that were in their drinking water while they lived at Camp Lejeune&#8217;s Tarawa Terrace housing, affected personnel can look at the ATSDR Web site at: www.atsdr.cdc.gov/sites/lejeune and enter the dates they lived there.

Opening statements, the witness list and written testimony from a House subcommittee hearing on the issue held Tuesday is posted at: energycommerce.house.gov/cmte_mtgs/110-oi-hrg.061207.Witness.list.pdf.