How to get more yen for your dollar 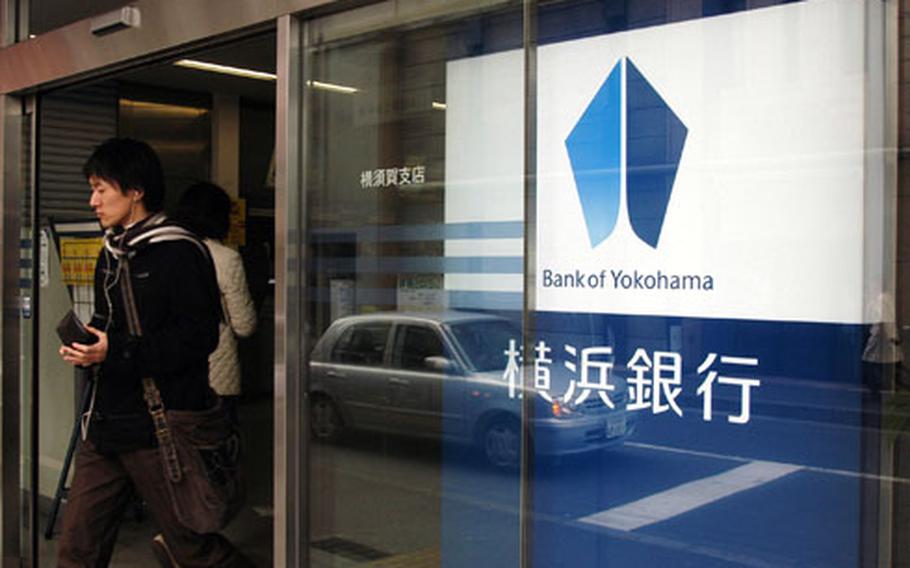 A customer exits the Bank of Yokohama in downtown Yokosuka on Wednesday. When the dollar rises quickly against the yen, off-base banks can provide a better exchange rate than the military bank rate. (David J. Carter/S&S)

The following corrections to this story were posted Feb. 14:A Feb. 15 story should have said some Pacific military bank branches may at times change their exchange rates during mid-day, while off-post banks&#8217; policies on mid-day changes vary. Also, the rent example in yen should have been 150,000 yen, not 15,000 yen.

YOKOSUKA NAVAL BASE, Japan &#8212; Petty Officer 3rd Class Blake Jones wasn&#8217;t surprised to hear that he wasn&#8217;t getting the most yen for his dollar on Monday afternoon.

Meanwhile, Japanese banks were offering nearly 91 yen to the dollar before they closed Monday.

If the dollar rises sharply against the yen or South Korean won in a given day, servicemembers will likely get a better rate at an off-base bank, according to an analysis of Community Bank exchange rates in 2008 and 2009.

The exchange rate difference was tiny Monday for someone who needed foreign currency to buy dinner or catch a movie. But someone paying their 15,000-yen rent would have spent about $60 more that day if they exchanged dollars for yen at Community Bank.

The bank&#8217;s 87-to-1 yen rate for Monday was provided to Stars and Stripes for printing in that day&#8217;s newspaper, which actually was printed and distributed Sunday afternoon in Japan. Therefore, the bank&#8217;s pre-determined rate does not take into account Monday morning&#8217;s actual market prices.

Meanwhile, Okinawa&#8217;s Bank of the Ryukyus, and the mainland&#8217;s Mizuho and Mitsui Sumitomo, had all raised their rates to between 90.87 and 90.99 yen to the dollar Monday to reflect market activity.

Some servicemembers say that if they&#8217;re not exchanging vast sums, Community Bank is still the preferred way to complete a transaction.

For example, the dollar lost about 11.5 percent against the South Korean won Oct. 30. South Korean banks adjusted their rates in mid-day to somewhere between 1,200 and 1,250 won to the dollar.

But right up until Community Bank closed, it was still offering won at 1,363 to the dollar. It waited until the next day to lower its rates.

Community Bank referred Stars and Stripes to its parent company, Bank of America, for comment on how it develops its exchange rates.

Bank of America had not responded to a Stars and Stripes query by deadline.

A spokesman at Mizuho Bank, one of Japan&#8217;s largest financial companies, said the bank usually posts its dollar exchange rates at around 10 a.m.

"The rate adapted for foreign money exchange is the same for those customers with or without our bank account," said the spokesman, who could not be identified per company policy.

Some banks, like Shinsei Bank, offer slightly better rates to account holders. Servicemembers looking for the best rate should check if there is a commission associated with changing money.

While Japanese and South Korean banks usually retain their rate throughout the day, they may change their exchange rates mid-day during volatile markets.

Where to find currency rates

Shinsei Bank (http://www.shinseibank.com/english/#) includes regularly updated exchange rate information at its site. Go to "Products and Services" on the left-side menu. Daily exchange rates at other banks in Japan tend to vary slightly.