How to crash a flight simulator on the first try 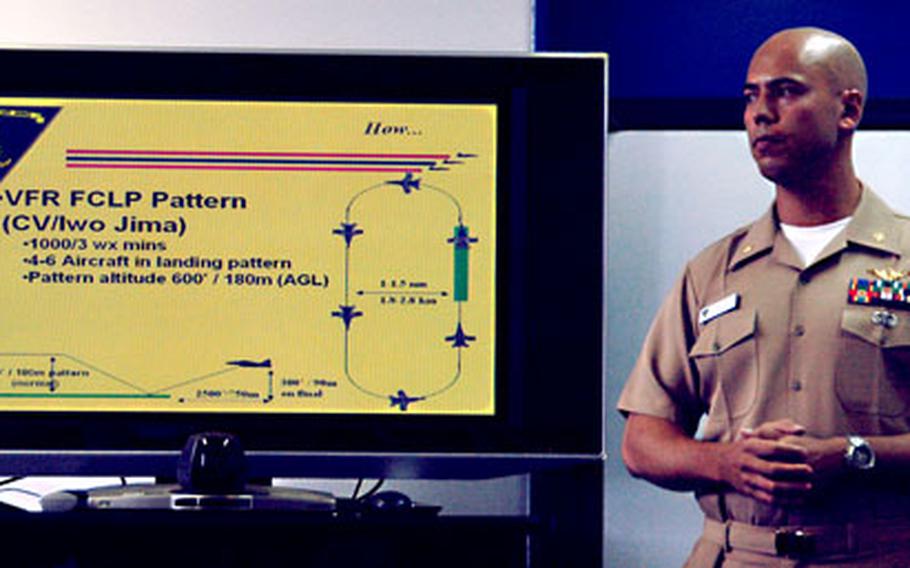 The fictional mob boss Vito Don Corleone couldn&#8217;t have made an offer harder to refuse.

&#8220;Sounds great,&#8221; I answered, trying to sound cool. In my head, I was already strolling down the flight line with Goose.

At Naval Air Facility Atsugi on Wednesday, I and several other reporters were briefed about field carrier landing practices at the headquarters of Carrier Air Wing 5.

Afterward, we had the opportunity to experience the latest in simulator technology.

Strike Fighter Squadron 192&#8217;s Lt. Andrew Craig took us to a small, highly secure building. A gentleman named Robert greeted us. He wore a rumpled jacket and had the glint in his eye of a man who knew ... stuff.

We entered the simulator room.

According to the Link 3 Communications Web site, the maker of the system the Navy currently uses, &#8220;the SimuSphere, is a dodecahedron-shaped, visual-system display that provides equally high visual scene brightness and resolution across all of its same-sized pentagonal facets.&#8221;

It looked like a giant five-sided die, surrounded by mirrors, sitting in the center of a dark chamber. Enveloped in the center, I could make out the cockpit of a jet fighter.

The room&#8217;s darkness was set against multi-colored lights reflecting in the mirrors. It was a total Discovery Channel moment &#8212; very high-tech and very cold.

I climbed into the seat.

The panels changed color and suddenly we were flying over the ocean at night. The way the screen completely enveloped the cockpit caused a weird sense of movement, even though TOFT doesn&#8217;t move.

In the distance, something &#8212; I couldn&#8217;t quite make it out &#8212; was way below me. As my jet approached, that something slowly began to resemble a Nimitz-class aircraft carrier.

I could read air speed, distance and other cool fighter-jet stuff on the heads-up display. One hand held the joy stick. It controlled direction and a bunch other things I had no idea about.

The other hand was on a duel throttle, each one controlling the thrust of a virtual General Electric F404 turbo fan engine. Pushing the throttle forward was like stepping on the gas &#8212; a lot of gas.

The joy stick had a tendency to return to its starting position. Causing the plane to change direction took only the most subtle of movements &#8212; a skill set that I clearly had underestimated.

Numbers scrolled in front of me. A little faster, a little higher, no wait lower, to the right, to the left.

I could hear someone behind me gasp.

I approached the back of the ship low, pulled up on the stick, over-corrected and came left.

I flew directly into the port rear quarter of the ship, destroying the landing signal officer platform and the plane I was flying, and left the aft of the ship covered in burning jet fuel.

As I walked back to the conference room, an F/A-18 roared in for a safe landing on the runway.

NAVAL AIR FACILITY ATSUGI, Japan &#8212; U.S. Navy officials are reaching out to Japanese media in hopes of better explaining the importance of field carrier landing practices &#8212; training on land before qualifying on an aircraft carrier at sea.

With landing practices scheduled at Iwo Jima on Friday through Thursday, the Navy invited the media to Atsugi on Wednesday for briefings and an opportunity to experience an F/A-18 flight simulator. Navy officials also said they would fly the media out to the Iwo Jima landings.

Iwo Jima is the Navy&#8217;s primary location for conducting landing practices. However, sometimes time constraints and inclement weather can cause the training to be moved to mainland facilities, according to Commander, Naval Forces Japan spokesman Cmdr. Dave Waterman, who said the Navy is trying give the Japanese media a better understanding of what it takes to keep pilots qualified.

At Carrier Air Wing 5&#8217;s headquarters on Wednesday, officials explained the timelines required for pilot training and steps taken by the Navy to minimize noise pollution if the training is diverted to a mainland facility.

Over the years, Japanese citizens have filed lawsuits over the noise of aircraft at military bases in Japan and on Okinawa.

When the training is diverted to a mainland facility, the Navy changes the parameters of the training in an effort to mitigate the impact of noise on the local population, officials said Wednesday.

These steps, according to the briefing, include increasing the pattern altitude, refraining from conducting flight operations between 11 p.m. and 6 a.m., minimizing the use of afterburners, limiting the number of aircraft permitted in the pattern and refraining from jet-engine testing between 6 p.m. and 8 a.m.