How the Pentagon could cut forces in Germany, and which bases might be affected 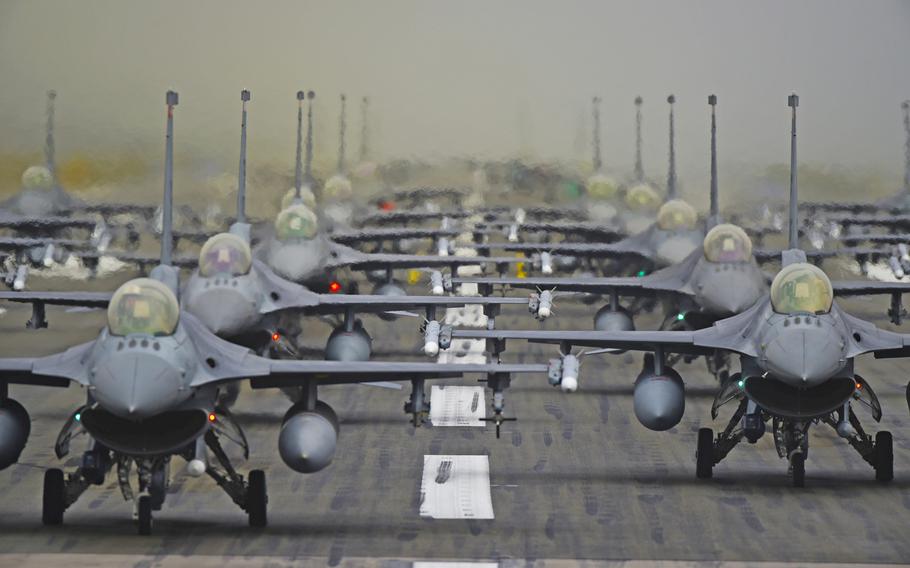 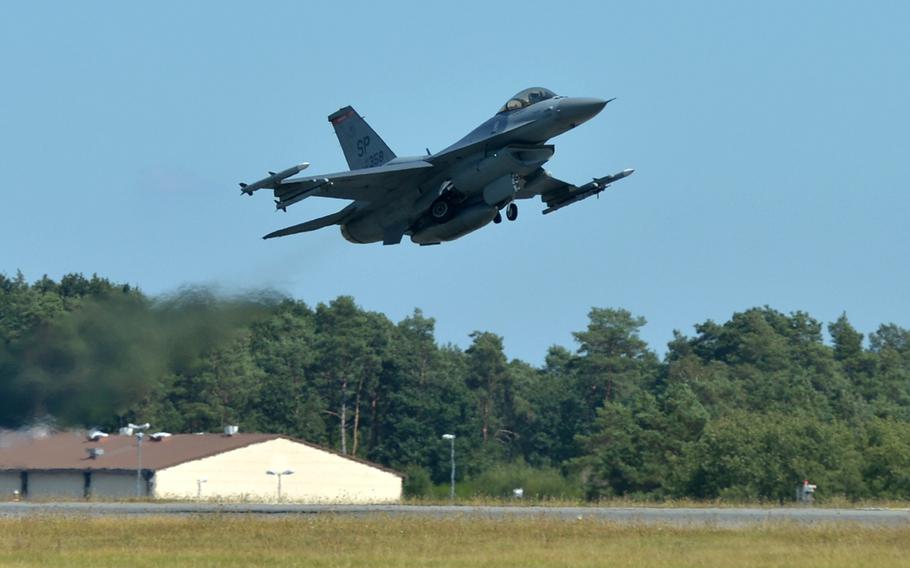 A Spangdahlem Air Base, Germany-based F-16 jet from the 480th Fighter Squadron takes off from the base in August 2018. The squadron might move under President Donald Trump's plan to remove 9,500 troops from Germany, The New York Times reported Friday. (MICHAEL ABRAMS/STARS AND STRIPES) 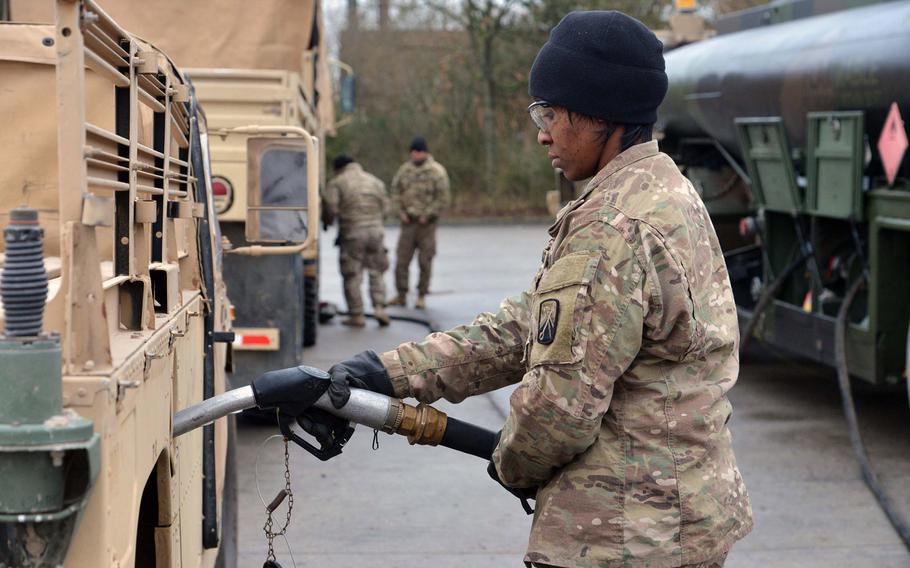 Buy Photo
Staff Sgt. Priscella Gray of the Baumholder, Germany-based 515th Transportation Company, part of the 16th Sustainment Brigade, fuels up a Humvee convoying from Bremerhaven to Poland in 2017. Army support units in Germany could leave under a White House plan to remove 9,500 troops from Germany, The New York Times reported Friday. (Michael Abrams/Stars and Stripes) 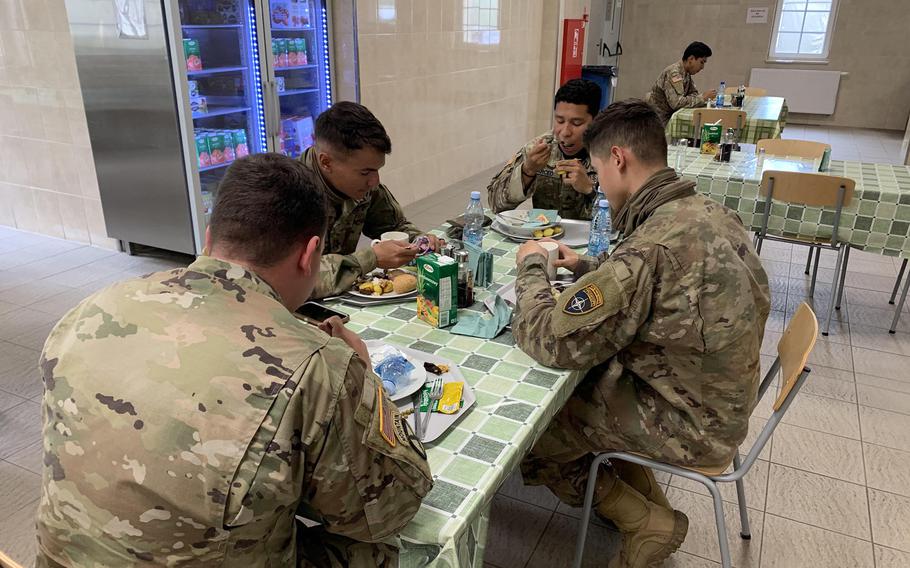 Buy Photo
Soldiers with the Enhanced Forward Presence Battle Group eat their lunch at the dining facility on Bemowo Piskie Training Area in Orzysz, Poland, on June 3, 2020. In the White House's plan to remove 9,500 troops from Germany, some would move to Poland, The Wall Street Journal reported Friday. (Immanuel Johnson/Stars and Stripes)

STUTTGART, Germany — A reported plan to remove 9,500 troops from Germany in the months ahead would strain military planners who normally have years to work out large-scale, international unit transfers that affect not only service members but their families and civilian support staff.

The Defense Department has yet to comment publicly on the order, which was first reported by The Wall Street Journal on Friday, citing unnamed government officials.

The Journal reported President Donald Trump issued a September deadline, though reports from other outlets haven’t mentioned a time frame.

A mass move would mean finding new homes for troops and their families, along with transfers of civilian workers to new posts; accounting for the space available at other bases; schools for dependents if relocated within Europe; and identifying or building infrastructure to carry out missions.

It would also follow a Pentagon stop movement order issued amid the coronavirus pandemic that has created a backlog of troops waiting to head to their next duty station.

How Poland fits in Trump wants nearly a third of the military’s roughly 34,500 troops in Germany removed with at least some of the personnel shifted to Poland, multiple reports last week said, citing unnamed government and defense officials.

Poland signed an agreement last year with the U.S. for a modest troop boost and has offered to pay for more infrastructure to host U.S. troops.

So far, there are few details on the precise units that would go, but The New York Times reported that an F-16 squadron and Army “support units” were among those identified.

In Germany, there is only one such squadron — the 480th Fighter Squadron out of Spangdahlem Air Base.

The unit has nearly 30 F-16s and is part of the 52nd Fighter Wing, which includes 5,000 airmen and civilians. It is currently the military’s only squadron in Europe with a “suppression of enemy air defense” mission, though the first U.S. F-35s are supposed to begin arriving at RAF Lakenheath, England in fall 2021.

For nearly 10 years, the Spangdahlem-based unit has carried out missions in Poland as part of the special detachment operating in the central town of Lask. That mission could be beefed up to support a full squadron.

The Pentagon has spent millions in recent years making improvements to the airfield in Lask. The squadron’s F-16s also have operated from Krzesiny Air Base in Poznan, which has emerged as a major overall hub for the U.S. military in Poland.

Still, there are no DOD schools on bases in Poland, which also lack many other quality-of-life amenities on bases in Germany. That could complicate sending large numbers of troops on accompanied tours with their families.

If Army support units move, the main one in Germany is the 16th Sustainment Brigade. It is based in several locations, including Baumholder, a small garrison town that was on and off DOD’s base closure list during the long post-Cold War drawdown.

The unit was uprooted from Bamberg in 2012 when that garrison closed. Since taking up residence in Baumholder, Kaiserslautern and Grafenwoehr, the unit has mainly been on the road in support of the Army’s expanding mission in central and Eastern Europe. Putting the unit and its roughly 2,500 soldiers in Poland would put the force closer to missions it supports in that country, as well as the Baltics.

German towns skeptical of move Any move out of Baumholder would be a major blow to that community, which relies heavily on the Army economically.

But the shift would be welcomed by Poland. Prime Minister Mateusz Morawiecki said Saturday on radio station RMF24 that he was hopeful Poland would be getting more troops.

“This will strengthen NATO’s eastern flank,” Morawiecki said. “The decision is now on the U.S. side.”

Trump’s decision to reduce troop numbers in Germany took its leaders by surprise, but it wasn’t out of the blue.

Trump has for years made threats about pulling back in Europe and complained that some allies — especially Germany — are security free-riders that underinvest in defense at the cost of U.S. taxpayers. Critics, however, say the U.S. would harm itself if it reduced its presence in Europe at a time when there are concerns about a more aggressive Russia.

In Speicher, located near Spangdahlem, the mayor was hopeful that if there is a cutback, it wouldn’t be too severe.

“I do not think that Spangdahlem will be affected — at least not at a large scale,” Mayor Manfred Rodens said.

In Grafenwoehr, the Army’s main training hub in Germany, locals also were skeptical about major cuts.

“I am convinced that nothing will change,” said Edgar Knobloch, the town’s mayor. “In the last years, the Americans have invested a lot.”