How sweet it is to win the PACAF Pentathlon 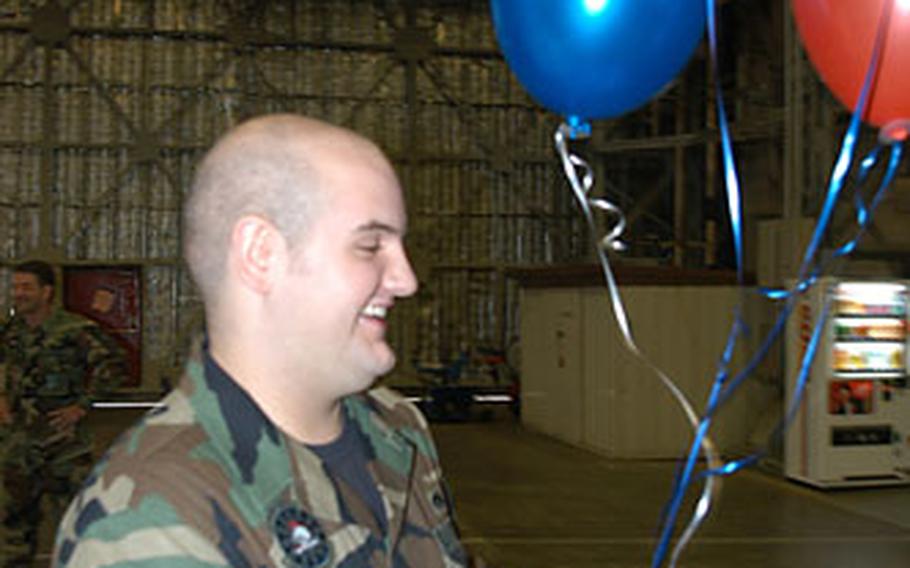 Senior Airman Jeremy Rader of Misawa Air Base, Japan, was all smiles after he found out Friday morning that he won a Hawaiian vacation for two in Pacific Air Forces’ Pentathlon game. Rader was one of three winners at Misawa. Fifteen winners throughout PACAF were chosen at random and announced. (Jennifer H. Svan / S&S)

MISAWA AIR BASE, Japan &#8212; Senior Airman Jeremy Rader thought he was in for a talking-to, the kind that quickly can spoil a Friday.

He was at the hospital to have some stitches removed when his boss showed up and told him his commander needed to see him at once.

Tech. Sgt. Chris Stougard, the squadron&#8217;s phase-inspection dock chief, figured the same when a supervisor pulled him aside Friday morning and delivered the same stern message.

Neither suspected they were big winners in this year&#8217;s PACAF Pentathlon, an online &#8220;virtual&#8221; board game sponsored by the Pacific Air Forces&#8217; Services Division.

Before announcing that Rader won an all-expenses paid trip to Hawaii, and Stougard a $1,200-exercise bicycle, maintenance squadron and base leaders made the two &#8212; and their colleagues, who also were kept in the dark &#8212; sweat for a few minutes while they stood in formation at their job sites.

They were told to be ready for &#8220;a good old-fashioned butt-chewing&#8221; on how a gear inspection went last week, said Senior Master Sgt. Tony Grizzard.

Telling Stougard and Rader to step forward, 35th Fighter Wing Vice Commander Col. Mike Bartley said he was concerned the airmen might be spending too much time on the computer.

They looked stunned &#8212; then relieved &#8212; when Bartley told them the real reason for the gathering, just as 35th Services Squadron commander Maj. Tim Sites and Paula Lilly, squadron marketing director, burst into the hangar with a big banner and balloons.

The single 22-year-old from Handley, W.Va., said he doesn&#8217;t know yet whom he&#8217;ll take to Hawaii. The trip pays for round-trip airfare and six days, five nights in the Aloha State.

Pentathlon players earned game pieces by patronizing Services&#8217; organizations and facilities, then entered the numbers from the pieces online to be eligible for prize drawings.

The game, which ended Sept. 30, was open to anyone authorized to use Services&#8217; activities or programs.

PACAF notified wing commanders this week of the 15 prize winners chosen at random throughout the command.

Rader&#8217;s Hawaiian vacation was one of three grand prizes, along with a Harley-Davidson Sportster and a Hawaiian cruise for two.

Other winners in Japan included Senior Airman Vincent Camacho of Yokota Air Base, who collected $1,000 cash, and Christopher Kuchma, a special agent with the Air Force Office of Special Investigations at Misawa, who snagged a pair of watches.

The complete list of winners was not available at press time.

Rader said he logged about 20 to 25 game pieces, mostly from meals eaten at Grissom Dining Hall.

Stougard conceded he played the game hard with an eye toward the Harley.

He said he was happy with the exercise bike, though: When Misawa winter settles in, &#8220;it will be an alternative to going outside.&#8221;