How good is good enough? 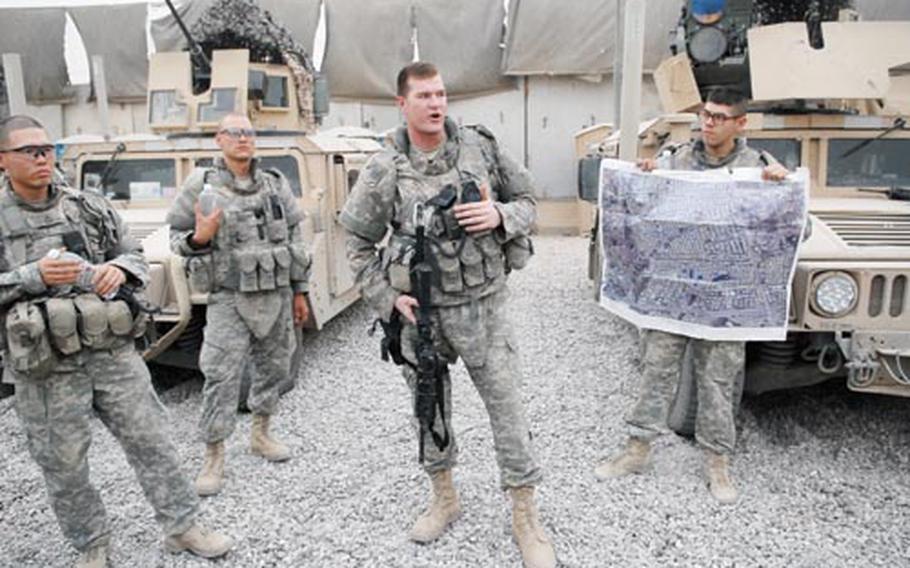 2nd Lt. Jedidiah Wentz, a platoon leader with Troop A, 1st Battalion, 75th Cavalry Regiment, gives a briefing prior to a patrol in the Gazaliyah district of western Baghdad. The troop took over a larger section of the district several months ago after other units in the battalion pushed into Shiite areas to the north. (Michael Gisick / S&S)

2nd Lt. Jedidiah Wentz, a platoon leader with Troop A, 1st Battalion, 75th Cavalry Regiment, gives a briefing prior to a patrol in the Gazaliyah district of western Baghdad. The troop took over a larger section of the district several months ago after other units in the battalion pushed into Shiite areas to the north. (Michael Gisick / S&S) Sgt. Matthew Castine, 23, of Plattsburg, N.Y., watches as a barber tends to a customer in Gazaliyah, a once-prosperous, once-violent district in western Baghdad. During a night patrol through a market, the smell of kebabs wafted over the streets and several soldiers, wearing night vision goggles, stopped for a quick ice cream. (Michael Gisick / S&S)

Their absence stirred concerns. In past years, areas that U.S. units believed they had brought under control often deteriorated quickly after the Americans left. But when Troop A returned to Ghazaliyah in April, things appeared to have gotten better, some members of the unit say.

"The streets were actually cleaner," said 1st Lt. James Lienau, 24, of Green Bay, Wis., a platoon leader in the troop. "They&#8217;d created two new parks. That kind of local initiative was a great thing to see."

The two-week absence was, at most, a very short trial run at self-sufficiency in Ghazaliyah, a once prosperous area racked by sectarian violence during 2006 and early 2007. Still, as last year&#8217;s security gains largely continue to hold up, especially in Sunni areas like this one, the episode highlights a question for American combat troops throughout Iraq: How good is good enough?

Aside from a few warning shots, Troop A, part of 1st Battalion, 75th Cavalry Regiment, hasn&#8217;t fired a single round in Ghazaliyah since it arrived in October. Of the roughly 100 roadside bomb attacks the unit has tracked, only five targeted U.S. patrols, said Capt. Thomas Melton, the troop&#8217;s commander.

And while the lack of reliable electricity and sewage service remain significant concerns, those are problems far too big for Troop A&#8217;s wallet. At this point &#8212; in what the Iraqi government has declared the "year of essential services" &#8212; American officials increasingly see those issues as best left to Baghdad.

While Melton said Iraqi army and police units in the area would likely be able to maintain security even with a much reduced U.S. presence, he cited several issues that need to be resolved first. The largest, he said, is managing the transition of the 750-member Ghazaliyah Guards &#8212; a "Sons of Iraq"-type paramilitary group &#8212; into other jobs.

"Before we can say it&#8217;s good enough, we need to solve that issue," Melton said. "It was a good idea, but now it could be a potential problem."

About 200 members of the group were hired into the Iraqi police this spring, and 500 of the remaining 750 have also been slotted to join the police, though those applications are pending. More problematic, Melton said, will be finding a role for the group&#8217;s leaders, many of whom are former insurgents. The Iraqi security forces won&#8217;t take them, he said, and many have developed influence through the guards program they&#8217;re unlikely to want to give up.

"They agreed to quit the insurgency and see how it goes," Melton said. "But a lot of them are still basically sleeper cells."

Melton said he suspects that some of the roadside bomb attacks are being set by members of the Ghazaliyah Guards in an effort to "justify their continued existence." On one recent night, a small bomb exploded beside an Iraqi army Humvee about 100 meters from a checkpoint manned by the guards, who subsequently said they saw nothing.

The current U.S. contract that pays for the program runs through September, though it could be renewed through January. Melton said he hopes the program can be phased out before then.

"We&#8217;d really like to see that program move on as soon as possible," Melton said. "The [Iraqi army] is at the point that if it (the guards) doesn&#8217;t go away soon, there could be problems. They basically see it as a nuisance."

Officials say the Sunni insurgent groups that purged what had been a mixed neighborhood of nearly all its Shiite residents still linger as a background presence. Roadside bomb attacks spiked in May, though the U.S. unit attributes those attacks to the work of a single bomber who was later captured. More recently, bomb attacks have again increased slightly since a U.S. contract that paid 300 men to pick up trash expired on June 10.

Melton said that could be a coincidence, but military officials have long seen employment programs as a key to luring away young men who might otherwise find work planting bombs. Melton said he is waiting for approval on a new trash contract.

Meanwhile, the Iraqi army has begun handing out eviction notices, giving families who have occupied homes abandoned by fleeing residents six weeks to move out, the first step of a resettlement program that could stoke lingering sectarian tensions.

On Monday, Melton attended a meeting between a local advisory council, an Iraqi army battalion commander and an engineer from the provincial government in Baghdad. The meeting quickly became a loud if relatively cordial forum for the local leaders&#8217; complaints, but the fact that the engineer and the commander showed up at all was seen as a victory.

"It might not look like much," Melton said afterward, "but that was eight months in the making."

A night earlier, an American patrol had visited one of Ghazaliyah&#8217;s markets, which was closing up for the evening. The smell of kebabs wafted through the dark streets from fluorescent-lit shops and several of the soldiers, wearing night vision goggles, stopped for a quick ice cream. An explosion broke the night&#8217;s rhythm, and the patrol checked out the site of a small bomb attack aimed at an Iraqi patrol. A report came in that a man had been found shot to death &#8212; initial indications were that he had been investigating the kidnapping of his son.

On their way back to their base in an occupied mansion, the patrol was stopped by a sobbing woman who said her husband had been badly beaten by "al-Qaida, by these criminals." But after a few questions, it seemed that the beating had followed a long dispute between neighbors.

The Americans had taken the injured man in for medical care, 2nd Lt. Jedidiah Wentz, 23, of Annapolis, Md., told the woman, but that would be the extent of their involvement.

"You need to contact the Iraqi police," he told her. "This is not our jurisdiction."