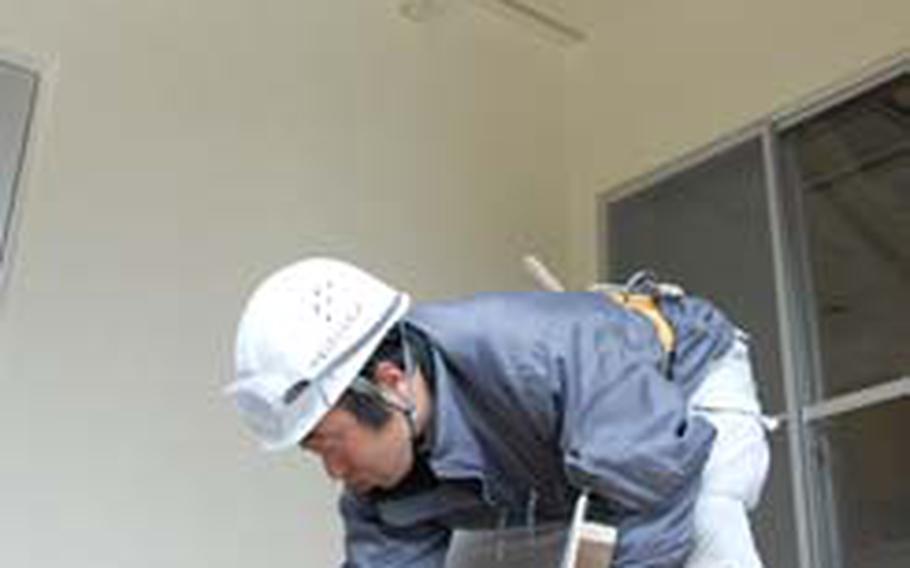 A Japanese worker with Obayashi Construction places outdoor tile in a housing unit on Misawa Air Base, Japan, on Thursday. Officials say the first phase of the multimillion-dollar project will be complete in late May, opening 281 renovated housing units to the base community. (T.D. Flack / S&S)

MISAWA AIR BASE, Japan &#8212; Construction workers are wrapping up the first step of a multimillion-dollar project to upgrade hundreds of base housing units at Misawa.

Debra Warner, a chief of design and construction with the 35th Civil Engineer Squadron, said the $52 million first phase of the Post Acquisition Improvement Program will be complete by the end of May. That means the base soon will have 281 renovated housing units spread across the main and north residential areas.

Warner said the contract, administered through the U.S. Army Corps of Engineers, was awarded in 2006. She said contractor Obayashi Construction started working in January 2007 and has already released some completed units back to base housing.

Housing officials said a handful of families &#8212; including five this month &#8212; have moved into some of the renovated units.

One change residents won&#8217;t find is air conditioning, Warner said. However, if the base ever gets the nod for cooling units, the renovated apartments are wired to support it.

Warner said she was amazed when she walked into one of the renovated units.

"I was taken aback," she said. The work was "really impressive."

Four of the housing units also have been converted to be handicapped-adaptable.

Warner said she thinks those moving into the new units will appreciate the quality-of-life initiative.

The next two phases of the four-phase project are under solicitation now, Warner said. She expects work on those 256 units to begin this summer. And the final phase is still in its initial planning stage, she said.

Renovation breakdown:Housing units under renovation during Phase 1 of the Post Acquisition Improvement Project at Misawa Air Base, Japan: