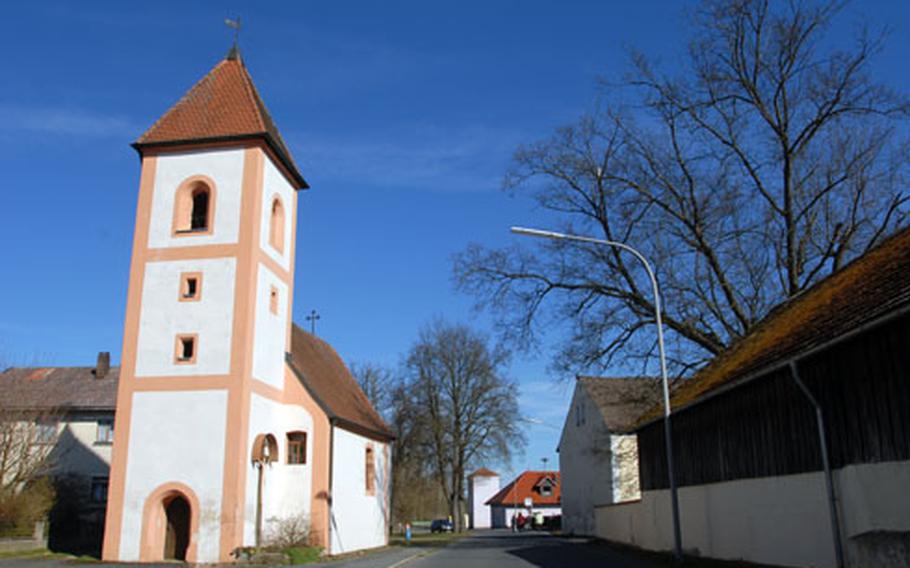 A planned 300-unit off-post housing area for soldiers and their families in Hütten — a small farming village near the Grafenwöhr Training Area — has been put on hold after the company building the homes went out of business. (Photo by Seth Robson/S&S)

The U.S. Army garrison in northern Bavaria has faced chronic housing shortages in recent years as it absorbed thousands of personnel &#8212; including two infantry brigades &#8212; with the closure of other bases in Germany.

Last year, newly arrived military families at Vilseck were stranded for months in hotel rooms due to a housing shortage. This summer, single soldiers at Grafenw&#246;hr were forced to double up in barracks rooms.

Thousands more soldiers and family members are expected in spring 2010 when units from the 172nd Infantry Brigade, which already has two battalions at Grafenw&#246;hr, relocate from Bamberg.

The Army plans to house many of the new arrivals in a 300-unit off-post housing area at H&#252;tton that was due to open next year.

A local company, Firma B&#246;gl based in Neumarkt, has already done a significant amount of work at the H&#252;tton site and could lose millions of dollars if the deal falls through, he said.

City of Grafenw&#246;hr, Bavarian government and U.S. Army Garrison Grafenw&#246;hr officials met Monday to discuss the crisis. On Tuesday, W&#228;chter and U.S. officials traveled to Berlin to ask the German Finance Ministry to back the project, he said.

"The City of Grafenw&#246;hr is in contact with the investor to look at all possibilities for solutions," he said. "Additionally, the City of Grafenw&#246;hr has contacted the German federal government and requested that they look into possibilities to assist the H&#252;tten project with lease guarantees similar to those made for Netzaberg Housing Area."

A total of 830 U.S. military families live at the Netzaberg off-post build-to-lease housing area, which was completed earlier this year.

Susanne Bartsch, U.S. Army Garrison Grafenw&#246;hr public affairs officer, said in an e-mail that the garrison is aware of the financial issue involved in the H&#252;tton project.

"Talks continue between the Bundesanstalt f&#252;r Immobilienaufgaben (German government real estate office)/the Army and the lessor/investor on their efforts to resolve the situation. The Army cannot comment on the ongoing discussions," she wrote.

The Army has no plans to alter its timeline for moving the remainder of the 172nd Infantry Brigade to Grafenw&#246;hr, she said.

"The next soldiers and families are scheduled to arrive here in the spring of 2010," she said. "Any summer &#8217;09 moves would be individual replacements of personnel already here."

The 172nd soldiers and their families will be housed in available government-controlled and private rental housing, she said.