Housing horrors prompt survey of US military quarters across Europe 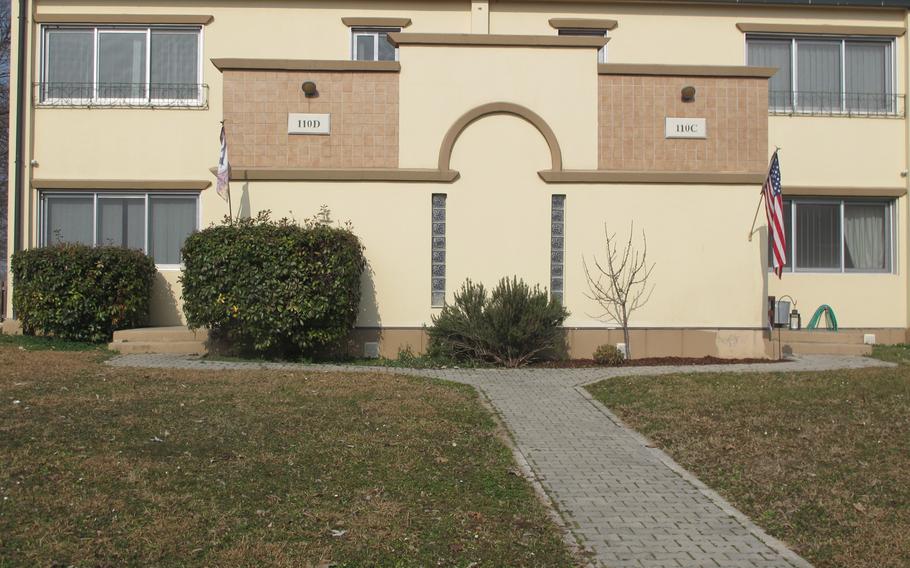 A duplex on Villagio, U.S. Army Garrison Italy's on-base housing, is one of some 800 units commanders have been ordered to visit in the coming weeks to ensure conditions are satisfactory. (Nancy Montgomery/Stars and Stripes)

A duplex on Villagio, U.S. Army Garrison Italy's on-base housing, is one of some 800 units commanders have been ordered to visit in the coming weeks to ensure conditions are satisfactory. (Nancy Montgomery/Stars and Stripes) Apartments inside stairwell housing on Vogelweh, a U.S. Air Force Base in Kaiserslautern, Germany, are among some 1,600 units that will be looked at in the Kaiserslautern area as part of a service-wide review of Air Force family housing. (Jennifer H. Svan/Stars and Stripes)

VICENZA, Italy — Clipboard-wielding military officers will be sweeping through family housing complexes throughout Europe in the next month asking residents about mold, rats, repairs and any other possible problems.

The effort to survey residents about conditions at military-owned and military-leased housing comes after a recent investigative series by Reuters found housing provided to military families at many U.S. bases was dilapidated and dangerous, poisoning young children with lead and mold. The series showed that repeated complaints had gone largely unheeded.

On Friday, Feb. 15, top military officials ordered commanders to inspect all housing for which they were responsible within 30 days and to hold town hall meetings.

“We will hold our chain of command and private contractors accountable to ensure they are meeting their obligations to provide safe, high quality family housing,” Army Secretary Mark T. Esper and Gen. Mark A. Milley, Army chief of staff, said in a joint statement last week.

Twenty two-person teams would canvass base housing areas on Landstuhl, Vogelweh and Ramstein to reach everyone, including Army families, Parker said. Army officials were responsible for checking barracks’ condition, he said.

Three questions would be asked, Parker said: Are you satisfied with the health and safety of your home; Do you have any work requests regarding health and safety of your home that a maintenance team has not addressed to your satisfaction; Do you have any other health or safety concerns with your home. Families may also request an in-person walk-through of their home, Parker said. Families also can answer those same questions on a survey that was emailed out, voiding the need for a site visit if there are no issues, he said.

Commanders have been told to document any health or safety risks in each unit using a standard checklist and to “take any needed immediate action … to ensure the health and safety” of families, according to guidance from top Air Force leaders.

Army officials at U.S. Army Garrison Rheinland-Pfalz have been told to conduct visits to all housing and barracks, but were still awaiting a detailed operational order from the commanding general, said Stefan Alford, a spokesman.

In Vicenza, U.S. Army Garrison Italy was still working out how and when the officers’ visits of some 800 housing units on and off base would be done, said spokesman Jim Brooks.

He said that the top officers in Vicenza, including commanders of U.S. Army Africa and the 173rd Airborne Brigade, could be ringing doorbells as part of the effort.

Army captains would be checking on conditions at some 2,350 rooms in the barracks.

Tenants on Navy bases in Europe, Africa and Southwest Asia are now able to take their complaints to the regional housing director, rather than having their complaints handled only at the installation.

In the past three years, the regional command has implemented a more rigorous review of housing at each base and conducted focus groups to assess how well policies are followed and issues are resolved, said Lt. Tim Pietrack, Navy regional command spokesman.

“Whether our sailors and families live on our installations or on economy housing, they do not resign their right to a safe, clean, and healthy home,” he said.

But the majority of housing overseas — private rentals — will not be checked, officials said.

There are about 1,600 military family housing units in Kaiserslautern but 85 percent of servicemembers with dependents live off base, Parker said.

More than 2,450 servicemembers assigned to Vicenza live in privately-leased houses and apartments, Brooks said. But the military is not responsible for those; local landlords are, he said.

The substandard conditions detailed in the Reuters stories were in privatized military housing — on-base living quarters owned and managed by private companies with 50-year contracts. Privatization on U.S. bases began in 1996 aimed at improving housing quality while reducing costs to the services.

In Europe, however, the services own their on-base housing. The chain of command is also responsible for its leased housing.

It’s not clear what the canvassing in the overseas housing will turn up, although officials said that they expected to find no significant health or safety issues.

“As leaders, we’ve got to keep our mind open that what we find may not match our expectations, but I don’t expect to find anything major,” Parker said of his teams’ review.

After Reuters’ first story documenting that old lead-based paint in housing on U.S. Army bases had poisoned young children, Vicenza officials tested a number of units last autumn and found no problem. That was as expected because most Army-leased housing was new and Italy had banned lead-based paint, which causes cognitive deficits in young children, in 1961. On-base housing built before 1961 had been checked in 1997, according to officials, and 38 “findings” of lead-paint had been fixed.

The Defense Department Inspector General’s office had told the Pentagon three years ago that it had an unsafe housing problem with “pervasive” health and safety deficiencies including electrical and fire hazards, lead-based paint and mold.

The IG recommended stepped-up inspections and increased oversight of privatized housing. The Defense Department declined to do so, citing “unnecessarily increase costs” and “more government intrusion into a private business enterprise.”