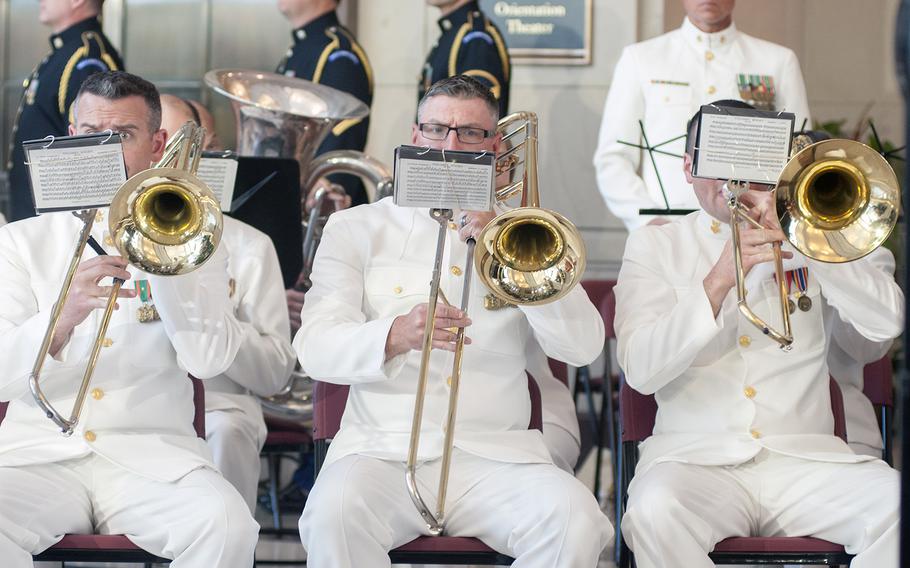 Members of a U.S. military band perform during a ceremony on Capitol Hill in Washington, D.C., on May 20, 2015. (Carlos Bongioanni/Stars and Stripes)

WASHINGTON — The next base Christmas party might not feature any active-duty flutists or tuba players.

The House on Thursday passed legislation sponsored by former A-10 pilot Rep. Martha McSally, R-Ariz., that bars the military from using its many troop bands to entertain at dinners, dances and social events.

It is the latest attempt to cut back the roughly $500 million that the Defense Department spends annually on bands, which date back to the birth of the country’s armed forces but have recently run into criticism as Congress wrangles with tight budgets.

“For every dollar that is spent on our bands to entertain at social functions that’s a dollar we’re not spending on national security and on our troops and our families,” McSally said on the House floor Thursday.

The limits on band performances is now part of the annual $602-billion defense budget and must also be adopted by the Senate before it can become law. That debate will likely continue over the next few months.

Lawmakers have been scraping – and risking a presidential veto – to boost defense spending by about $18 billion during the coming year. The House has proposed using Islamic State war funds for training, facilities and hardware, which means downrange troops will run out of money for the fight in April.

“Yet today, we have 99 different Army bands,” she said. “In fact, today these bands will play at 22 different shows worldwide.”

The other service branches also have bands and, in fiscal year 2015, the Defense Department spent a total of $437 million on musicians, instruments, uniforms and travel expenses, McSally said. It could be shelling out as much as $11,000 for flutes, $12,000 for tubas, and $88,000 pianos.

Bands often play an important role in military life and are believed to lift the morale of troops. They also act as emissaries who play to surrounding communities in the United States and abroad.

The military has recognized the pressure to reduce the costs of musical entertainment.

The Air Force canceled the 2016 season of its Tops in Blue entertainment program due to budget concerns and a lack of interest. The traveling troupe of active-duty airmen take up to a year off from their military jobs to perform music for troops and families at bases around the world.

Earlier this year, the Army cancelled the Soldier Show, its version of the Tops in Blue, to put the money into troops and warfighting.

The House bill could hit the more conventional military bands stationed with commands at bases around the world by limiting their ability to play at social events on base and in the community.

“The bands play an important role playing during ceremonies recognizing the sacrifices of the fallen but they are not appropriate at every event,” said Rep. Rodney Frelinghuysen, R-N.J., who supported the McSally legislation.