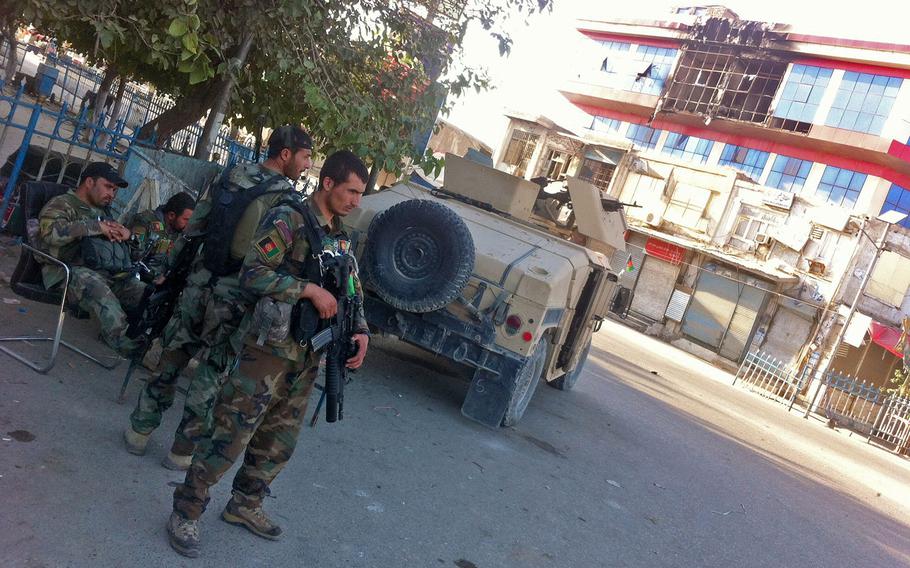 Buy Photo
Afghan army soldiers secure a traffic circle in front of a building damaged by fighting in Kunduz city on Oct. 7, 2015. After more than a week of fighting, Afghan forces controlled some neighborhoods but continued operations to clear other areas of Taliban fighters. (Josh Smith/Stars and Stripes)

Buy Photo
Afghan army soldiers secure a traffic circle in front of a building damaged by fighting in Kunduz city on Oct. 7, 2015. After more than a week of fighting, Afghan forces controlled some neighborhoods but continued operations to clear other areas of Taliban fighters. (Josh Smith/Stars and Stripes) 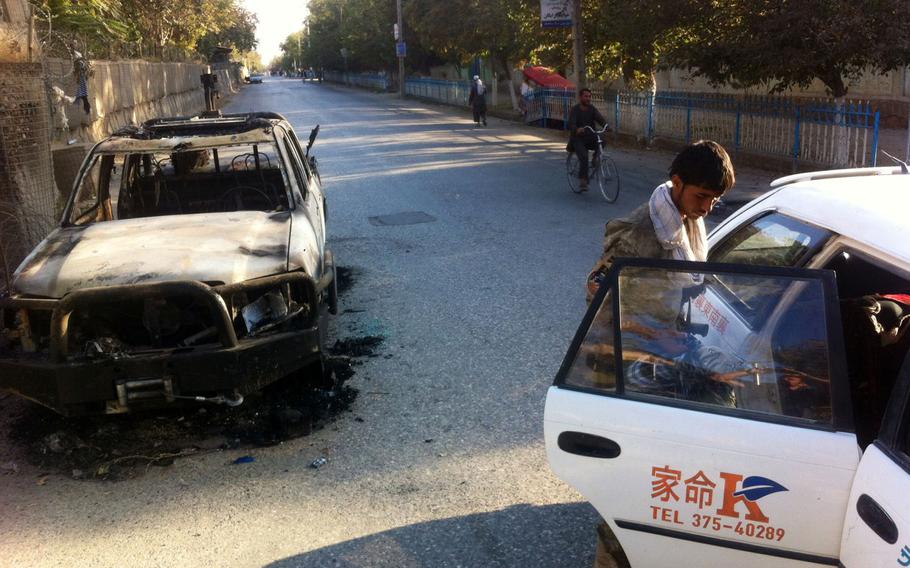 An Afghan policeman searches a car at a checkpoint next to a burned-out army truck in Kunduz city, Wednesday, Oct. 7, 2015. Afghan forces continued efforts to push out remaining Taliban insurgents after an offensive by the militant group at the end of last month. (Josh Smith/Stripes) 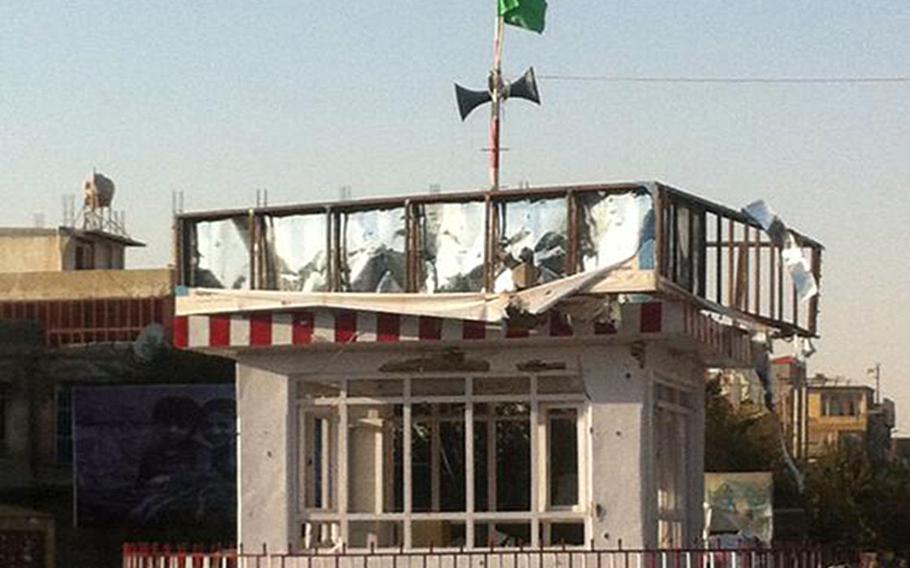 Buy Photo
An Afghan flag flies over the main square in Kunduz city, Wednesday, Oct. 7, 2015. The Afghan army here is weary of media fixation on the flags. (Josh Smith/Stars and Stripes)

KUNDUZ, Afghanistan — Police and soldiers lined key intersections and manned checkpoints in Kunduz city Wednesday, but few civilians ventured into the glass-strewn streets after more than a week of sometimes fierce fighting to reclaim the city from Taliban insurgents.

Many shops and houses appeared damaged by bullet strikes, with a few burned-out vehicles left in the streets, which were littered with broken glass from shop windows. Among the abandoned vehicles in the middle of one road was a shiny new city fire engine, riddled with bullet holes.

The government, backed by U.S. special operations forces and airstrikes, launched an offensive Thursday to retake the city from insurgents who overran it in a surprise, complex strike three days earlier. Since, then, control of the central square has repeatedly changed hands, with each side tearing down the other’s flag and hoisting its own. On Wednesday, the government flag was flying over the main square.

A large poster of Taliban nemesis Ahmed Shah Massoud, Afghanistan’s national hero, had been torn down and vandalized, the eyes gouged out. Massoud led resistance against the Taliban for years until he was assassinated by al-Qaida on Sept. 9, 2001, two days before the 9/11 terrorist attacks.

Power was out in many parts of the city, with some entrepreneurs setting up mobile phone-charging stations connected to generators. Residents described a worsening humanitarian situation, especially after most aid organizations were forced to pull out.

“We are already in a nightmare; people started dying of hunger and health problems,” said resident Gul Mohammad.

Near the airport, a few miles south of the city, rocket batteries fired at suspected Taliban positions across the Kunduz River to the west.

In Kabul, a spokesman for Ghani said some “scattered elements of the enemy” remained in residential areas of Kunduz as operations continued to clear the Taliban from the city, The Associated Press reported.

Both security forces and residents described a lightning Taliban offensive on Sept. 28 that met with very little initial resistance from government forces.

By the time troops pushed back into the city of 300,000, Taliban fighters had taken up positions in houses and other buildings. Sherzaman, a 40-year-old militia fighter, said he was wounded in one effort to dislodge two Taliban gunmen from the upper floor of a construction company building. When the militia tried to run up the stairs, Sherzaman was shot in the leg. The enraged militia fighters then doused the building in gasoline, set it on fire and burned the two Taliban to death.

At the headquarters of the Afghan army’s 2nd Brigade, 209th Corps, south of the city, it was apparent that American and coalition advisers remain at the center of government efforts to retake the strategically important city. Troops from the U.S., Germany, the Netherlands and the United Kingdom mixed with Afghan soldiers and police.

The base, which lies just south of the airport that became a government stronghold when the Taliban occupied the city on Sept. 28, is teeming with regular army advisers and special forces soldiers. Afghan military casualties evacuated by helicopter were being transported to an Afghan base in Mazar-e-Sharif, the largest city in northern Afghanistan.

Among the U.S. advisers were troops from the 10th Mountain Division, including Col. Paul Sarat, who commands the coalition’s northern training and advising command.

But it’s the special forces troops who are at the heart of the fighting.

They are also at the center of a controversy over the airstrike last week that killed 22 medical staff and patients at a hospital in the city run by the Doctors Without Borders medical volunteer group. It has been reported that American special operations forces may have been involved in calling in the strike by an AC-130 gunship.

Doctors Without Borders — also known by the group’s French acronym, MSF — has said it believes the bombing was a war crime. The politically influential group is also calling for an independent probe by an international investigative commission.

U.S. officials say they are investigating, but the top U.S. commander in Afghanistan, Gen. John Campbell, believes the troops involved may not have followed the rules of engagement, The New York Times reported Wednesday, citing unnamed officials.

A contingent of the elite special forces soldiers has been based permanently at Kunduz airport for about five months, since the Taliban made their first major push on the city, which was unsuccessful.

Nestled among barracks housing Afghan commandos, the special forces compound gives indications that the troops here are involved in more than classroom instruction.

Afghan commandos say they are conducting operations nearly every night, especially near the old Bala Hisar fortress, which overlooks the town.

Despite the declared end of the U.S. combat mission in Afghanistan at the end of last year, Americans have been drawn back into the fighting as the Taliban have made gains during their summer offensive.

U.S. airstrikes were said to have been key to preventing the Taliban from overrunning Kunduz airport, and many Afghan troops here bemoan the fact that there have been no more in the area since the hospital strike early Saturday.

Afghan aircraft have continued airstrikes, however, as government troops continue to struggle to fully clear the city of Taliban resistance.