House panel: US missed chances to head off Islamic State 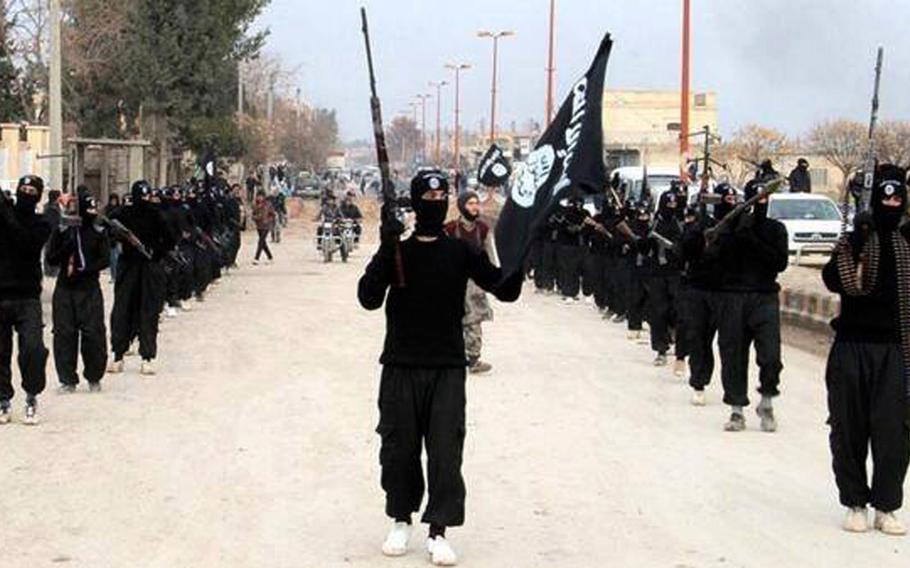 This undated file image posted on a militant website on Tuesday, Jan. 14, 2014, which has been verified and is consistent with other AP reporting, shows fighters from the al-Qaida linked Islamic State of Iraq and the Levant (ISIL) marching in Raqqa, Syria. (Militant Website)

WASHINGTON — The Obama administration missed key opportunities over the past six months to beat back the Islamic State assault on Iraq with targeted drone strikes, lawmakers on the House Foreign Affairs Committee said Wednesday.

Rep. Ed Royce, R-Calif., committee chairman, said he and others in the State Department urged U.S. strikes on the al-Qaida splinter group as it gathered in Iraq’s western desert earlier this year before seizing many major cities, but he said the administration apparently rejected the requests.

The Islamic State successes, first in Syria and now in Iraq, have left the group flush with cash, weapons, territory and fighters, and caused widespread concern of a new Islamist safe haven that could be used to stage terrorist attacks against the United States.

The U.S. has ramped up intelligence gathering, military advising and diplomatic efforts within Iraq over the past two months as the group took much of the north and threatened the capital, Baghdad.

Royce said the Obama administration warned House lawmakers six months ago that the Islamic State, which marches under the black al-Qaida flag, was gathering in easily identifiable columns in the west while officials were warning that the group could threatened the rest of the country.

“Since that last hearing, [the Islamic State] has done ... precisely what the administration predicted it would, it has taken over most of western Iraq,” he said. “But again, no drone strikes against those columns.”

Any such drone strikes would need to have been done after consultation with Iraq’s government, however. It was June 18 when Gen. Martin Dempsey, chairman of the Joint Chiefs of Staff, told lawmakers that Iraqi Prime Minister Nouri al-Maliki had formally requested U.S. airstrikes.

Instead, Royce said, the Iraqi security forces were left to their own against the invading forces, which had swelled with jihadis and been battle-hardened in the neighboring Syrian civil war.

He said Iraqi forces were ill-equipped to deal with the threat and had attempted to attack with U.S. Hellfire missiles mounted on Cessna propellor airplanes.

The situation has since spun out of control, Royce said, destabilizing the region and undermining the security of the United States.

Brett McGurk, deputy assistant secretary for Iraq and Iran in the State Department Bureau of Near Eastern Affairs, testified that the Iraqi government did not request U.S. air support until May and that the administration has tried to support the country in providing its own security.

“We wanted to enable local actors to secure their sovereign space as best they can,” McGurk said.

He said the U.S. had helped the Iraqi security forces “jerry-rig” missile systems to attack militants, and that those weapons had been effective at times.

Furthermore, the Obama administration has not rejected airstrikes but intelligence on the situation on the ground in Iraq had been patchy and has made any targeted attacks difficult, McGurk said.

“There is a significant risk, Mr. Chairman, of taking any military action without that level of granularity,” he said.

The U.S. has now drastically increased intelligence gathering flights over Iraq — 50 sorties per day versus one per month in the past — and the security picture is becoming clearer, said Elissa Slotkin, who was acting as the principal deputy under secretary of defense for policy for the Department of Defense.

Hundreds of military advisers have also been sent to assist the Baghdad government, and U.S. warships have moved into the Arabian Gulf, she said.

Officials hope to foster a federalist-style government that can pull together the disparate religious and ethnic groups in Iraq and provide national security, especially at Iraq’s borders, she said.

“The situation on the ground … is extremely complex and fluid,” Slotkin said. “I want to be clear — there will not be an exclusively military solution to [the Islamic State]. The Iraqis must do the heavy lifting.”