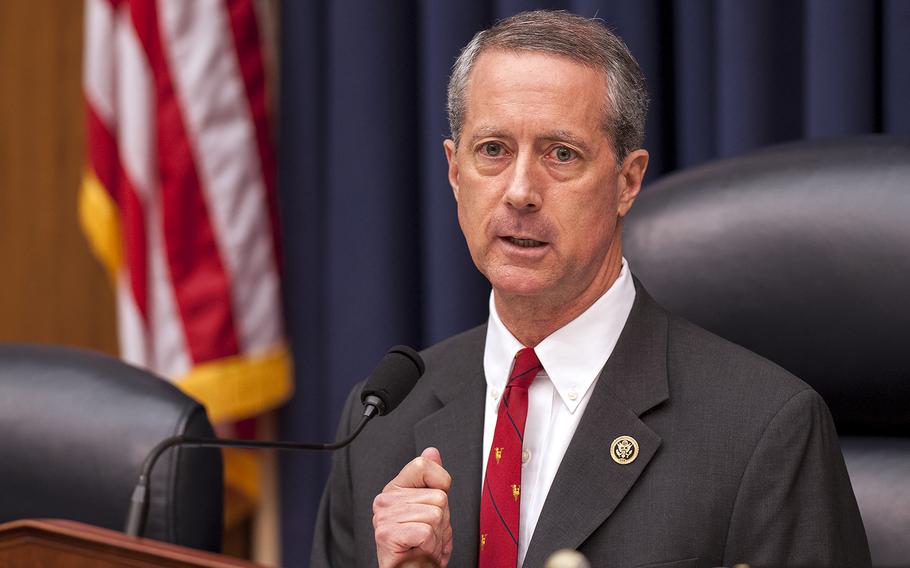 Rep. Mac Thornberry, R-Texas, chairman of the House Committee on Armed Services, speaks during a hearing Wednesday, April 27, 2016, addressing the National Defense Authorization Act policy bill. On Thursday, the committee approved taking $18 billion from funds slated to fund the war against Islamic State and to use that money to pay for more troops, military training and equipment. (Carlos Bongioanni/Stars and Stripes)

WASHINGTON – Despite Pentagon objections, the House Armed Services Committee on Thursday approved a plan to take $18 billion out of the Islamic State war budget in 2017 and instead pay for more soldiers, military training and equipment.

The Republican-led panel voted overwhelmingly 60-2 to make that tradeoff part of the $610-billion National Defense Authorization Act policy bill and the foundation of the coming year’s defense budget, a move that could throw the Iraq and Syria war into financial uncertainty. Defense Secretary Ash Carter called the budget maneuver “deeply troubling and flawed” and a “gamble” that could lead to downrange troops running out of money next spring.

Defense hawks in the House are pushing ahead with the high-risk and potentially high-reward budget tactic, hoping they can skirt caps on defense spending now and bolster the military, while forcing the next president to work out a deal with Congress to provide money to continue the war next year.

“This year something is going to be shortchanged,” said Rep. Mac Thornberry, R-Texas, chairman of the Armed Services panel. “But the bottom line for me this year is that it is fundamentally wrong to send servicemembers out on missions for which they are not fully prepared and fully supported.”

A similar GOP tactic resulted in a rare presidential veto the defense budget in October and Thornberry has said he would not be surprised if President Barack Obama threatens another veto.

The chairman and his counterpart on the Senate Armed Services Committee, Sen. John McCain, R-Ariz., have argued the military is suffering and might not be prepared to fight as federal budget caps and the end of major wartime operations in Afghanistan and Iraq have led to reduced spending. The Senate will hash out its version of the defense policy bill in May.

Shortfalls in money, troops and equipment are coming just as threats around the world, including Russia, the Islamic State, North Korea, Iran and China, are ramping up, according to Thornberry.

“For that reason, I think that it is essential that we begin to correct the funding shortfalls that have led to a lack of readiness and to a heightened sense of risk that we have heard about in our hearings and that we have seen firsthand,” he said.

Along with boosts in training and equipment, the bill blocks the Army’s plan to cut 15,000 soldiers over the coming year and instead adds 5,000 more to the current end strength. The Marine Corps would increase by 3,000 and the Air Force would increase by 4,000 over what those services have planned.

The bill also includes perks and reforms for servicemembers and their families, including a 2.1 percent pay hike after years of Obama opting to keep raises below private sector increases.

Commissaries would also see a variety of reforms after years of political pressure to drastically cut their funding. Instead of slashing funding, the House plan, spearheaded by Rep. Joe Heck, R-Nev., allows grocery pricing to vary depending on costs outside base gates and commissaries to sell their own branded products.

Overall, $18 billion in additional defense spending will come out of an overseas war fund, called Overseas Contingency Operations, which pays for the ongoing war against Islamic State militants in Iraq and Syria, as well as counter-terrorism operations in Afghanistan and elsewhere.

Thornberry’s dip into the fund means it will only cover war operations for about six months of 2017 instead of the full year.

As the House debated, Carter warned against the plan during testimony before the Senate Wednesday.

“It’s gambling with warfighting money at a time of war — proposing to cut off our troops’ funding in places like Afghanistan, Iraq and Syria in the middle of the year,” he said.

Democrats who reluctantly voted for the NDAA bill also raised the alarm bell, saying it could result in a budgetary train wreck.

Rep. Adam Smith, D-Wash., said the need to approve more money for the Islamic State war will come due just as Congress is facing the return of sequestration, a series of much deeper across-the-board federal budget cuts mandated by the 2011 Budget Control Act.

Lawmakers have struggled with sequestration since it was pushed through Congress by fiscal conservatives and have made short-term agreements to put off the cuts -- often at the last moment and amid nail-biting brinksmanship. But most agree that a political agreement to repeal the cuts is not currently possible.

The Islamic State war could be pulled into the political logjam over sequestration next year, Smith said.

“We continue to hope the money will appear and this time this bill is placing a very high stakes gamble. Will there be the votes in Congress in April to overturn the Budget Control Act?” he said. “If there aren’t, we’re going to have troops committed in Iraq and Afghanistan who are going to suddenly run out of money.”