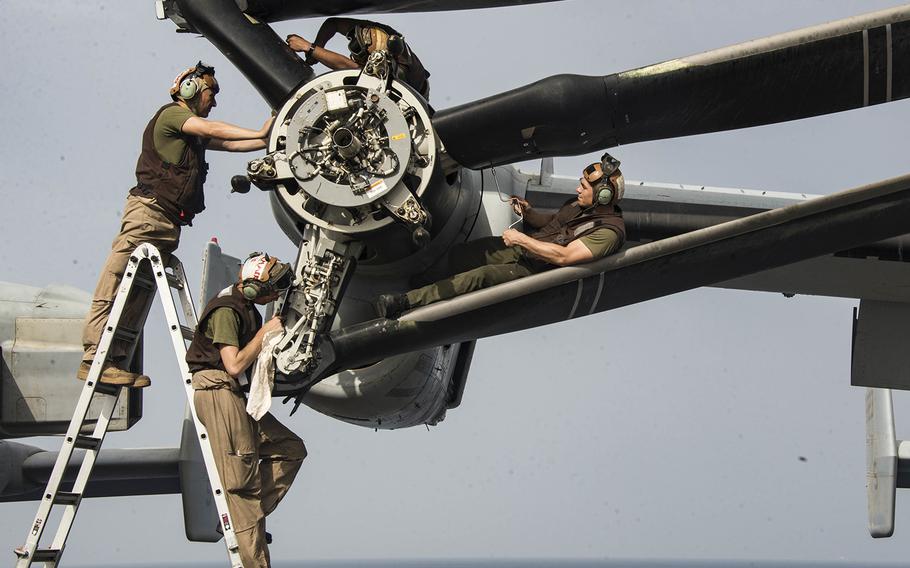 U.S. Marines assigned to the 26th Marine Expeditionary Unit perform maintenance on an MV-22 Osprey tiltrotor aircraft on the flight deck aboard the Wasp-class amphibious assault ship USS Iwo Jima on May 7, 2018. (Dominick A. Cremeans/U.S. Navy)

WASHINGTON — The House Armed Services Committee on Wednesday approved a plan to create an independent National Commission on Military Aviation Safety in the wake of a series of deadly aircraft crashes in the past year.

The commission would review military aviation mishaps from 2013 and 2018, compare trends to historical data, assess causes fueling the crashes and make recommendations on safety, training, maintenance, personnel and other policies related to military aviation safety.

The plan’s author, Rep. Adam Smith, D-Wash., said Wednesday during a House Armed Services Committee hearing that a series of factors could be contributing to the crashes, not just budget cuts.

“This is becoming a very large problem and it’s costing the lives of the men and women serving us,” said Smith, the ranking Democrat on the committee. “I don’t think it’s just the money. The money is certainly part of it …I want to figure out the entire picture, get every answer we can to make sure that we are creating the safest possible environment in our armed services.”

The discussion was part of a marathon “markups” hearing to approve a first draft of the 2019 National Defense Authorization Act, or NDAA, which directs policy and spending plans for the Defense Department. The hearing was slated to go late into Wednesday evening with about 400 amendments under consideration for the next NDAA, or H.R. 5515.

Smith also said the Navy’s reports on the deadly crashes of the USS Fitzgerald and the USS John S. McCain were reminders that Congress can direct more effort to get to the bottom of such incidents.

“I don’t think all of us are 100 percent satisfied with what the Navy came back with us on the accidents that happened with the ships,” Smith told the committee. “I want to make sure we have an independent commission that really looks at this.”

On Friday, Rep. Mac Thornberry, R-Texas, chairman of the House Armed Services Committee, proposed $639.1 billion in a military base budget, in addition to another $69 billion for a war chest called the Overseas Contingency Fund. It followed plans unveiled a week earlier by several House panels that laid out the first wave of spending proposals and policies for the next NDAA.

Thornberry also lauded Smith’s plan on Wednesday in light of a refusal on the part of Pentagon officials to concede they are seeing a crisis in aviation crashes.

“It’s disturbing to me that there are some people in the Pentagon who even today say it’s not really a crisis,” he said. “Each of these (crashes) has underlying causes. We still have work to do.”

Thornberry said some of the responsibility falls on the shoulders of Congress with defense cuts in recent years, but other factors such as oxygen-related failures could be contributing to the crashes.

In recent weeks, the House Armed Services Committee, its subpanels and its Senate counterparts have held dozens of hearings to discuss the 2019 priorities for each of the branches as well as a wide-ranging list of challenges facing the military.

Smith’s effort for an aviation safety commission comes on the heels of a crash last week of an Air Force C-130 Hercules used by the Puerto Rico Air National Guard. The cargo plane crashed in Savannah, Ga., killing all nine Guard members on board.

It was the latest in a long string of aircraft crashes. In the last month, at least seven military aircraft have crashed, leaving 16 servicemembers dead.

Despite the string of fatal crashes that have spanned all four branches of the military, Defense Department officials have rejected claims of an emergency.

“This is not a crisis,” Pentagon Press Secretary Dana White said last week.

Smith concedes a lack of readiness funding might play a role in the crashes, but he hopes the commission can get to the bottom of all the contributing factors.

“Readiness typically is the last person in line at an inadequately stocked buffet,” he said. “And that’s a huge problem.”