'House of Cards' actress and others to perform Kaiserslautern theater workshop 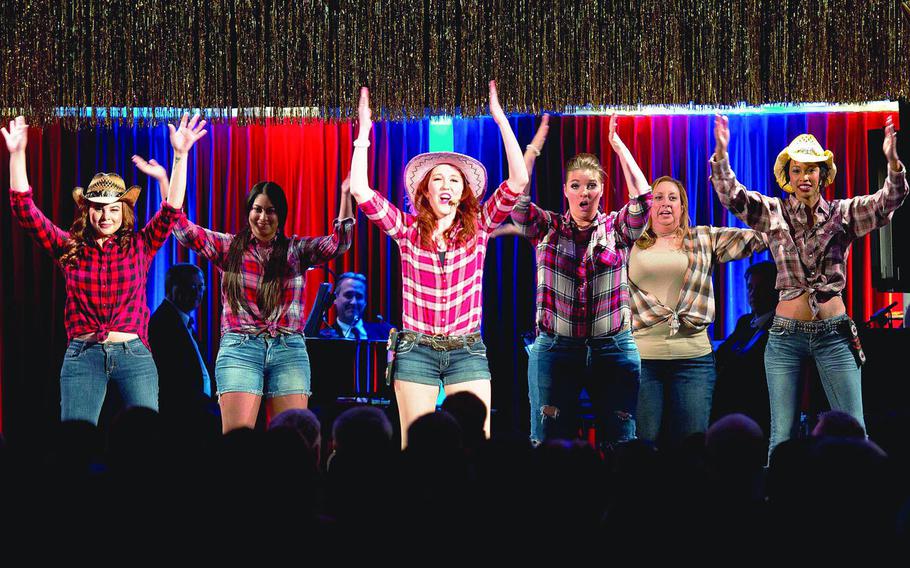 The Grafenwoehr Performing Arts Center cast of ''Dirty Rotten Scoundrels'' performs during the Toppers awards in Kaiserslautern, Germany, in 2016. Theater lovers in the Kaiserslautern Military Community can participate in various workshops and see a showcase performance during the Army's annual theater festival in Europe during Columbus Day weekend next month. ()

KAISERSLAUTERN, Germany — A guest performance by Adam Driver’s Arts in the Armed Forces theater troupe is the showcase act during the Army in Europe’s theater festival next month in Kaiserslautern.

The One Page Play Festival and Theater Skills Workshop runs from Oct. 6 to 8 at KMC Onstage in Kaiserslautern. It includes writing and acting workshops open to the public.

The capstone of the Columbus Day weekend is a guest performance by the professional actor group formed in 2009 by Driver, a former Marine known for his roles in the “Star Wars” franchise and HBO’s “Girls” series.

Winters said Driver couldn’t attend because he’s filming for the next Star Wars movie in London. Driver was part of the last group that came to Germany in 2013, performing at Grafenwoehr and Landstuhl.

The cast coming to Kaiserslautern includes Rachel Brosnahan, who had a recurring role as former prostitute Rachel Posner on the first three seasons of “House of Cards,” and Gideon Glick, Darren Goldstein and Grantham Coleman.

The actors will perform a free stage reading of the adult drama “Lobby Hero,” on Oct. 7 at KMC Onstage on Kleber Kaserne.

Other festival events include a monologue competition, an improvisational open mic night, and workshops on play writing and improving vocal technique.

A professional choreographer will lead a stage combat workshop, in which participants will learn how to re-create violence on stage without hurting anyone, Winters said. The play-writing workshop gives participants the chance to write a one-act play. The plays will be presented and prizes awarded for best scripts.

The workshops are taught by theater professionals from the U.S. and Germany, Winters said.

Driver’s troupe performs at U.S. military bases around the world.

A former infantryman, Driver has said he found similarities between the military and theater communities, such as the self-discipline and the group effort to accomplish a mission.

“It’s not about you; you have a role,” he said in a TED Talk last year. “I thought how great would it be to create a space that combined these two seemingly dissimilar communities” and brought entertainment more thought-provoking than “the typical mandatory fun events I remember being ‘voluntold’ to go to in the military,” such as meeting NFL cheerleaders, he said.

Moritz von Stuelpnagel, who was nominated for a Tony Award for his work in “Hand to God,” will direct the production.

The play, written by Academy Award-winner Kenneth Lonergan, is about a young security guard, his strict boss and an overbearing cop and his rookie female partner. It’s set in a Manhattan apartment building in the middle of the night.

“It’s a very intense, adult drama,” Winters said. “We’re saying it’s not suitable for under 18 years of age” due to mature themes and language.

Immediately following the show, the actors will answer questions from the audience.

The show is free and seats are unreserved.