House lawmakers pursue end to US military role in Yemen 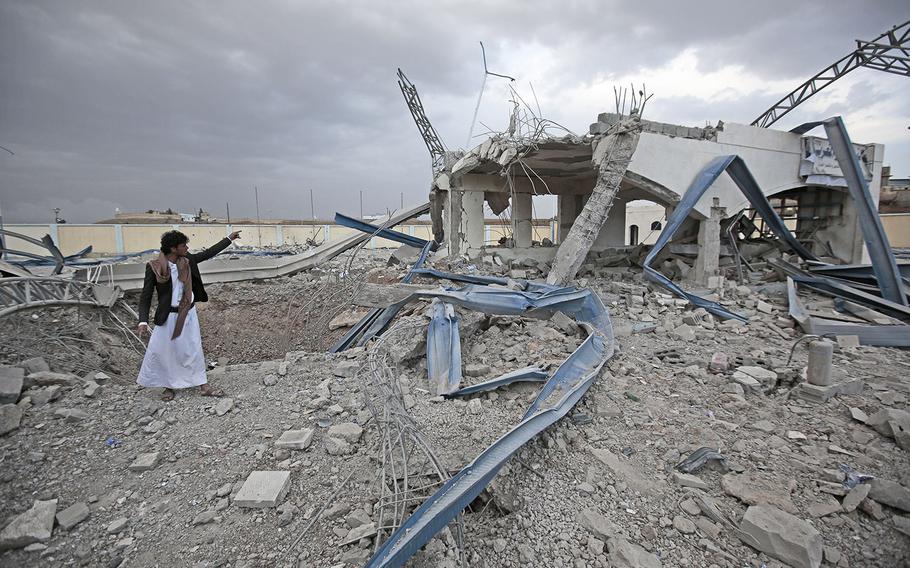 A Yemeni man inspects a destroyed petrol station after it was targeted by Saudi-led airstrikes on the outskirts of Sanaa in May 2018. (Hani Al-Ansi, DPA/Zuma Press/TNS)

Rep. Adam Smith, D-Wash., ranking Democrat on the House Armed Services Committee, joined more than a dozen of his colleagues, including Reps. Ro Khanna, D-Calif. and Mark Pocan, D-Wisc., in their call to withdraw U.S. armed forces from engaging in the fight between the Saudi Arabia-backed government forces and the Iran-backed Houthi rebels in Yemen, the lawmakers said Wednesday.

“Yemen is facing the worst humanitarian crisis in the world right now that has been significantly exacerbated by the civil war. The impact of the Saudi-coalition’s actions on the dire humanitarian crisis is undeniable,” Smith said in a statement with the lawmakers. “The U.S. should be aggressively pushing a peaceful solution to end this civil war instead of supporting the Saudi-led coalition military campaign that has only destabilized the crisis further. We must make it clear that the U.S. should not be choosing sides in this civil war while the people of Yemen continue to suffer.”

U.S. forces have provided support for Saudi-led forces in their fight against the Houthis, which some lawmakers contend the military has not been given proper authority to do. The forces have assisted in coordinating, refueling and providing targeting guidance and intelligence to the Saudi-led coalition in Yemen.

In November, House members approved a resolution that declared the Yemen effort unauthorized.

In March, the Senate voted down a measure by a bipartisan group of senators calling for the end of the U.S. military role in Yemen in a 55 to 44 vote. Sens. Bernie Sanders, I-Vt., Mike Lee, R-Utah, and Chris Murphy, D-Conn., introduced the resolution to force a vote on the matter for the first time.

On Sept. 5, Smith, Khanna and others said they would move forward with plans to introduce a new war powers resolution to withdraw U.S. forces from the war in Yemen. The plan has since gained additional sponsors, including Massie and Jones.

The moves are also part of a wave of concern over what some lawmakers contend is outdated authority for the president to use military force, or AUMF. But efforts to repeal the existing war powers have faced plenty of opposition, including from President Donald Trump’s administration.

“When I introduced a similar war powers resolution last year, I, along with Reps. Pocan, Massie, and Jones, were among a small group of members of Congress calling for an end to the U.S. involvement in the Saudi war in Yemen,” Khanna said Wednesday. “One year later, the bloodshed continues with widespread destruction and disease contributing to the world’s worst humanitarian crisis. U.S.-fueled planes continue to drop U.S.-made bombs on innocent victims. This time around, our coalition to end the war has expanded and the call for withdrawing U.S. involvement is louder.”

“The world’s worst humanitarian crisis has been triggered by our secretive, illegal war in Yemen waged alongside the Saudi regime,” Pocan said. “As the Saudis use famine as a weapon of war, starving millions of innocent Yemenis to near death, the United States fuels, coordinates and provides bombs for Saudi airstrikes, and secretly deploys the military to participate in on-the-ground operations with Saudi troops.”

Earlier this year, the Pentagon defended its efforts in Yemen.

“Our mission is two parts, it’s counterterrorism, which we feel we have the authority to conduct that mission under our current AUMF,” Pentagon spokeswoman Dana White said. The other mission is supporting Saudi Arabia, which “has been attacked in Yemen by Iran-backed Houthis who have fired missiles and targeted civilian facilities.”

The current war powers were issued in response to the 9/11 terrorist attacks in 2001 and 2002 when the United States went to war in Afghanistan and Iraq. The AUMFs gave the president wide-ranging authority to direct the military to fight terrorist groups such as al-Qaida, the Taliban and Islamic State around the world.

Since that time, the military has operated under those war powers in more than a dozen countries.

In 2015, former President Barack Obama’s administration deployed U.S. forces to provide logistical and intelligence support to the Saudi coalition in Yemen, which continues to this day, lawmakers have said.

At the end of his presidency, Obama approved a raid on an al-Qaida compound in Yemen’s Al Bayda province. But it didn’t take place until the first month into Trump’s administration. The deadly encounter left a Navy SEAL dead and killed an estimated two dozen civilians.