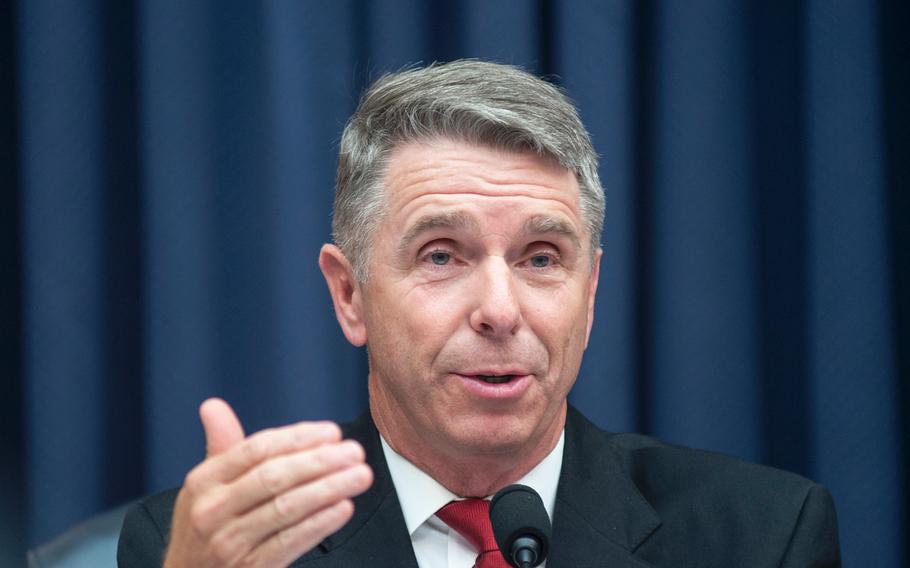 WASHINGTON – Leaders of a House Armed Services Committee subpanel on Tuesday railed against a Navy budget that they say falls short of critical ship and submarine plans.

Rep. Rob Wittman, R-Va., chairman of the committee’s subpanel on seapower and projection forces, said the 2019 budget proposal fails to meet benchmarks needed to reach a 30-year goal of 355 ships.

“Critical shortfalls in aircraft carriers, large-deck [amphibious ships] and attack submarines are debilitating to our national security and only serve to embolden potential adversaries,” Wittman told a group of Navy and Marine Corps officials. “The Navy sometimes misses the strategic imperative and national urgency associated with the message our nation needs to sends to the world when an inadequate shipbuilding budget is proposed.”

Wittman said the current shipbuilding plan, which directs for 342 ships by 2039, fails to send a message of resolve to U.S. adversaries. The plan falls short of the Navy’s new force structure assessment report, which was released in December 2016, he added.

Wittman said the plan also falls short on an annual basis, proposing $21 billion for 10 ships. Instead, it should be $26.2 billion for 13 ships, he said.

“Shipbuilding is a sign of our nation’s resolve, and a weak shipbuilding request is carefully watched by our adversaries,” Wittman said. “We need to significantly improve our Navy’s shipbuilding.”

The comments will likely play into the development of the 2019 National Defense Authorization Act, which directs policy and spending plans for the Defense Department. But whether additional funding is directed to additional ships and submarines remains to be seen.

Last month, the Pentagon released a 2019 budget plan seeking a 10 percent hike in funding to $686.1 billion to increase the size and might of the military, primarily in response to China and Russia’s growing capabilities.

Lawmakers have yet to appropriate money for the 2018 and 2019 fiscal years, and will hit a critical funding deadline March 23 for those plans.

“Coming out of an era of shrinking resources and increasing operations that drove exceedingly difficult choices, we feel your efforts to put us on a course for readiness recovery and growing the fleet were substantial and significant. Thank you,” said James Geurts, assistant secretary of the Navy.

The Navy’s 2019 budget proposes 54 battle force ships during the next five years, which is 11 more than planned in the budget a year earlier. But still, it doesn’t reach 355 ships until 2048, said Rep. Joe Courtney, D-Conn., the ranking Democrat of the subpanel.

The “budget request for seapower represents a move in the right direction,” he said. “[But] this budget does not achieve the minimum Navy force size the Navy says it needs until the 2050s.”

Another glaring missed opportunity in the budget proposal, Courtney said: plans for the undersea fleet.

While the budget directs for construction of two Virginia class submarines each year, it still would not achieve a 66-boat fleet called for in the force structure assessment until 2048.

The Navy should look at construction of three new submarines each year, Courtney said. He noted there are ongoing negotiations “right now between the Navy and industry” to reach that goal.

Congress has already authorized the bump to construction for three submarines each year, Courtney noted.

“Achieving a larger fleet will take more than any one budget year, and it will take more than just building new ships,” he said. “We need to take a comprehensive approach that includes new construction, extension and modernization of existing ships, repairing our ships on time and without delay, and incorporating new capabilities into current and future ships wherever possible.”