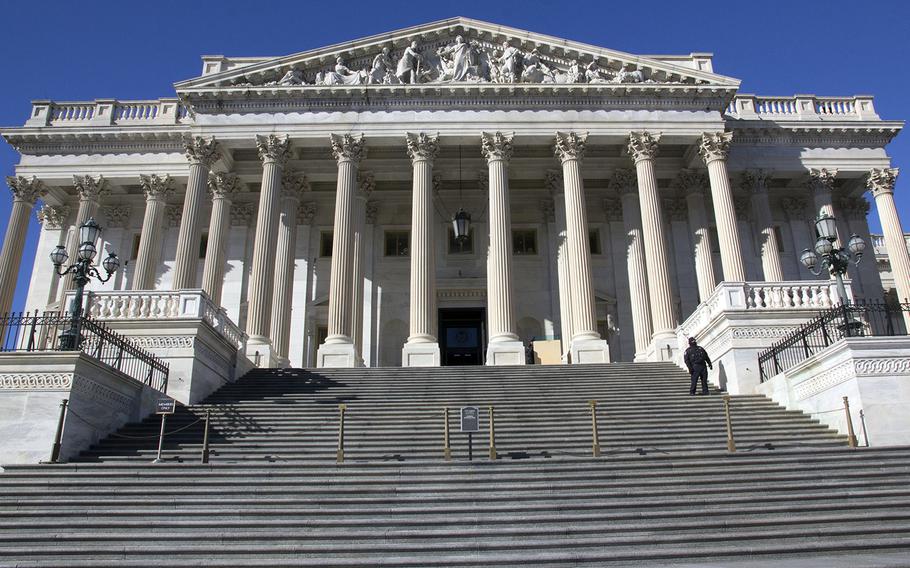 WASHINGTON — Fiscal hawks in the House on Tuesday proposed pumping billions into the military’s emergency overseas war fund as a way to circumvent a mandatory limit on base defense spending that the services warn will damage national security and readiness.

The proposal by the House Budget Committee, which is chaired by a Tea Party conservative, would stick to the $523 billion base-budget cap for fiscal 2016 but add $94 billion into the overseas contingency operations fund, which has been derided as a slush fund by critics.

The armed service committees in both chambers of Congress had already proposed blowing the caps by increasing the base budget to $577 billion plus $50.9 billion for the war fund. But defense hawks such as Sen. John McCain, R-Ariz., and Rep. Mac Thornberry, R-Texas, struggled to find a legislative solution that could satisfy the fiscal conservatives in their party.

Rep. Tom Price, R-Ga., who chairs the House Budget Committee called the higher base budget proposed by Obama and others in the GOP irresponsible, and said it would set the country on the road to more dramatic cuts to the military spending in the future.

“To avoid such a reckless and harmful scenario, our budget obeys current law,” according to a summary released by the committee. “It avoids an across-the-board sequester cut that would indiscriminately slash funding for our military and their families, and it puts in motion a concerted effort to increase resources for our national defense this calendar year.”

The senator has held a series of SASC hearings underscoring the need to lift the cap, and said Monday he was working with other lawmakers on an increase to the defense budget above President Barack Obama’s budget, which calls for $534.3 billion for the base budget and $50.9 billion for the overseas operations.

“At a time of growing worldwide threats, the sequestration-level caps on defense spending are putting our national security at unacceptable risk,” McCain said in a released statement.

Military leaders told House lawmakers Tuesday that boosts to the OCO budget could help the military get around a painful funding crunch in the coming year.

“If that gets us over the hump, I am very in favor of getting over this hump,” Air Force Secretary Deborah James testified to the House Armed Services Committee.

But putting more money in the overseas emergency fund for everyday expenses could cause more problems, because the Army already has about $5.5 billion in OCO money that it is trying to move to its base budget, Army Secretary John McHugh said.

“We’ve got to move that money over at some point and that is a challenge,” he said.

Air Force Chief of Staff Gen. Mark Welsh said he is also concerned about increasing reliances on the fund but would prefer it to a cap.

“The problem with OCO funding is you can’t count on it over time … [but] anything is better than nothing,” he said.

There was widespread anticipation that Congress would tap the overseas war fund, known as OCO, as an escape hatch for the sequestration cap.

‘Budgetary gimmick’The OCO fund was born as a way to quickly pay for the wars in Iraq and Afghanistan while sidestepping sometimes difficult and time-consuming politics in Washington. It has become an easy way to pass defense spending that is not factored into the base budget or subject to the mandatory cap, which was part of a budget agreement in Congress to reduce federal spending and debt.

Gordon Adams, a professor of foreign policy at American University in Washington, said the House Budget Committee proposal allows it to claim budgetary discipline while also having the increases in defense spending it wants.

Adams is among critics of the OCO budget for funding wider military operations. He wrote in an email that the proposal by the House Budget Committee “would constitute the most cynical and fraudulent use yet made of the OCO budgetary gimmick.”

But it is likely the purely OCO approach by the fiscal conservatives in the House will face opposition and lead to a compromise with the defense hawks who want to keep base budgets high during what they see as an era of increasing danger around the globe.

“In the end, I expect a nudge upward in the base [defense budget], with a comparable domestic [spending] nudge upward, along with ample use of OCO,” Adams wrote to Stars and Stripes.