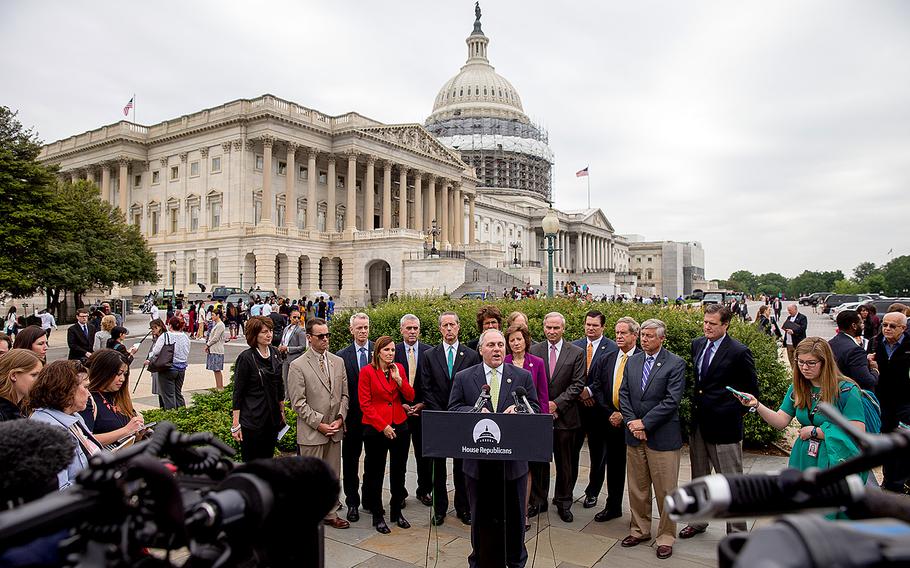 House Majority Whip Steve Scalise, R-La., accompanied by Republican members of the House on Capitol Hill in Washington, on Thursday, May 19, 2016, urges the passage of the National Defense Authorization Act. (Andrew Harnik/AP)

WASHINGTON — House Republicans on Thursday urged the president against a veto after passing an annual defense budget that dramatically increases spending on troops and military equipment.

The $602-billion bill was passed 277-147 with opposition from many Democrats. It pays for a bigger Army, the largest troop pay raise in years, and more training and equipment by taking about $16 billion from the war fund used to fight the Islamic State group.

The Republican-crafted plan will cause U.S. forces in Iraq, Syria and Afghanistan to run out of money in April unless Congress can cobble together new spending legislation. The White House issued a veto warning earlier this week, calling the budget maneuver a dangerous gimmick, and the Pentagon has said the House plan gambles with deployed military forces.

“I call on the president to drop his veto threat and stand by our troops and give them the tools they need to continue fighting in a very dangerous time in our nation’s history,” said Rep. Steve Scalise, R-La., the House whip, who gathered with leadership and members of the Armed Services Committee gathered in front of the Capitol.

The House Republicans said tapping the war fund, known as Overseas Contingency Operations, is necessary because the military is in the midst of a “readiness crisis” that has left it unable to face threats around the world.

Defense spending has dipped and leveled off after years of increases for the wars in Iraq and Afghanistan. Meanwhile, troops have seen little rest as operations in those countries continue, despite President Barack Obama’s promises to end U.S. involvement.

“By gambling with warfighting funds, the bill risks the safety of our men and women fighting to keep America safe, undercuts stable planning and efficient use of taxpayer dollars, dispirits troops and their families, baffles our allies, and emboldens our enemies,” the White House Office of Management and Budget wrote Monday in the veto threat.

Obama vetoed the prior defense budget in November after Congress pushed ahead with a similar plan to tap the war fund.

So far, the Senate has rejected the House plan but senators are set to debate and vote next week on their version of the defense bill, called the National Defense Authorization Act.

Eventually, House and Senate lawmakers must agree on a final budget deal, and Sen. John McCain, R-Ariz., the chairman of the Senate Armed Services Committee, has called for boosting the military budget.

“Sen. McCain has told me he wants to increase the funding while they are on the floor, so as I say, we’ll take it a step at a time,” said Rep. Mac Thornberry, R-Ariz., the chairman of the House Armed Services Committee and a lead architect of the House plan.

It blocks Army plans to cull 15,000 soldiers, instead adding 5,000 to the current end-strength number. The service announced plans last summer to reduce its active-duty soldiers from 492,000 to 450,000 over three years to save $7 billion.

Under the bill, all servicemembers would receive a 2.1-percent raise, which equals an additional $48 per month for an E4 with three or more years of experience. Last year, Obama ordered a 1.3-percent raise, keeping in line with increases that have been below private sector wage growth since 2011.

The military will require three to four years of increased funding to dig out of a fiscal hole that has left the Army with only one-third of its brigade combat teams ready to deploy for war, said Rep. Mike Turner, R-Ohio, chairman of an Armed Services subcommittee.

Air power also might be suffering as the numbers of ready aircraft drop and the Marine Corps and other services scavenge for spare parts. Rep. Martha McSally, R-Ariz., a retired officer and former A-10 pilot, said the United States used to have 130 fighter squadrons when she served and has now whittled that down to 55.

“We used to make fun of Soviet Union pilots. We’d hear stories about how they couldn’t fly, they didn’t have the hours to fly, so they were training by sitting and using airplanes on sticks,” McSally said. “We now have our own pilots in similar situations.”