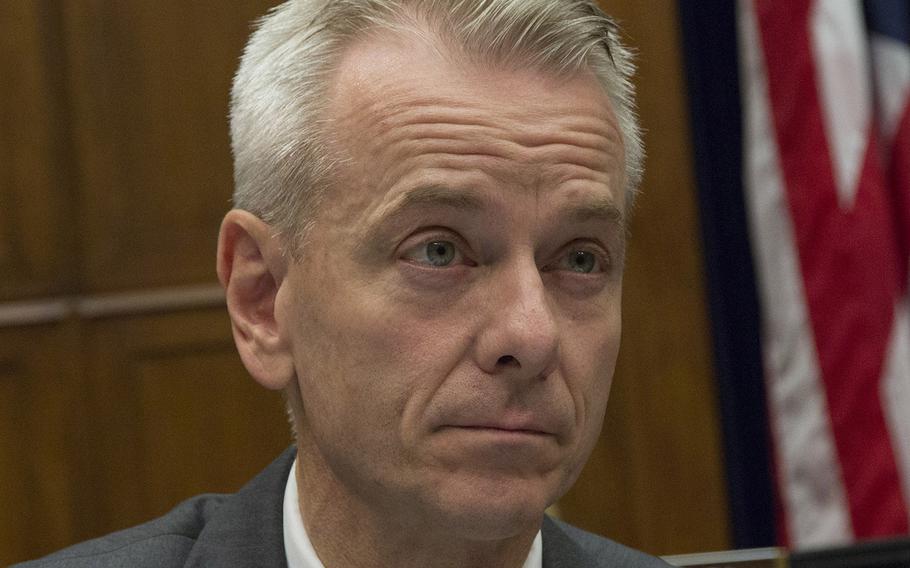 Buy Photo
Rep. Steve Russell, shown here in a 2015 file photo, has charged Democrats with a bias against the “warrior class” in their efforts for rejection of a special legal exemption for retired Gen. James Mattis to be defense secretary. (Stars and Stripes)

The Oklahoma Republican, an Army Ranger graduate who commanded infantry troops in Iraq, unloaded Thursday on lawmakers who were urging the House to reject a special legal exemption for Mattis to be defense secretary because it could undermine civilian control of the military.

Russell charged the Democrats with a bias against the “warrior class” in a fiery speech before the House Armed Services Committee. He called up other examples of military officers who served in civilian office under George Washington — and tangled with a Marine veteran Democrat who argued such examples date back to a time when Americans also kept slaves.

“We hear the bland words ‘civilian control of the military’ as if somehow those American citizens who bore the brunt of service in battle are somehow no longer entitled to their citizenship and are forever imprinted with some mark of Cain,” Russell said.

Democrats could not stop the Armed Services Committee from approving the legal waiver legislation Thursday afternoon, in a 34-28 vote that fell along party lines.

Mattis, who was picked to be defense secretary by President-elect Donald Trump last month, is widely considered one of the most talented generals of his generation. During a four-decade military career, he commanded the First Marine Division in Iraq and oversaw military operations in the Middle East until 2013 as the commander of U.S. Central Command.

The general has been retired less than the seven years required by federal law to hold the Cabinet post.

The full House was set to vote Friday on giving him a legal waiver and the top Democrat on the Armed Services Committee, Rep. Adam Smith of Washington, urged lawmakers to vote ‘no.’ The full Senate on Thursday overwhelmingly approved the exception, 81-17, and was set to confirm Mattis when Trump takes office Jan. 20.

Like Mattis, Russell also knows about serving in battle. He commanded the Army’s 1st Battalion, 22nd Infantry in Iraq, helping to capture Iraqi dictator Saddam Hussein, and retired as a lieutenant colonel.

“What are [Democrats] real agendas?” Russell said during an Armed Services hearing. “Do the objectors instead wish they could say, ‘We are afraid of the warrior class, we’re afraid they might cause a war?’ Is that it?”

He chided fellow lawmakers for worrying over military experience, saying veterans are more hesitant to get involved in conflict because they understand the costs of war.

“The greatest saber-rattling often seems to occur from bloviating politicians that have never worn the sword,” he said.

Russell cited numerous appointments of generals and servicemembers by President George Washington, a general during the Revolutionary War, and said 10 U.S. secretaries of state had senior military experience.

But Rep. Seth Moulton, D-Mass., a veteran who served as a Marine infantry platoon officer in Iraq, shot back against Russell.

“My colleague, a fellow warrior, Mr. Russell, raised in his very eloquent speech numerous examples of military leaders who have proudly served in our civilian government,” Moulton said. “Most of these are from the past. Some in fact served at time when we still had slaves.”

Democrats in the House and Senate have voiced concerns that a Mattis waiver could erode over civilian military control but the general remains deeply popular and is likely to be confirmed by the Senate.

He would be only the second career officer to ever receive a waiver. The first was Gen. George C. Marshall, who led the Pentagon in the early 1950s after being Army chief of staff during World War II.