House bill requires women to sign up for draft 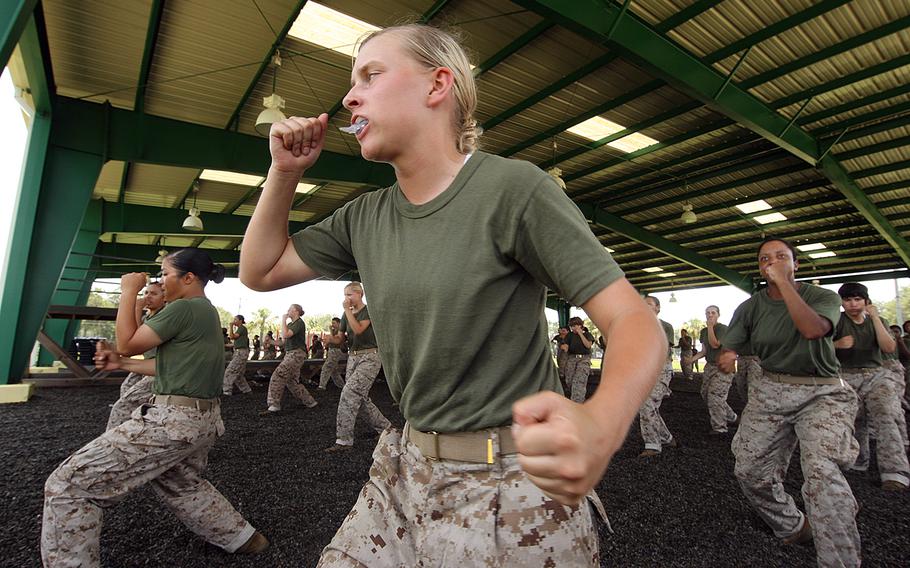 WASHINGTON — Two House Republicans introduced a bill Thursday requiring eligible women in the United States to sign up for the military draft, just days after it was recommended by the Marine Corps and Army.

Rep. Duncan Hunter, R-Calif., a Marine veteran, and Rep. Ryan Zinke, R-Mont., a retired Navy SEAL, filed the Draft American’s Daughters Act to stoke debate over the military’s historic move to fully integrate female troops into all combat roles. If passed, women from 18-26 years old would for the first time have to join men in registering with the Selective Service program and potentially be forced to fight in future wars.

“If this administration wants to send 18, 20-year-old women into combat, to serve and fight on the front lines, then the American people deserve to have this discussion through their elected representatives,” Hunter said in a released statement.

On Tuesday, Marine Commandant Gen. Robert Neller and Army Chief of Staff Gen. Mark Milley testified to the Senate that they believe there no longer should be an exemption in the draft for half of the country’s population now that the military is all inclusive.

The Marines and Army, along with the other service branches, were ordered by Defense Secretary Ash Carter to open about 225,000 combat jobs to women candidates – the last remaining occupational specialties that had barred female troops.

The decision was made despite research and reservations from the Marine Corps and special operations community, and without adequate debate among lawmakers, according to the two congressmen sponsoring the bill.

“My daughter is a damn good Navy diver. I know women play an invaluable role in war. Many times women can gain access to strategic sites that men never could,” Zinke said in a released statement. “However, this administration’s plan to force all front-line combat and Special Forces to integrate women into their units is reckless and dangerous.”

The Marines completed a study last summer that found women get injured more often and perform below males in combat. During an oversight hearing in the Senate on Tuesday, lawmakers repeatedly referenced the study and said they are worried the military could lower standards to accommodate more women in combat occupational specialties.

Zinke said the decision now means the country must contemplate changes to the draft. His bill requires women to register beginning 90 days after it is signed into law.

“This is a very important issue that touches the heart of every family in America, and I believe we need to have an open and honest discussion about it,” Zinke said.

Men, who historically filled combat roles, are required to register with Selective Service when they turn 18 years old in case a draft is again needed. The Supreme Court had in the past backed the exemption for women, but only because they were not expected to fill crucial combat ranks.

Millions of women might now suddenly and unexpectedly be required to register due to the Pentagon decision on combat roles.

Neller, who initially requested exemptions for women in some combat positions, said he thinks it is fair that women now face being called up to wartime service.

“Every American that is physically qualified should register for the draft,” said Neller, who had requested but was denied the exclusion of women in some Marine combat jobs.