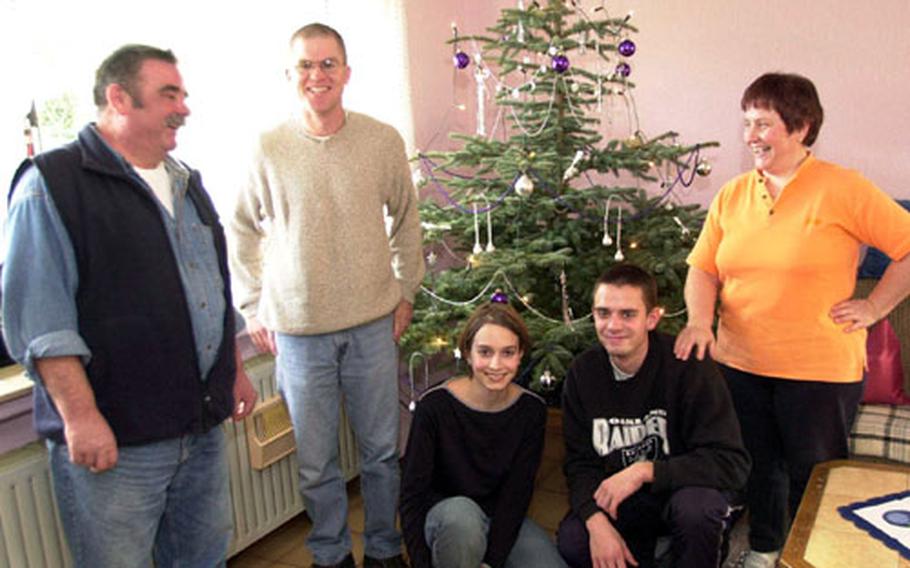 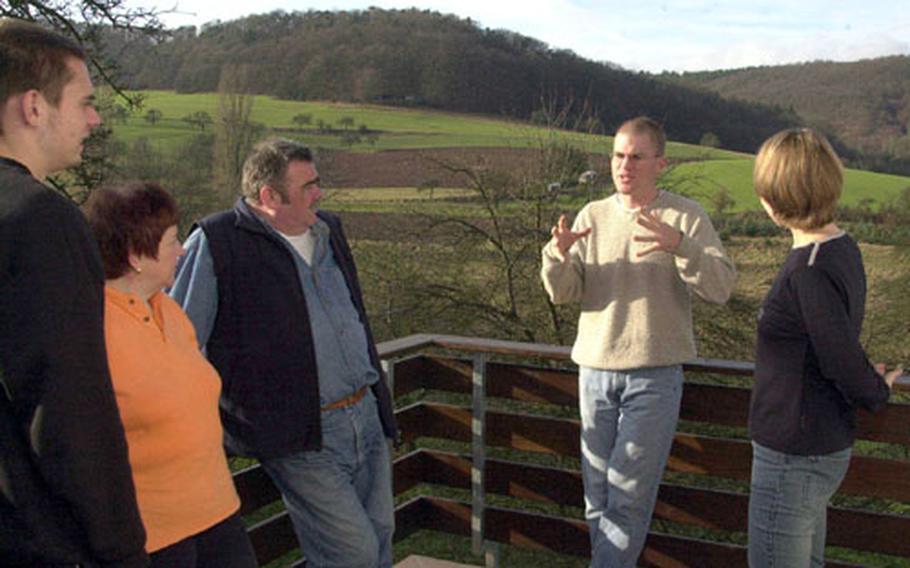 Spec. Matt Watson, second from right, makes a point to the Borger family after arriving at their home on a typically sunny Tuesday afternoon. The Borgers hosted Watson as part of a program placing U.S. soldiers in German homes for the holidays. (Terry Boyd / S&S)

BAUMHOLDER, Germany &#8212; What a difference a year makes.

Ask him about 2001, his last Christmas as a civilian, and Matt Watson is hard-pressed to remember. Last Christmas, Watson was a high school biology teacher hanging out with his family in Ft. Collins, Colo. It was just another Christmas. His mother, sister, brother and girlfriend at the time were there. A big turkey in the oven.

On Tuesday, Spc. Matt Watson, 34, 4th Battery, 27th Field Artillery Battalion, 1st Artillery Division, left Smith Barracks at Baumholder with the Borger family for Christmas in the small German village of Homberg. On Thursday afternoon, Watson was still making memories. Ask him next year about 2002, he said, &#8220;and I&#8217;ll remember to the [last] detail.&#8221;

Conversations until the wee hours of the morning.

Watson was one of 11 Baumholder soldiers to take advantage of Operation Good Cheer, a program matching U.S. soldiers to German families for holiday stays. For more than 20 years, the program has made it possible for unaccompanied soldiers to celebrate the holidays with people in the region, said Madeleine Dwoiakowski, 222nd Base Support Battalion public affairs officer.

Operation Good Cheer is about more than just Christmas. &#8220;We&#8217;ve put together Jewish soldiers with Jewish families,&#8221; Dwoiakowski said. French families cross the nearby border and participate. This year the program placed a Spanish-speaking soldier with Germans who speak Spanish, she said.

Watson&#8217;s holiday adventure began Dec. 19 with an introductory dinner at Haus Audenbach in Baumholder. Then Tuesday afternoon, Watson met the Borgers at the base&#8217;s rear gate, then drove 24 kilometers through some of southwestern Germany&#8217;s quaint villages and sweeping vistas to Homberg, population 250.

The pairing brought together unique hosts with a unique guest.

Watson is a thoughtful, well-spoken former high school biology teacher with a masters degree. The Borger family seems to prize meeting people from around the world. During 1996 alone, they hosted people from five different nations including Russia and Poland.

They seem to have a special affinity for American GIs.

The Borger family got involved in Operation Good Cheer in 1994 when the family matriarch, Hannelore, saw a notice in the Rhine Pfaltz newspaper from nearby Kusel. &#8220;It was my idea,&#8221; said Hannelore, an easygoing woman who exudes unselfconscious hospitality. &#8220;We decided it would be good for our kids to learn about other cultures.&#8221;

Apart from their international bent, the Borgers come off as the typical German family.

Patriarch Klaus works in manufacturing. His wife is a hausfrau.

Son Dennis, 21, also is an artillery soldier, though a less enthusiastic one than Watson.

The family had met Watson during the Operation Good Cheer introductory dinner in Baumholder the previous Friday night, and by Tuesday, there seemed to be instant rapport. As Dennis walks in wearing an Oakland Raiders jersey, Watson is flabbergasted. &#8220;Oakland! They just beat &#8230; my Broncos.&#8221;

Klaus doesn&#8217;t say much, but it&#8217;s clear that he understands English. As the family thumbs through their Operation Good Cheer scrapbook, with all the soldiers they&#8217;ve hosted, he sees a photo of their first guest, Jeremy Baker.

Baker enjoyed it so much that he came back just last summer for a huge backyard barbecue. &#8220;He sat outside singing Christmas carols in July because those were the only songs he knew in German,&#8221; Simone said.

On Thursday, Watson echoed his predecessor&#8217;s sentiments. He didn&#8217;t have enough room in his backpack for all the leftovers and gifts, including a beer glass engraved with, &#8220;Remembering Christmas 2002. The Borger family.&#8221;

What he also takes away is a new opinion of Germans.

Watson said he most enjoyed simply getting to know one another. &#8220;They were curious why I joined the Army,&#8221; he said, adding that he enlisted relatively late in life out of patriotism, and a desire to pay off college loans.

Watson&#8217;s photo now goes into the Borger scrapbook, along with soldiers from California, Montana, Pennsylvania, North Carolina and Louisiana.