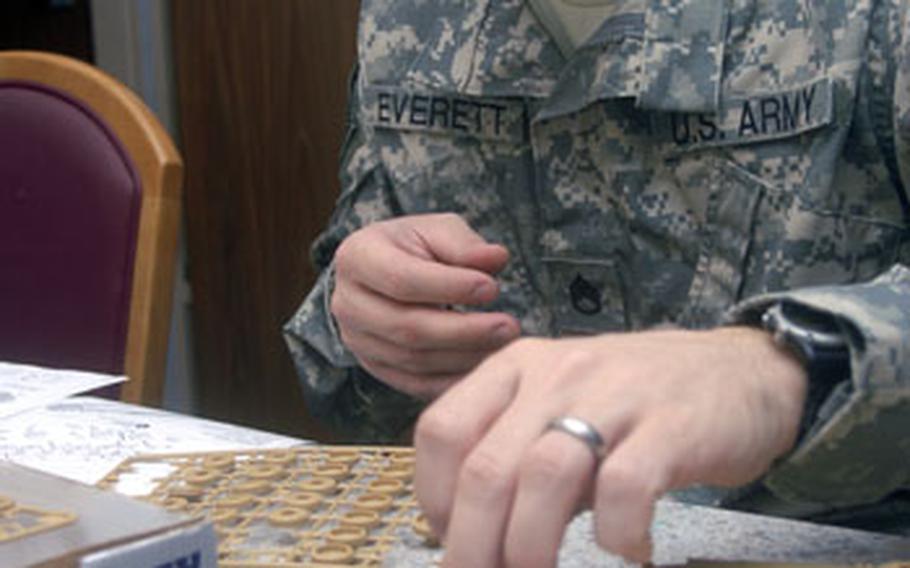 "It usually takes four people to lift this," Everett said as he snapped together a bogey wheel. "I can do it with one hand."

Everett, a tanker with the 4th Infantry Division&#8217;s 1st Battalion, 68th Armor Regiment who was injured in Iraq, is an outpatient recovering at Landstuhl Regional Medical Center. He was working on a plastic model of an Abrams tank Wednesday at the Help Hospitalized Veterans craft room.

Located inside one of two barracks housing the hospital&#8217;s Medical Transient Detachment, the craft room is filled with military and automotive models, leather kits and a variety of other craft kits &#8212; all donated through Help Hospitalized Veterans. The craft room at Landstuhl distributes about 500 to 600 kits a month.

Help Hospitalized Veterans is a charitable, nonprofit organization founded in 1971 by Army veteran Roger Chapin. It has distributed more than 23 million craft kits.

The group came under scrutiny in January when Chapin appeared before the House Oversight Committee over using donations for questionable spending practices. The organization has financial documents on its Web site, but the latest documents are from July 2007.

Questions over financial arrangements were the farthest thing from troops&#8217; minds Wednesday as they scanned the shelves of the craft room, talking about model hot rods, planes and engines.

The troops often give the crafts they make to their families as gifts, said Terri Sances, craft care specialist with Help Hospitalized Veterans at Landstuhl.

Additionally, Sances takes a cart filled with models and crafts up to the hospital&#8217;s wards so bedridden patients can work on the models, having something constructive to do with their hands.

"Somebody might have forgotten that they&#8217;re actually good at something. Working with your hands, it kind of brings it out."